New research by Christopher A. Williams, an environmental scientist and professor in Clark University’s Graduate School of Geography, reveals that deforestation in the U.S. does not always cause planetary warming, as is commonly assumed; instead, in some places, it actually cools the planet. A peer-reviewed study by Williams and his team, “Climate Impacts of U.S. Forest Loss Span Net Warming to Net Cooling,” published February 12 in Science Advances. The team’s discovery has important implications for policy and management efforts that are turning to forests to mitigate climate change.

It is well established that forests soak up carbon dioxide from the air and store it in wood and soils, slowing the accumulation of greenhouse gases in the atmosphere; however, that is not their only effect on climate. Forests also tend to be darker than other surfaces, said Professor Williams, causing them to absorb more sunlight and retain heat, a process known as “the albedo effect.”

“We found that in some parts of the country like the Intermountain West, more forest actually leads to a hotter planet when we consider the full climate impacts from both carbon and albedo effects,” said Professor Williams. It is important to consider the albedo effect of forests alongside their well-known carbon storage when aiming to cool the planet, he adds.

The research was funded by two grants from NASA’s Carbon Monitoring System. Williams and his research team — comprising data scientist Huan Gu, Ph.D., from The Climate Corporation and Tong Jiao, Ph.D. — found that for approximately one quarter of the country, forest loss causes a persistent net cooling because the albedo effect outweighs the carbon effect. They also discovered that loss of forests east of the Mississippi River and in Pacific Coast states caused planetary warming, while forest loss in the Intermountain and Rocky Mountain West tended to lead to a net cooling. 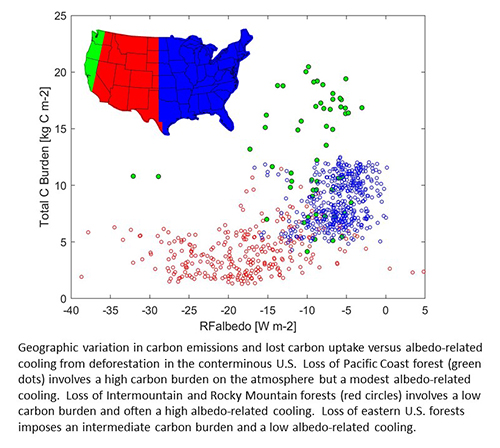 According to Professor Williams, scientists have known for some time that expanding forest cover cannot be assumed to cool the planet or to mitigate global warming. However, this has not always been appreciated broadly.

“If we fail to consider both the carbon and the albedo effects, large-scale tree-planting initiatives, such as Canada’s 2Billion Trees Initiative and The Nature Conservancy’s Plant a Billion Trees campaign, could end up placing trees in locations that are counterproductive for cooling the climate system,” said Professor Williams.

“It is all about putting the right trees in the right place,” said Williams, “and studies like ours can help identify where the potential for cooling is greatest.”

Every year, approximately one million acres of forest are being converted to non-forest areas across the lower 48 states of the U.S.; this is largely due to suburban and exurban expansion and development. Professor Williams’ team found that the net climate impact of a full 15 years of forest losses amounts to about 17% of a single year of U.S. fossil fuel emissions.

Williams’ research team used state-of-the-art satellite remote sensing to bring a detailed, observational perspective to examine this problem that had previously been assessed mostly with computer models. The three researchers pinpointed the locations of forest loss and identified what those sites became — urban, agricultural, grassland, shrubland, pasture, or something else. They then quantified how much forest biomass carbon was released to the atmosphere, and how much additional sunlight was reflected out to space. By comparing these two effects they measured the net impact of deforestation on the climate system.

The new datasets and methods used in Professor Williams’ study show that the tools are available to take the albedo effect into account. The Clark team hopes to generate actionable datasets to share with land managers and policymakers worldwide within the next one or two years, to help ensure that their tree-planting efforts focus on the right places and have the intended effects.