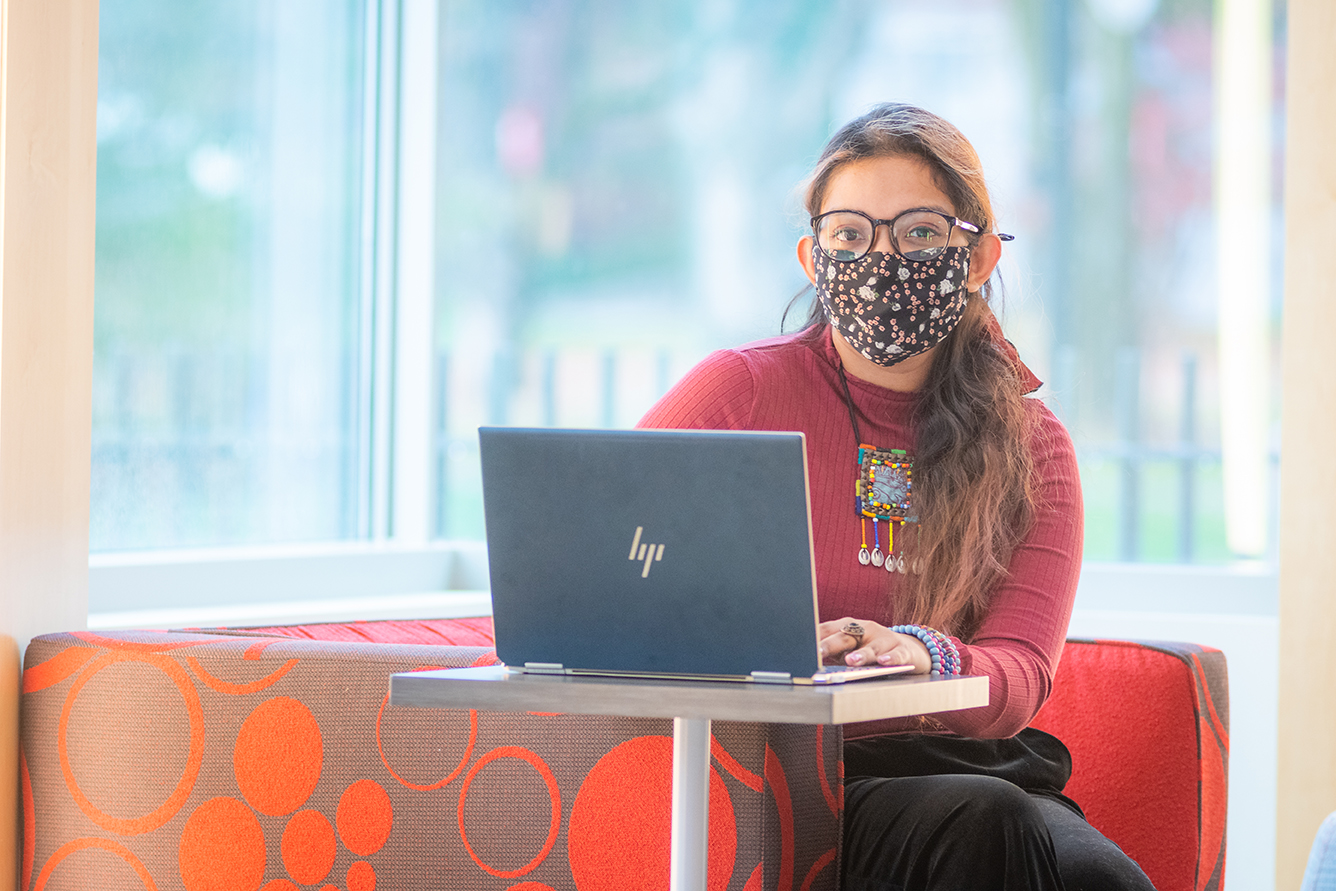 As climate change causes rapid warming across the globe, its effects can be seen most prominently in the Arctic, which is warming twice as quickly as the rest of the world. By 2050, scientists predict that sea ice will disappear from the Arctic Ocean during summer. In response to this forecast, Aandishah Tehzeeb Samara ’21 has conducted research to determine a possible correlation between melting sea ice and the Arctic hydroclimate.

“My research is aimed at bridging the gap that exists in current research in identifying the extent of cloud cover in the Arctic climate and the degree of the impact that inevitable sea ice disappearance is going to have,” Samara says. “Theoretically, there is a connection between the two process.”

An environmental science major and physics minor, Samara says the project connects her academic interests. This summer, she was awarded a LEEP Fellowship Award and the Wisniewski Award to conduct the independent research under the guidance of Professor Karen Frey. Her project, “Timeseries analysis of seasonal variations of Pacific Arctic Sea Ice-Cloud Cover Feedback,” explored the relationship between ice melt and climate.

“By creating a time series of sea ice and cloud cover in the same region, it is possible to understand the extent of the sea ice-cloud cover relationship in the Arctic,” she says.

The initial research laid the foundation for Samara’s senior honors thesis, which she is working on with Professor Frey.

Samara became interested in environmental science in high school. Growing up in Dhaka, Bangladesh, she witnessed the devastating effects of climate change first hand. Bangladesh is among the countries most vulnerable to floods, cyclones, and other environmental disasters displacing residents at an alarming rate. At Clark, she took Frey’s class, The Climate System and the Global Environmental Changes, which sparked her interest in the connections between seemingly unrelated aspects of the Earth’s climate.

“I was very specific to south Asia and climate change there, but the fact that the Arctic was such a broad and global phenomenon made me want to broaden my perspective,” Samara says. “Working on the Arctic was something that was bigger than me in that sense.”

Her project involved using TerrSet’s Earth Trend Modeler, aided by ArcGIS, to analyze sea ice data collected from eight Distributed Biological Observatories (DBO) in the Arctic over the last 20 years. She notes that melting sea ice means there are fewer bright surfaces to reflect sunlight back into the atmosphere, leading to greater solar energy absorption. Analyzing monthly, seasonal, and annual trends would help determine how climate change is impacting the sea ice-cloud cover.

“My hypothesis is that the decreases in sea ice leads to an increase in clouds due to the open ocean and increased presence of water vapor. Since these clouds also have high albedo, they reflect sunlight and regulate the climate feedback,” Samara says. “On the other hand, if the clouds did not have this effect as prominently, it would minimize the extent of clouds in the climate feedback. These are two very crucial scenarios to understand for accurately modeling climate change and would help guide analysis in the future.”

Samara plans to showcase her research during Winter Fest and at the American Association of Geographers annual meeting in the spring. At the end of her project, she will create a publishable paper in collaboration with Frey that will provide insight into sea ice-cloud dynamics systems for scientists modeling climates.

Throughout the summer, Samara met with Frey biweekly by Zoom and says the experience solidified her desire to pursue a career in academia. Next year, she plans to complete her master’s degree in GIS through Clark’s Accelerated B.A./Master’s Program.

“I want to become a professor, so having a female role model was empowering,” she says.

After obtaining her master’s degree, Samara plans to pursue a Ph.D. in atmospheric sciences.

At Clark, Samara is involved with numerous clubs and organizations across campus. She says the South Asian Student Association has helped her stay connected to her home country and find a “home away from home” beginning in her first year of college. Last year, she served as president of the organization. She has also worked with Information Technology Services, the Office of Multicultural and First Generation Student Support, and the Office of Student Leadership and Programming during her time at the University.

Last summer, she served as a physics fellow at the Clark Sustainability Labs. Working under the mentorship of Professor Charles Agosta, Samara helped code the website for a solar charging station, teaching herself Python, HTML, and Java in the process. “Programming languages are an important skillset in the current world,” she says, “and while the experience was intimidating, the opportunity taught me to become comfortable taking on new challenges.”

Samara is dedicated to making Clark’s campus more sustainable. With financial assistance from the Student Sustainability Fund she’s worked to expand the number of individual recycling bins in the residence halls and increase Clark’s recycling rates.

“Everyone at Clark has helped me work toward achieving my goals. My professors have been incredibly understanding. My advisers have been great listeners — hearing me rant about my struggles and applauding me on achievements,” she says. “The hard work of the community as a whole has pushed me to become a better version of myself — and I see role models in all of them.”

Through the Career Connections Center, you can find a job or internship, connect with employers and alumni career professionals, work on your resume, practice your interview skills, obtain advice, research careers, and much more. #clarkconnectsyou