Lost Season: Even with competition scrubbed, student-athletes stay in the game 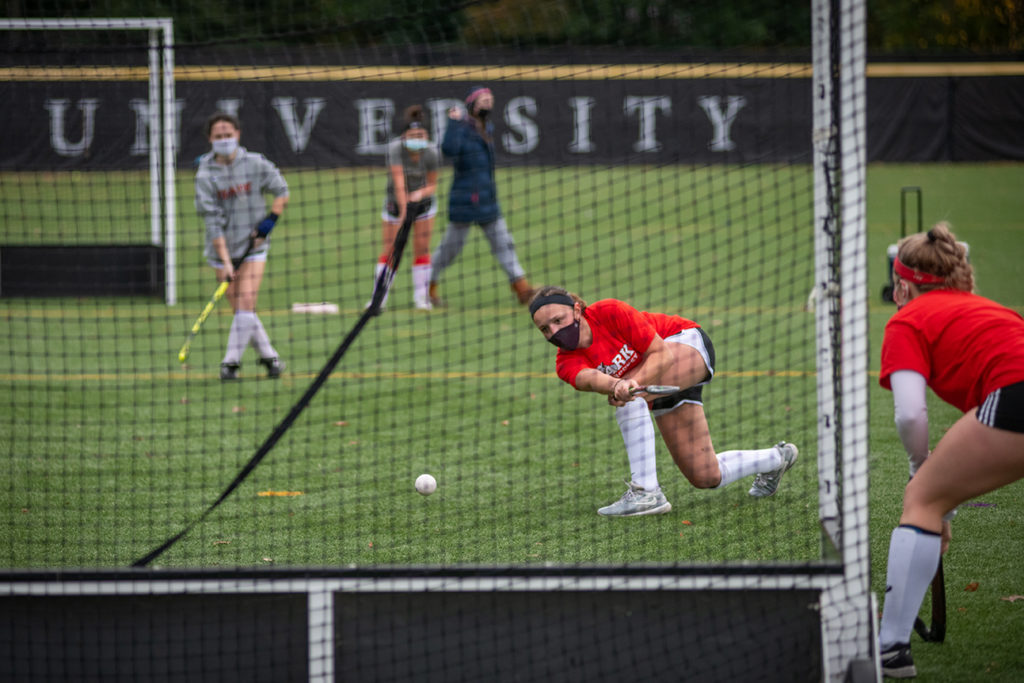 In a typical year, the defining moments of the fall athletic season would be upon us. The postseason picture would be crystallizing as Clark’s players and coaches entertain aspirations of competing for a New England Women’s and Men’s Athletic Conference Championship.

But 2020 has been far from typical. In August, faced with the COVID-19 pandemic, the presidents of the NEWMAC schools made the hard decision to cancel the fall sports season to protect the health and safety of student-athletes, coaches, and fans.

Yet even without games on their schedules, Clark’s fall teams continue to practice together — fine-tuning their fundamentals and displaying an admirable level of commitment while patiently anticipating the day they can once again compete in a Cougar uniform.

“The mood is very positive,” says men’s soccer captain Alex Nicholson ’21. “With so much of our lives now spent online, it’s a great escape to go down to the field and play. Everyone misses game days, but we’re all motivated to work hard and get better for when the team eventually can compete.”

Student-athletes are chasing their personal and team goals under the close guidance of Clark Athletics staff. Their routines include daily temperature and symptom checks, frequent COVID-19 testing (as with all Clark students), and other essential procedures to keep themselves and their teammates safe. They practice and train in small, tightly monitored groups, and they wear masks at all times. It’s worth it, they say.

“I think our team has responded well to this situation, and we’re trying to make the most of it,” says women’s soccer captain Abby Souza ’21. “We’re all grateful that we still have the opportunity to play together and be with each other, even if things are different than we’re used to.”

Their practice location frequently changes — from the soccer turf to the left-field corner of the baseball diamond, and sometimes even the cement of the Corash Tennis Courts. But regardless of where they play, Clark volleyball stays true to this season’s team mantra: All in. 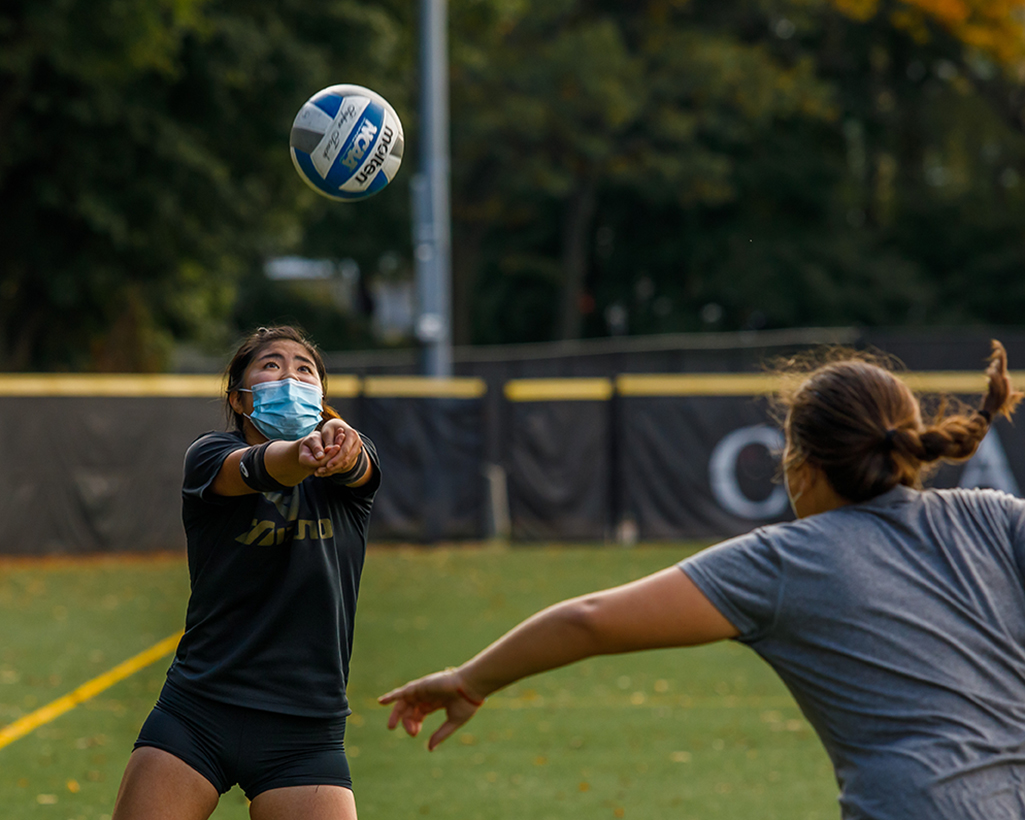 The 14 student-athletes train hard through rain and wind but do so with smiles beneath their face masks because they’re doing what they love.

“One thing we’ve been able to do this fall is slow things down and create teaching moments, because we’re all learning from each other,” says coach Mickey Cahoon, who is in his 14th year of coaching. “I think they have learned to adapt to the challenges that they can’t control.

Last fall, the Cougars showed promise, winning six straight games to close out the regular-season schedule. With seven dynamic first-year players added to this year’s squad, the team is creating a roadmap for the future.

“I am very proud to be a part of the women’s volleyball team with a lot of positivity, resilience, and competitiveness,” says Marimo Oka ’22. “We’ve focused on strengthening what we can do rather than complaining about what we cannot do.”

On the turf of Granger Field, men’s soccer head coach Matt O’Toole looks on from the sidelines at two separate units practicing. 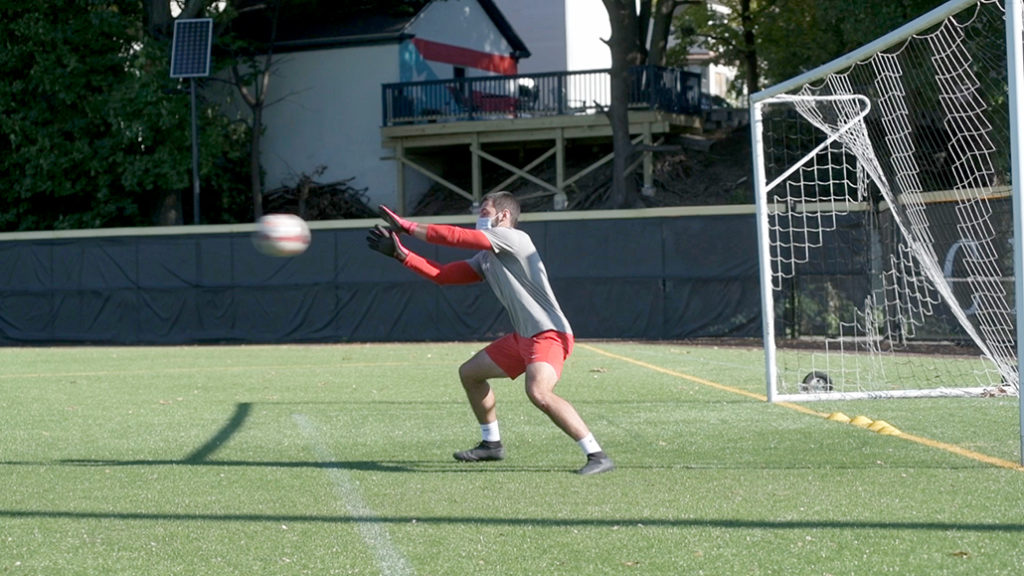 The “pods” are often divided by position, and the fragmented practices do not lend themselves to the complex tactical work essential to soccer. It’s an unfamiliar reality for O’Toole, whose program is a perpetual contender, as evidenced by another NEWMAC semifinal appearance last fall. But sports in the COVID-19 world, especially at the Division III level, are no longer about wins and losses. O’Toole is now intent on providing a means of both escape and structure for his 26 players.

“The big piece for us is the fact that we get to be together and navigate these new and uncommon waters as a group,” O’Toole says. “Our guys are doing their best to stay safe, continue their academics, and provide a sense of community to the best of their ability.”

Goalkeeper Melvin Vincent ’21 says that while it’s strange not to be playing intercollegiate games, there is purpose behind every practice. “If you see someone down or someone doesn’t have the motivation to come to practice, it’s about bringing them up,” he says. “Sophomores, juniors, and first-years all have something to look forward to, and that’s the way you’ve got to motivate them. And for seniors — this is something we’ve been doing our whole lives, so why stop now?”

The 2019-20 senior class left a lasting impact after posting a 45-24-6 record over four years, including three NEWMAC semifinal appearances. Normally, the 2020 season would have been defined by the voids left by departing players and the rise of new players to fill those positions. But without competition on the soccer pitch this fall, the metrics have changed.

“The biggest disappointment is just the lack of games, the ability to compete and have that feeling of winning,” O’Toole says. “Our numbers [of returning players] are a testament that our guys want to be back on campus, be part of the community, and be together on the field.”

When she became head field hockey coach in February, Kate Kurzanski could not have imagined how the first few months of her coaching career would unfold. 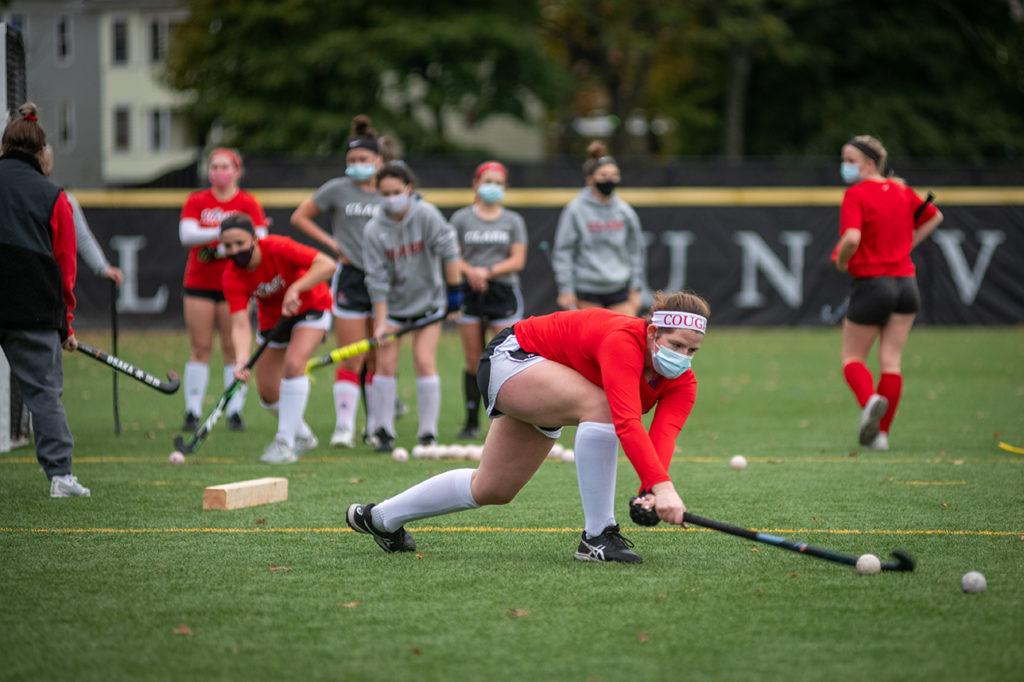 Instead of scrimmages, practices, and face-to-face interactions with her new team, the pandemic forced Kurzanski to find virtual avenues to connect with her players. It wasn’t until late-September that she finally got to hold in-person practices.

“I’m someone who likes to have fun and really cares about my student-athletes, so it was interesting to start virtually,” Kurzanski says.

She inherits a field hockey program that finished 8-10 last fall, one of its strongest seasons since 2013. With seven seniors and more than 10 first-year and sophomore players, she’s found that the suspended season is the perfect opportunity to continue building the Clark program.

“I’m trying to go back to the basic skills, but to make it fun,” she says. “I’m here for a reason: to pass my knowledge onto these girls.”

The student-athletes were led by three different coaches in three years, so welcome stability in the coaching position.

“Most of the team has experienced having a new head coach in our college careers already, so I think that the transition is going super well,” says team captain Carden Maloney ’21. “Everyone comes to practice motivated and open to new ideas and strategies to make Clark field hockey more competitive.”

As with every Clark team that has lost out on a competitive Fall 2020 season, field hockey is committed to making the best of 2020 while keeping an eye on 2021. If the virus can be kept in check, and safety can be maintained, perhaps the games will resume next year.

“This is a crucial time for player development,” Kurzanski says. “I’m hopeful and eager to see what everybody will be able to do when we can compete.”

On Nov. 2, President David Fithian joined the presidents and athletic directors of the New England Women’s and Men’s Athletic Conference to announce that due to the continued risks presented by COVID-19 the NEWMAC will not compete in a traditional conference schedule this upcoming winter season.