Justice heralded as an inspiration: ‘They couldn’t stop her.’
By Jim Keogh 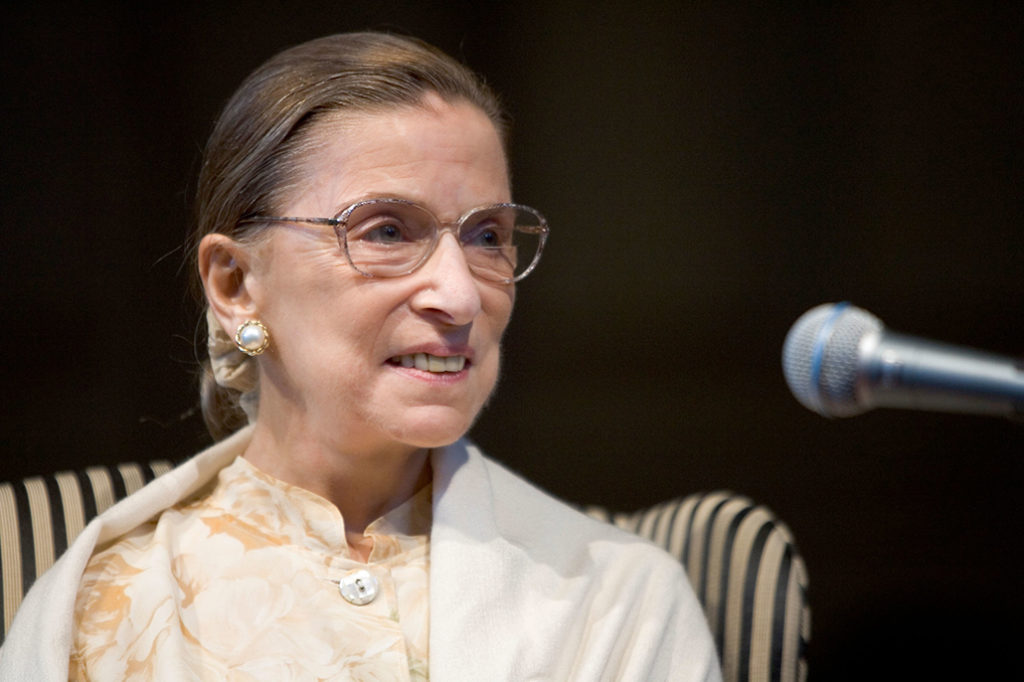 Massachusetts District Court Judge Margaret Guzman ’89 was in Washington, D.C., six years ago for the National Association of Women Judges convention when the group was brought to the Supreme Court Building for a meet-and-greet with some of the justices — one in particular.

“We were waiting for Ruth Bader Ginsburg like giggly teenagers waiting for the Beatles,” Guzman recalls. “She walked into the room, moving slowly and looking frail and diminutive. But the minute she greeted you she seemed to grow inches. Her voice did not quiver; she was curious, and she shook hands with every woman there.

“The NAWJ was formed in 1979, and there were judges in that room who represented a lot of ‘firsts’ for women — whether they were the first woman in their court, or the first chief. To watch Ruth Bader Ginsburg interact with them was truly empowering.”

Members of the Clark community have expressed an acute sense of loss in the wake of Justice Ginsburg’s death on Sept. 18, joining the nation to pay tribute to the jurist who made towering contributions in defense of those wounded by discrimination — especially women denied professional opportunities based solely on their sex. To many, she’d transcended matters of law to become an almost folkloric figure in a time of social and political tumult, and her passing evoked a wave of reactions from the public.

When he learned of Ginsburg’s death, Hank Fradella wept.

The professor and associate director in the School of Criminology and Criminal Justice at Arizona State University already held a special appreciation for Ginsburg’s impressive legal accomplishments. But there was something more about her, something personal, that touched him.

“Ruth Bader Ginsburg was confirmed to the U.S. Supreme Court while I was a third-year law student. Accordingly, none of the opinions she eventually authored were in the casebooks we used to study the law,” recalls Fradella, a 1990 Clark alumnus. “As a young lawyer, she began a crusade to dismantle the barriers women faced under the law. And as a law student who was passionately interested in constitutional law issues, I studied some of the key cases that altered the course of discrimination on the basis of sex. But I did not learn, until many years later, that the attorney who had successfully advocated for such changes was Ruth Bader Ginsburg.

“I owe her thanks for allowing me to live my life with a level of equality about which I did not even dream when I was a closeted college student at Clark in the 1980s. I celebrate her as a true trailblazer.”

Marlene McManus ’10, an immigration attorney in Boston, points to her favorite Ginsburg quote: “Fight for the things that you care about, but do it in a way that will lead others to join you.”

“I think this is so important to remember in our modern age of political flamewars and hashtag activism on social media,” McManus says. “Throughout her life and career as she challenged gender bias and fought for equality, RBG didn’t waste time shouting at those who disagreed with her. She gave us an example of how to fight with grace in the arenas that count, which challenges us to step away from our Twitter bickering, hit the books, and make tangible change happen. I will always admire her for her strategic balance of a quiet and unassuming persona, coupled with a ferocious and inexhaustible legal mind and unwavering ethical commitment.”

Ginsburg’s contributions from the bench will persist in the national memory, notes Erin Swift ’22, a political science major with a concentration in law and society. “She was an inspiration and a role model for young women everywhere.”

Mark Miller, professor of political science and director of the Law and Society program, served a fellowship at the Supreme Court in 1999–2000. There, he saw Ginsburg in action.

“She was the shyest person I ever met, and the fiercest advocate from the bench I’ve ever seen,” he remembers. “Justice Ginsburg also was the intellectual leader of the liberal bloc on the court — her opinions are amazingly clear and to the point.”

One of Miller’s former students, Joseph Jung ’20, who interned at the Supreme Court in 2018 and is now a first-year student at Harvard Law School, says he and his fellow students regard Ginsburg as a “guiding light” for the way she conducted her life and career. “She taught us to make time for what we care about in life, and to pursue those passions no matter what challenges seem to get in the way,” he says.

“For Justice Ginsburg, one of those passions was to change a system of law that historically treated people unequally based on gender. It is astonishing to think about how much she improved this country in the area of gender equality. And when she became a judge and eventually a Supreme Court justice, she fought for even more people and against more injustices,” Jung says.

Brian Stern ’88, a Rhode Island Superior Court Associate Justice, was serving as chief of staff for then-Gov. Donald Carcieri in 2008 when Rhode Island’s case against the federal government over Native American land rights went before the Supreme Court. He had a front-row seat to the thrust-and-parry between the two sides.

Most of the questions from the bench fell along predictable lines, he says. Ginsburg’s queries, however, took a less obvious tack.

“She was very quiet at first, listening to the arguments and the other justices’ questions. Then she began asking questions that looked at the case through a different lens, one based on her own life experiences and her decisions on equal rights and marginalized groups. The questions were directed at the lawyers, but they were really meant to make her fellow justices think it through.”

Miller, a longtime scholar of the Supreme Court’s history and its workings, can’t predict whether Ginsburg’s successor will be selected before the presidential election. That decision rests with the Senate, and while Majority Leader Mitch McConnell has vowed a speedy confirmation process, Miller is not convinced that majority approval of a candidate is guaranteed within the tight timeframe.

Guzman hopes that Ginsburg’s death will galvanize citizens to vote in the presidential election — particularly women, on whose behalf Ginsburg fought tirelessly throughout her career.

“They couldn’t silence her, couldn’t caricature her or diminish her. They couldn’t stop her,” Guzman says of Ginsburg’s detractors. “Maybe her death will help people understand that democracy is as fragile as a soufflé, and it’s only as good as we’re willing to make it.”