“With Dad,” a film created by two professors in Clark University’s Visual and Performing Arts Department, received its world premiere at the Rhode Island International Film Festival (RIIFF) and was recognized by a youth jury with First Prize for Best Documentary Short. Directed by documentary filmmaker Soren Sorensen, a lecturer in screen studies at Clark, “With Dad” tells the story of how photographer Stephen DiRado, a professor of practice, used his camera to capture and cope with his father Gene’s 20-year decline and passing in 2008 from Alzheimer’s disease. 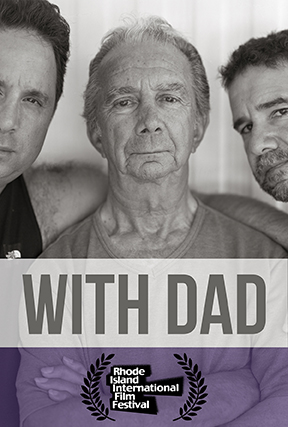 “It’s a huge honor that the film was even selected,” said Sorensen, whose first documentary, “My Father’s Vietnam,” had its world premiere at RIIFF five years ago. “To even hold a film festival under these circumstances required a Herculean effort, on the part of a diligent team of virtual organizers, interns, and volunteers all over the country. I’m beyond grateful that the film got to have its premiere in my home state.

“Winning an award from the youth jury is especially thrilling for me given that I spend the bulk of my career working with college students on their films,” wrote Sorensen. “I’m so pleased, and maybe a little surprised given the film’s focus on end-of-life issues, that it connected with them so deeply.”

The award ceremony was held on Sunday, August 9, and was conducted virtually due to the ongoing COVID-19 pandemic; it was hosted by RIIFF Programming Director Shawn Quirk and Executive Director George T. Marshall, who praised the film.

“Hearing the great news that a deeply personal film about my family’s way of coping with Alzheimer’s disease is resonating with a diverse audience simply brings tears to my eyes,” said Stephen DiRado, the film’s subject. “It is a documentary, delicately compiled through Sorensen’s vision, that can help so many others in similar situations in a multitude of empathetic ways.”

Stream “With Dad” for free through Sunday, August 16

Several of the photographs from DiRado’s “With Dad” photo series featured in the film have been published in a book of the same name available from Worcester-based Davis Publications. The book is available for purchase here.

Now in its 24th year, the RIIFF is considered to be the largest and most prestigious festival in New England. It is a qualifying festival for the Oscars (Academy of Motion Picture Arts & Sciences), the BAFTAs (British Academy of Film and Television Arts), and the Canadian Screen Awards (Academy of Canadian Cinema & Television), a distinction shared by only 10 other festivals worldwide. This year, the six-day festival was held as a hybrid event with drive-in and online screenings; it made available close to 300 films that included multiple world and domestic premieres from 54 countries and 34 states in the U.S. The films for this year’s RIIFF were selected from a record entry base of 6,672 submissions. For a complete list of RIIFF award recipients, and to view other films selected by the festival, visit www.film-festival.org.