What might his renowned Marist Poll tell us about Election 2020?
By Melissa Lynch ’95, MSPC ’15 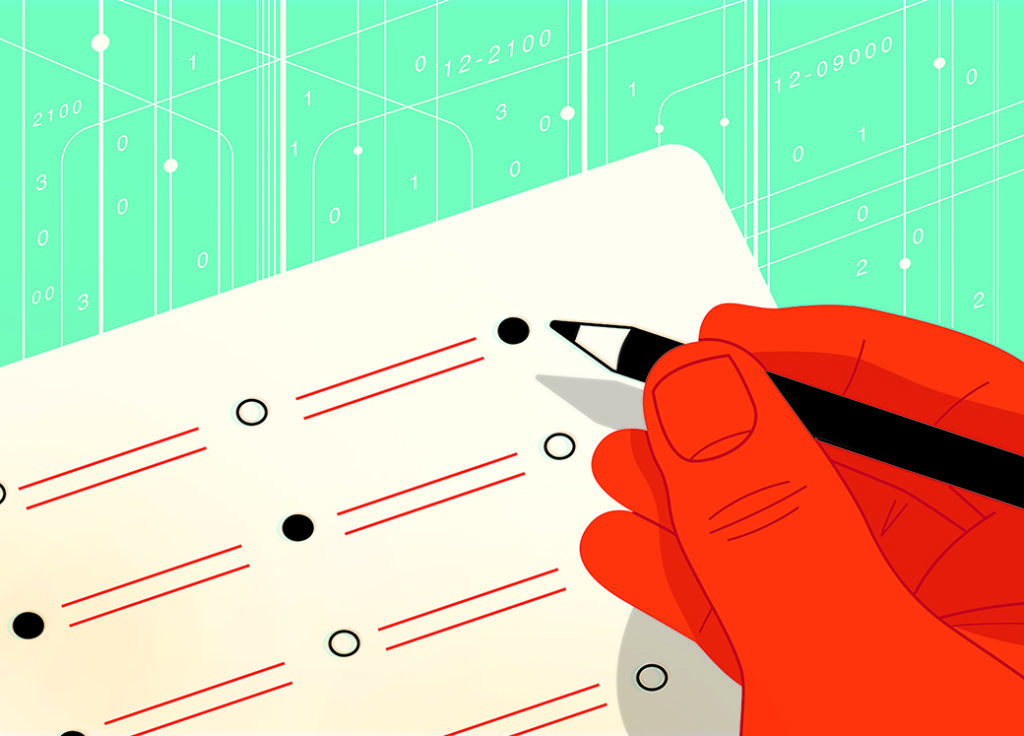 In a typical presidential election year, Lee Miringoff ’73 employs a small army of students to conduct polling from a phone bank at Marist College in Poughkeepsie, N.Y.

As the founder and director of the Marist College Institute for Public Opinion, home of the highly regarded Marist Poll, Lee Miringoff heads a research team of nine staff and approximately 300 students. They ask the questions that assess the opinions and attitudes of the nation’s voters on everything from their preference in a candidate to the importance of issues like climate change, the economy, and gun ownership.

Again, that’s in a typical year. There is nothing typical about 2020.

On March 17, one day after releasing the results of a survey of Arizona primary voters with NBC News, the Marist Poll, along with its NPR/PBS NewsHour partners, released a national poll of Americans’ views on the rising threat of the coronavirus. Of the respondents, 56 percent described the virus as a major concern while 38 percent believed the risks were being blown out of proportion.

The same day, Marist College announced it would soon shift to distance learning and require students to leave campus for the remainder of the semester. The exodus meant Miringoff no longer had students to staff the Institute’s phone bank, so polling stopped. And as the COVID-19 pandemic encroached on daily life and social distancing became the norm, the presidential campaign fell off Americans’ collective radar seemingly overnight.

“It’s understandable that the presidential race isn’t a priority,” Miringoff says. “People are more interested in health care. The media and the public have refocused.”

As of this writing, Miringoff — who has been conducting business from his dining room table — expected to have a reorganized remote polling system in place by the beginning of May. One advantage for a professional pollster is that people who are staying close to home during an extended period are both more available and more inclined to share their views.

“We found this to be true after 9/11,” he says. “People have a lot to say, and they’re eager to communicate it. In a way, polling will be easier.”

If you’re a fan of news and opinion programs, then it’s likely you’ve seen Miringoff at work. He’s a popular guest who is valued for dispassionately and precisely dissecting the public’s perceptions of the day’s major issues. The respected aggregate polling site FiveThirtyEight gives the Marist Poll top marks for accuracy.

The Marist Institute conducts its polls with media partners: NBC News for state polling, and NPR and the PBS Newshour for national surveys. “I respect the abilities of the journalists whom I’ve gotten to know, and I’m disturbed by the challenges to the media — which have always been there in different degrees and intensities — and to our institutions.”

Miringoff sees a strong level of engagement and connection among his students, both liberal and conservative. However, he worries about the echo chamber of social media.

“Finding middle ground is harder,” he says. “People on both sides of the political spectrum tend to be reinforced in their views right now. Campaigns have become more about rooting; they’ve become more gladiator in style. Both sides just go into the ring and club each other. Facts, reason, and logic don’t carry the weight they used to.”

When it comes to polling, however, data is king. And although many have criticized the 2016 presidential campaign polls as inaccurate, Miringoff maintains that isn’t the case.

“The polls did not have a bad day,” he says. “Our final national poll had Hillary Clinton winning by two points, which was within the margin of error, and she actually did win the popular vote by 2.6 points.”

The coming presidential election promises to be unprecedented, he notes, thanks largely to the pandemic’s influence on how the candidates will conduct their campaigns.

“There’s a good chance there won’t be any in-person conventions or rallies, and in-person voting in November is questionable,” he says. “The communication from each candidate will be different from anything we’ve seen.”

Lee Miringoff first considered attending Clark because of one simple piece of data: The University was relatively close to his hometown of Poughkeepsie. But when he visited the campus in his senior year of high school, the friendliness of everyone he encountered helped convince him this was the right school.

The Goddard Library became his special haunt. “I had my cubicle,” he recalls. “I pretty much lived on the fourth floor.”

In fact, he says, those who know him joke that he missed the social tumult of the time because of his marathon library sessions. A certain measure of insularity was nothing new for Miringoff. When he arrived on campus in the fall of 1969, his new classmates asked him if he’d attended the Woodstock music festival, which had taken place in Bethel, New York, just across the river from Poughkeepsie. “No,” he answered. “Why?”

His academic introduction to Clark University was the Problems of Philosophy course taught by the late Gil Markle in Atwood Hall. “He had a Ph.D. from the University of Paris and another from Yale; one was in physics and the other was in philosophy. He would strut down the aisle and the room would get quieter and quieter until he hit the stage, tossed off his leather jacket, and fascinated his students for 50 minutes.”

Miringoff’s most important classmate was Nancy Robinson, his future wife. This March, they were in the process of moving out of their home of 40 years when Miringoff discovered boxes of Clark memorabilia in the attic — including his notes from Problems of Philosophy.

“I didn’t understand much of what Gil Markle was saying,” he says. “Though it was interesting, it was way higher than I could get. I remember thinking, ‘Oh my god, is this college?’”

As a government and international relations major, Miringoff thought a career in government might be his destination. Instead, grad school beckoned. He earned a doctorate in political science at MIT. “I was 24, but I probably looked 15,” he remembers. “The idea of getting in front of a class was odd.”

The earliest version of the Marist Poll originated in his classroom in the fall of 1978.

Miringoff was teaching a course on voting behavior when a student asked if the class could do a poll. He wasn’t a fan of lecturing anyway, so he ripped up his course outline.

“I told them we would be studying theories of voting behavior with a practical application,” he says. The class recruited 100 of their fellow students to conduct exit polling on county election day. Several of the students later appeared on a local radio show to discuss the results.

“We found some unusual electoral outcomes, which we thought were a mess during the day but turned out to be accurate,” Miringoff recalls. “Voters elected their first Democratic county executive that day by carrying the most conservative areas of the county.”

The day’s experience provided an essential lesson all pollsters must learn, he says: Believe your data, because you’ve got nothing else.

It’s not all politics for Miringoff and the Marist Poll. In partnership with “Real Sports” host Bryant Gumbel, his team conducts surveys on issues like concussions in the NFL, athletes’ use of marijuana, and the biggest sports scandals and achievements in a given year. There’s no small irony that among his fellow students in his old Problems of Philosophy course were Wally Halas, who went on to serve as Clark’s athletic director and head basketball coach from 1974 to 1987 (and whose grandfather was founder of the Chicago Bears), and Jeff Lurie, now the owner of the Philadelphia Eagles. “If only I had known who was sitting in class with me,” he marvels.

One of the Institute’s most famous polls began 30 years ago, when Miringoff was “coming to terms with middle age.”

He had just turned 39 and decided to tack a question onto the end of a national poll he was conducting: “Do you consider 39 to be young, middle-aged, or old?” The next year, he posed the same question about the age 40. Miringoff has continued to ask the same question each year, with the figure corresponding to his own age. This year, he turns 69.

“It’s getting less funny,” he confesses.

Interestingly, he adds, “middle age” was last year’s winner, with “old” in second place and “young” in third. “Who are the people who think 68 is young?” he laughs.

The question is rhetorical. As Miringoff has learned, taking the temperature of public opinion means the results may surprise you.

Want to know more about polls and polling? Lee Miringoff is a cohost of “Poll Hub,” a podcast that goes behind the science to explain how polling works, what polls really show, and what the numbers really mean.