‘I can see beyond the wall’

Professor Shelly Tenenbaum brings her expertise into prison classrooms, where her students embrace higher learning as an antidote to the street’s harsher lessons
By Jim Keogh 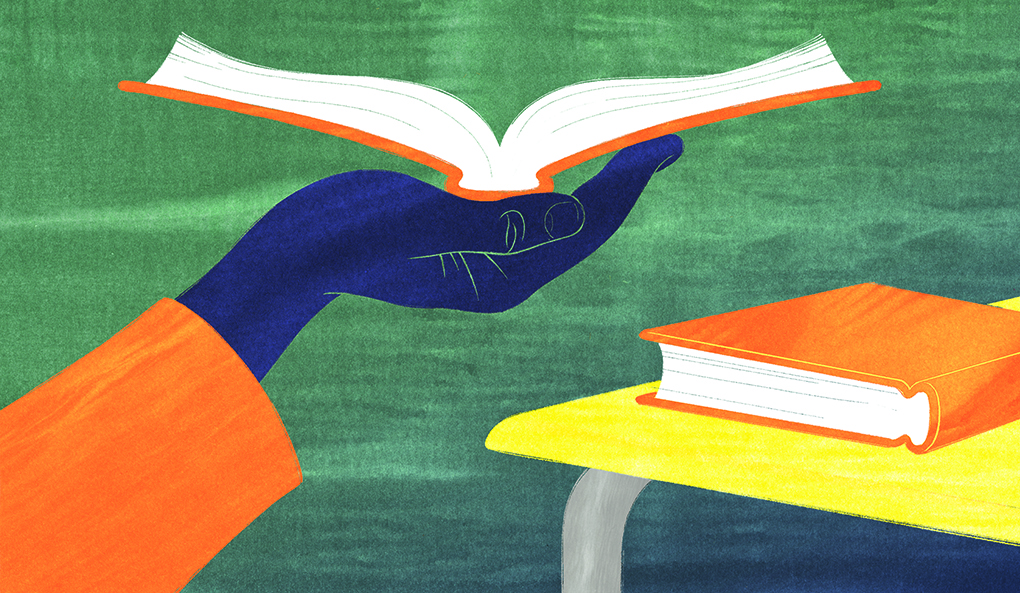 ­Concord, Massachusetts, is quintessentially New England. Author Louisa May Alcott made her town the setting of “Little Women.” Henry David Thoreau roamed the shores of Walden Pond in gentle pursuit of a life lived simply. Some of the earliest shots fired in the Revolutionary War rang out here. The homes are historic; the hills roll.

The Massachusetts Correctional Institute at Concord, a medium-security prison, is a less-storied piece of the town. Situated beside a well-traveled rotary on Route 2, MCI–Concord announces its purpose well before you’re close enough to read the sign. Brooding stone walls, razor wire, and guard towers tell you that time is marked slowly by the men inside.

Of the truths that can be spoken about this imposing compound, one is the truest of all: Few people enter MCI–Concord voluntarily.

Professor Shelly Tenenbaum is one of them.

On a gray mid-November morning, Tenenbaum walks into an MCI-Concord classroom where she’s greeted by 12 men seated at student desks. They sit facing her in a single horizontal line, their backs against a wall.

Several of the men have been at MCI–Concord for decades; some are serving life sentences without the possibility of parole. They have access to the classroom through the Emerson Prison Initiative, a program launched in 2017 by Emerson College to provide a rigorous liberal arts education to a cohort of incarcerated men. Through EPI, Tenenbaum, professor of sociology and director of Clark’s undergraduate program of Holocaust and Genocide Studies, has been teaching the men about global genocide, an aspect of the human experience to which most of them have never been exposed.

Today is a special occasion. Tenenbaum has brought with her President David Angel and Dean of the College Betsy Huang to listen and then engage the students in a discussion about their lives and the value of pursuing an education in prison.

One by one, the men tell their stories. Each account differs slightly in the details, but common themes circulate: a childhood spent in poverty; an early introduction to drugs; the embrace of life on the street and disregard for formal institutions, school among them. None of the men expresses self-pity or insists on innocence. They acknowledge the poor choices they made, yet also are aware of opportunities not just lost but never presented — opportunities that perhaps could have kept them outside the walls.

But this session is not about the past. These students are keener to talk about the meaning behind their learning. They describe classroom experiences that serve as a powerful and affirming countermeasure to the years they spent convinced they were incapable of acquiring new knowledge and fresh perspectives.

Twenty years into a life sentence, Rick* notes he’s read 500 books in prison. Classes like Tenenbaum’s have “helped me understand that what I do does matter; that there’s value here. I’ve learned to look at the world through other lenses, which is empowering.”

“For a long time I didn’t understand the value of education,” Michael says. “It wasn’t until I hit rock bottom that the desire for self-education turned into a desire for higher education. I’m learning the mechanics of writing now, and how my experiences give shape and life to my voice.” In his eight-page memoir, he writes: “Here I sit, raised hand, eager to question, to learn all about the things that had escaped me thus far.”

Huang asks the men to consider questions of identity. Do they feel defined by their present circumstances? How are they negotiating limitations and regarding new prospects?

Employing terminology from her days teaching fiction to Clark undergrads, she describes the men as “round” rather than “flat” characters, capable of changing their own narratives rather than succumbing to inertia. “You’ve thought about the massive disruption in your life that brought you into this space, and now you’re thinking about how to remake yourself,” she says.

Education is a transformative force in any setting, Angel tells the students. He points to the bond formed between Clark and residents of the Main South neighborhood, a relationship shaped by mutual respect and willingness to learn from one another.

“Thirty-five years ago, people were urging Clark to move out of our neighborhood. Instead, we said, ‘We’re going to link our success to that of our community,’ especially through educational opportunities for neighborhood children. Their parents could have been your parents at one time — they hadn’t dreamed of the possibilities. This partnership has taught us how important this work is.”

The men nod in assent and applaud. The discussion group breaks up shortly after. Time is limited, and there is still a class to be held.

Several years ago, Shelly Tenenbaum reached out to the director of the Boston University Prison Education Program and offered to teach a comparative genocide course behind the walls.

“When the United States has the highest incarceration rate in the world, with over two million Americans behind bars, how can we not care about the people who are locked up?” she asks. “I thought teaching in a college program in prison was a small contribution I could make.”

Tenenbaum was anxious the first day she entered MCI–Norfolk, a state prison located about 45 minutes east of Worcester. The long list of rules and procedures regarding acceptable clothing and behavior, in addition to the extended entry/screening process, was daunting. “But when I got to the classroom, I was totally comfortable,” she recalls. “It felt like any other classroom.”

This year, she has partnered with the Emerson Prison Initiative, which is modeled after the highly successful Bard Prison Initiative in New York, and moved her teaching locale to the Concord facility. Her students, ranging in age from their twenties to late fifties, display “confidence in their ideas,” she says. “They ask challenging questions, and when they disagree with each other, or me, it makes for an exciting intellectual environment. The ideas they explore in their classes give them a framework for understanding their own lives, but also for grappling with complexity — with the gray zones.”

A 2019 study by the Rand Corporation, as reported in Rand Review, found that “inmates who participate in any kind of educational program behind bars — from remedial math to vocational auto shop to college-level courses — are up to 43 percent less likely to re-offend and return to prison.” They also appear to be far more likely to find a job after their release.

Despite those encouraging results, access to prison education programs is limited. The students participating in the Emerson Prison Initiative need a high school diploma or GED/HiSet equivalent and must complete a rigorous admissions process — including a timed essay and in-person interview — to seek enrollment in the program, from which they can earn an Emerson College degree.

Tenenbaum recalls a former student needing six tries before he finally was admitted to the BU program. “These students have no expectation of ever attending college,” she observes. “That may be why they work as hard as they do and convey such a deep appreciation for this chance.”

Tenenbaum routinely recruits other Clark faculty, graduate students, and undergraduates to join her in the prison classroom, where, in addition to Comparative Genocide, ­­ she’s taught Race and Autobiography. Samantha Lakin, a Clark Ph.D. candidate with deep expertise in the genocide in Rwanda, last year worked as Tenenbaum’s teaching assistant in the prison program. Years ago, Lakin taught in New Orleans through Teach for America; she’s now a research fellow at Harvard Law School and has been an active public speaker on issues of education justice. 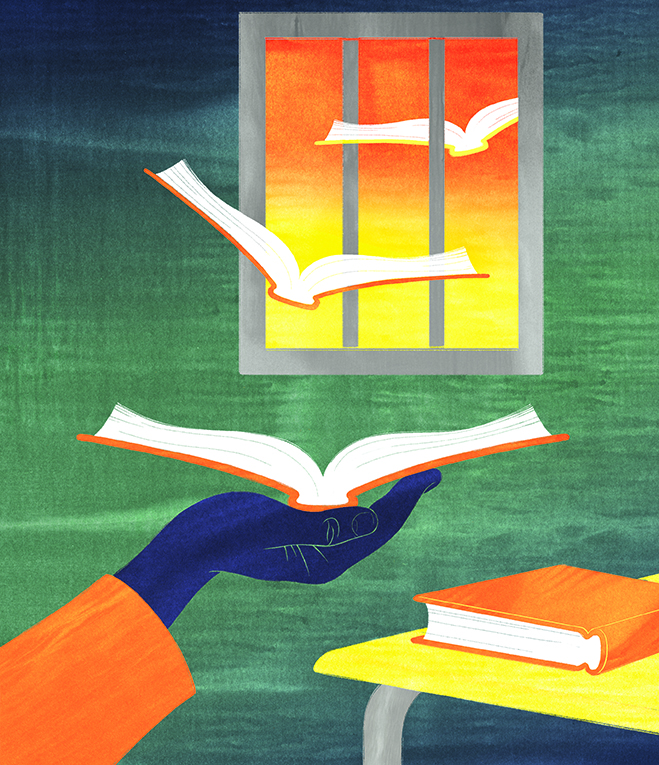 “Working in prison helped me return to issues I’d come to feel jaded about, or that I’d thought I’d let other people address,” Lakin says. “The students understand their choices, but they also understand the structural inequality of the system they’re products of. They can make different choices when they get out, and education is a critical component of that process.

“We discuss hard subjects,” she says of the genocide course. “A lot of the students didn’t like the nature of some of the course content, and I don’t blame them — genocide is gruesome. They’d say, ‘My life is disturbing enough.’ My challenge was to communicate to them and push back at them about why this topic is important.”

Claude Kaitare ’05, who survived the genocide in Rwanda and now teaches with the Facing History and Ourselves organization, also has assisted Tenenbaum inside the classroom.

“When they hear about my experience, the usual reaction is one of shock,” he says. “But in my more than two decades involved with genocide education, I’ve found prison students eager to learn more once they realize they know a survivor.”

Teaching inside a prison may be the most uncommon experience offered to Clark students — yet there is no shortage of takers. For the past three years, student instructors have been prepared for their moment through the Petey Greene Program, which trains volunteers to tutor incarcerated people in a host of settings.

“It’s a very Clark thing,” Merly says of the work. “Clarkies love learning and care about inequity in education. I feel like I’m contributing in a small way, but also in a powerful way.”

Tourgee works with a young man whose appreciation for his tutors’ efforts is tinged with regret for the path he’s taken and for what might have been. “When we come into the room he gets sad,” she says. “He tells us, ‘I could have been you.’”

Shelly Tenenbaum maintains a rare perspective on humans’ ability to persevere through despair. Her parents survived the Holocaust death camps and found each other while searching for missing family members in the Polish city of Krakow. Their experiences inspired her to research and teach about the human capacity for brutality — lessons she imparts to men who have been brutal, and who have been brutalized.

“The genocide course raises tough questions in any context, but maybe even more so in a prison classroom than at Clark,” she asserts. “We talk about how ordinary men commit murder; we talk about dehumanization in Auschwitz. The students have had powerful responses to readings by Elie Wiesel, Terrence Des Pres, and Tadeusz Borowski, readings that gave some of them nightmares. When they’ve written their autobiographies, childhood trauma, violence, racism, and deep remorse toward their victims and their victims’ families, as well as toward their own families, often surface.

“I am not by nature a hopeful person and am skeptical of triumphalist narratives,” Tenenbaum continues. “But my students in prison have taught me to believe in the capacity for transformation.”

Louis is one of those students, though he doesn’t talk about transformation or triumph. These are not words that come naturally when you’re serving a life sentence in the heart of Concord, Massachusetts.

He uses a simpler vocabulary to describe the impact of the Clark professor who walks through the prison doors to teach him things he’s never known.

“In a way, education has become my career,” Louis says from his seat in Tenenbaum’s classroom. “I think differently; I see things differently.”

He gestures toward the window and the November sky it frames.

“Now when I look out that window, I can see beyond the wall.”

*All names of incarcerated students are pseudonyms.