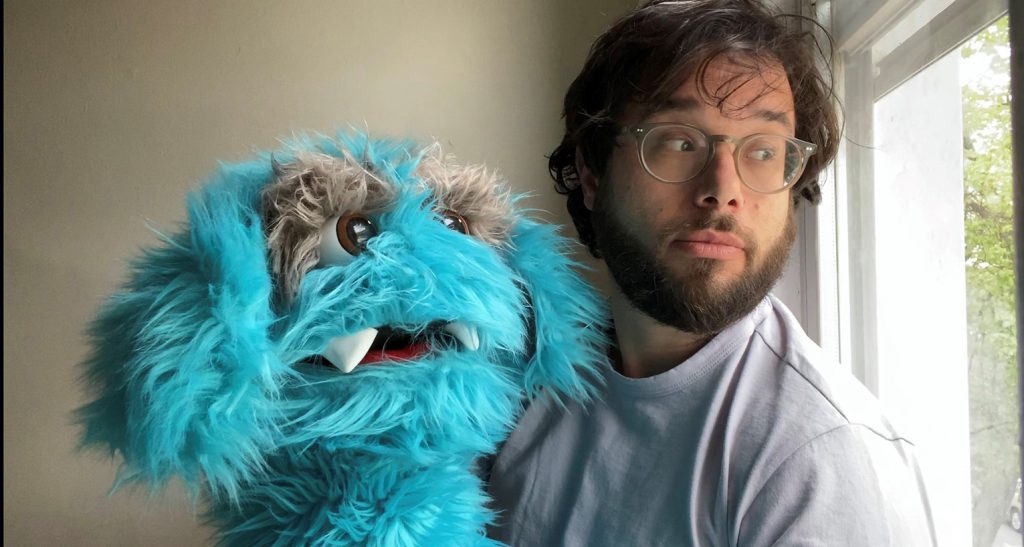 When Avi Steinhardt ’03 acquired Louie — a furry, blue monster puppet — about a year ago, he didn’t know why.

The Brooklyn-based psychotherapist didn’t have a background in puppetry, but had suddenly found himself wanting to own a monster puppet. As someone deeply influenced by the work of American psychologist James Hillman, who wrote that images, dreams, and fantasies are the language of the soul, Steinhardt decided not to brush off the desire. Instead, he commissioned Louie from a puppet and prop builder in Washington.

“I thought it was interesting that I seemed to want this in my mid-30s, but I couldn’t shake it,” he recalls.

Steinhardt didn’t have plans for the puppet at first. But once New York City was issued a stay-at-home order to stem the spread of COVID-19, he began filming videos with Louie in his apartment and posting the short clips on his “Monster Insight” Instagram and YouTube pages. Last month, the videos were featured on Spectrum News NY1’s “Acts of Kindness” segment.

“We put the first one out there totally spontaneously and the response was really tender right away,” Steinhardt recalls. “People were like, ‘Thank you, I needed that, please keep doing this.’ That was very touching, so then it immediately felt like a service I could offer.”

Steinhardt’s videos are never planned. Some are based on themes that emerge during therapy sessions with his clients. Other times, he and Louie will recite a meaningful poem or sing a song. Recently, Steinhardt has been using his platform to speak out about racism, systemic oppression, and police brutality.

“Rather than bringing comfort, per se, I think the videos have more to do with compassion and witness and encouraging people to be heartened by things that are happening — even encouraging them to have their hearts broken by what’s happening,” he says.

Steinhardt was stunned when NY1 reached out to him. He believes one of his followers submitted his videos to the television station, and anchor/reporter Kristen Shaughnessy thought they would be a perfect fit for “Acts of Kindness,” which highlights good deeds and benevolence in the community.

“It got me about 15 new followers,” he says with a laugh.

At Clark, Steinhardt majored in sociology and minored in human services — a program that was run, at the time, by Professor Nathaniel Seale. Steinhardt said Seale’s approach to working with people had a profound impact on him, setting him on the path to becoming a therapist.

“I remember him being extraordinarily present with what was happening in the room, which is a big part of how I work. He also was nonjudgmental and really good at getting people to open up,” he says.

After graduation, Steinhardt moved to London for a year and took a job as a social worker. He returned to the United States and settled in Brooklyn, where he became a case manager. Steinhardt later enrolled in graduate school at NYU, earning his master’s degree in social work.

He received further training as a Gestalt therapist at the Gestalt Institute of New England and now runs his own practice in Brooklyn.

“I love connecting with people — it makes me feel alive,” Steinhardt says. “I knew that I wanted whatever I did to feed my soul and make a positive impact on the world. I knew I didn’t want to chase money.”

In a recent video, “Pandemic to Pandemonium,” Steinhardt and Louie discuss the unrest occurring across America and the globe. With the relentlessness of COVID-19, breakdowns in leadership, and protests throughout the country, Steinhardt notes that it often feels strange to focus on our personal struggles when there’s so much adversity around us.

But Steinhardt also recognizes the ways in which we’ve been fortunate. He’s thankful he can support his wife and 3-year-old daughter — who makes an occasional appearance in his videos — and spend time in nature, and also find a new artistic endeavor with his pandemic puppetry.

“Being able to slow down is a gift I think a lot of people have recognized,” he says. “It’s amazing how even in the endlessness of lockdown, there’s access to a deeper time that’s somehow available to us. There’s definitely something to slowing down that feels nourishing, even as we miss each other.”