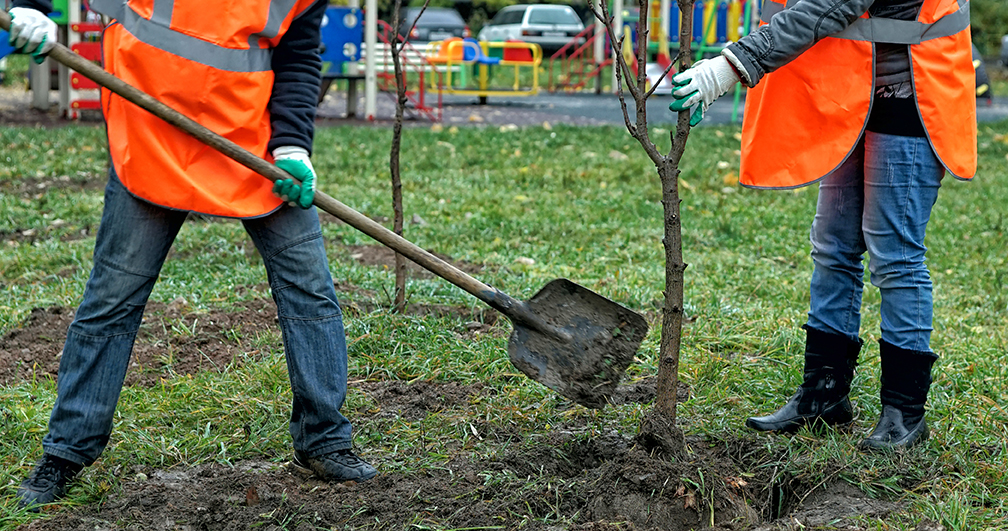 Cities and towns that undergo development can face a rise in air pollution and an increase in urban heat islands, areas that are significantly warmer than the surrounding rural zones due to human activity. Trees can reduce these hot areas — as long as they are planted in the most appropriate locations. Two Clark students completed projects this spring exploring the best places for tree planting in two Massachusetts communities.

Despite the cancellation of in-person classes and a hectic shift to virtual learning to finish the spring semester, Jessica Martinez ’20 and Morgan Dufour ’21 created posters in Professor John Rogan’s Advanced Remote Sensing course that were sent to the Massachusetts Department of Conservation and Recreation and the Opacum Land Trust.

Martinez, a geography major with a specialization in earth system science, identified tree planting locations in Southbridge, Mass., that would mitigate the effects of pollution and reduce the “urban heat island effect.”

“Growing up in Amherst, I saw the center of our town become more and more developed to accommodate the growing college campuses,” says Martinez. “I chose to study land surface temperature in Southbridge because it is something that I find not only interesting, but important.”

Through her research and GIS mapping, Martinez identified four areas in Southbridge as ideal tree-planting zones. The urban heat island effect was visible in each of these zones — and all four had markedly higher land surface temperature, many impervious surfaces like pavements and parking lots, and a low level of tree cover.

“Future street tree planting in these areas will help not only to mitigate high land surface temperatures but to offset issues such as air pollution that are present in developing towns,” explains Martinez. “This topic is relevant and important for every expanding town or city to consider.”

“I chose this topic because of its connection to public health and urban heat islands,” she says. “Most of Ware is heavily forested, but the settled parts are dense and have very little canopy cover.”

The research resulted in a general understanding of the parts of Ware with the highest temperatures and lowest existing canopy cover, and the identification of sites and road segments with the most to gain from tree-planting efforts. The addition of trees along these streets would build out the urban canopy cover in the town, resulting in land surface temperatures closer to the cooler forested areas of the city.

Both Martinez and Dufour credit their success in the course to Rogan and their teaching assistants, geography doctoral students Nick Geron and Marc Healy.

“While transitioning from a classroom setting to a home one did require constant adaptation and patience, Professor Rogan and our TAs were there for me the entire way and were available for weekly Zoom check-in meetings,” says Martinez.

“Professor Rogan was very helpful throughout the project,” agrees Dufour. “He checked in frequently and was very quick to respond to emailed questions. He also connected me to the TAs from the class, who were both absolutely instrumental in my success with the project.”

According to Professor Rogan, the work Martinez and Dufour completed will be incredibly influential for the cities of Southbridge and Ware.

“The maps and recommendations made for each city will assist the foresters in planting trees along streets to provide the most cooling benefit and also the greatest benefit for air quality,” he explains. “I will also use the maps to place temperature sensors and air quality sensors this summer to track the long-term benefits of the planted trees.”

Ed Hood, executive director of the Opacum Land Trust, was appreciative of the work done by Martinez. “The analysis by the Clark University students quantifies and dramatically demonstrates the positive impact of, and need for, increased forest cover and urban trees for Southbridge,” he says. “This will be an important tool for us working with the community to document the critical value of our work.”

In addition to helping each city learn the best ways to plant trees, the projects helped each student understand more about what they hope to do in the future.

“Post-graduation, I hope to work on trail maintenance and conservation in preserved parks and lands,” says Martinez. “My research in advanced remote sensing has further expanded my passion for GIS, and I hope to incorporate it in my future career as well.”

“After graduation, I am hoping to enter Clark’s GIS Advanced Degree Program,” says Dufour. “This project is another step toward achieving that goal; it is an example of how I am already using GIS, and the fifth-year program will help me advance my skills.”

The sounds of science