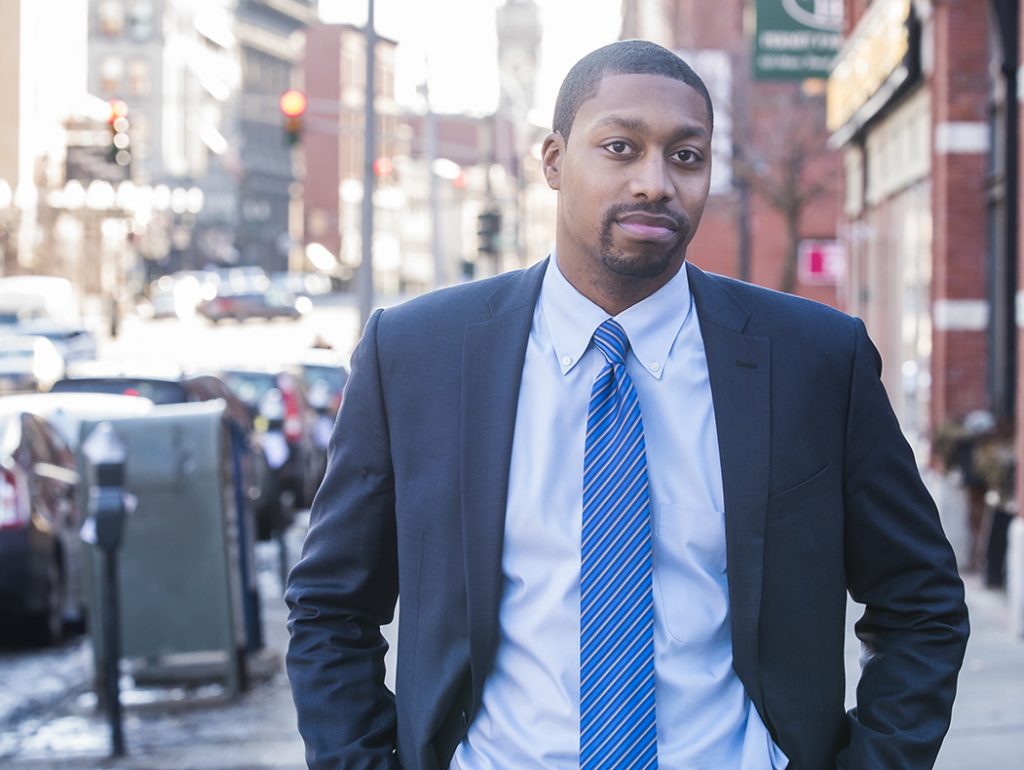 As deputy cultural development officer for the City of Worcester, Che Anderson’s mantra is “Have an impact; do cool things” — words that have guided his personal and professional journey to become a more civic-minded public employee.

Concerned that a traditional MPA wouldn’t give him the right skills, Anderson was looking for a different kind of master’s program to give him the experience he needed to advance his career in public service. A colleague went to an open house for the master of public administration senior leadership (MPA-SL) program offered by Clark’s School of Professional Studies (SPS), and his impressions of the program piqued Anderson’s interest.

Anderson joined the program’s inaugural class in 2019. “Clark is opening a multitude of doors for me — it’s just a question of which one is the right one to walk through,” he says.

After earning a political science degree from the College of the Holy Cross, Anderson worked for the Massachusetts College of Pharmacy and Health Sciences while offering his time and talent to local nonprofits and political campaigns. These experiences pivoted his career trajectory toward an interest in government and public policy. He began working for the city of Worcester in 2014.

Anderson focuses on public art and events initiatives, monuments, and memorials on behalf of the city. His goal is to elevate the perception of the arts to enhance cultural amenities and opportunities. By using the arts as a tool to build bridges within communities, he hopes to stimulate the local economy through job development, artist live-work space, tourism, and hospitality.

He enjoys his work, he says — and the impact he is able to have on his community.  He has been working with the Worcester Together initiative to make sure the needs of the Worcester community are met during the current public health crisis.

Launched by the Greater Worcester Community Foundation and the United Way of Central Massachusetts, in collaboration with the City of Worcester, Worcester Together deploys grants and other resources to organizations throughout Worcester County to address the impact of COVID-19.

Anderson describes the initiative in a video he submitted to #ClarkTogether.

The real-world applications of the MPA-SL program make him more effective at his job, Anderson says. One of the biggest draws was the opportunity to learn from the experience of his professors and classmates.

“I knew I would have people around me with a wide array of experiences that would push me to think differently, think clearly, think better. I really appreciated that aspect of it.”

The program is definitely not a “cookie-cutter” MPA, and the students have input into its makeup, he adds. Anderson appreciates the flexibility of the schedule, which allows him to get the most out of the program and do deep case study dives, while still being realistic about his time limitations.

Another unique strength of the program is the depth of experience his fellow classmates bring. “This program is all about relationship-building, establishing yourself, and developing those around you. How many other times can you sit in a room and realize that this person is the mayor’s chief of staff, that person is the chief of staff for one of the longest-tenured senators in Mass., and this person works at a nonprofit and brings human resources experience. I have access to a pretty dynamic core,” he says.

Students are able to develop personal professional networks and resources, but also can bring their own experiential wealth to share with classmates and faculty. Anderson says that this perspective is incredibly important to public service professionals — as are the weekly discussion posts that allow him and his classmates to have spirited discussions around real-world issues they face throughout their careers in public administration.

The executive coaching and media training components of the program have been beneficial as well. “It was surprising that my coach’s advice was to take time during the day to do nothing, since my job is so fast-moving and I’m always in meetings, but it made sense and I really appreciated the advice,” he says.

During the program’s initial residency session, Anderson learned that Clark has a campus in Llodz, Poland. In one of those serendipitous “it’s a small world” moments, Anderson told John LaBrie, dean of SPS and associate provost for professional education, that he was familiar with Llodz because of a mural artist who works in the city — and LaBrie showed him photos of that artist’s work that he had taken on a recent visit to Clark’s campus there.

“Llodz has some of the best large-scale mural artists in the world. The Polish duo ETAM-CRU designed one of my favorite murals in the U.S. — in Richmond, Virginia — and I would love to discuss with city officials how Llodz, as a postindustrial city, has leveraged public art, much like Worcester has done,” Anderson says.

In 2016, Anderson created Pow! Wow! Worcester, an international arts and mural festival that has given Worcester New England’s largest street art collection. He worked to make the artist roster as diverse as possible by bringing in artists from around the world and had tried to forge a connection with three Polish artists, including the one whose artwork LaBrie was showing him.

Anderson had planned to give several guest lectures in Llodz and meet with the city’s president in an effort to create a “sister city” program between it and Worcester — both have similar industrial backgrounds — but the trip has been put on hold indefinitely due to the current COVID-19 pandemic.

Anderson had long thought of becoming an international lawyer and had dreams of working in The Hague. Since he started the MPA-SL program, he has thought that perhaps becoming city manager, or even mayor, might be a door he could walk through.

“That would make my mother proud,” he says.

The MPA-SL program is currently accepting applicants for fall 2020. Contact mpa_sl@clarku.edu for details.