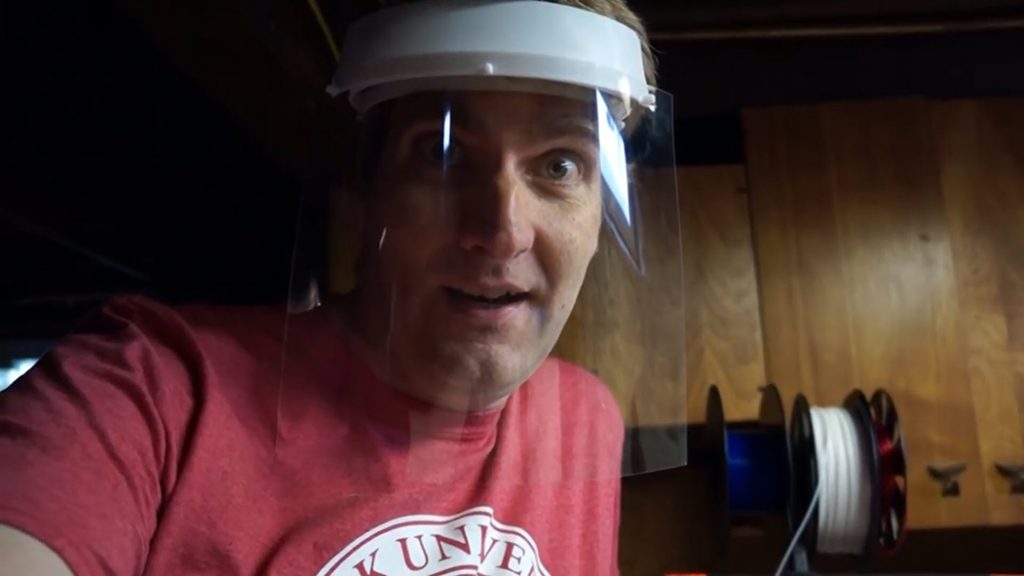 There are countless cases of the human spirit shining through around the globe as people band together to combat COVID-19. For Clark biology Professor  Nathan Ahlgren, those efforts also involve a little science and engineering.

Ahlgren has been 3D-printing face shields for frontline medical workers from his home. As a scientist who studies viruses as part of his research in marine microbial ecology, Ahlgren became interested in the pandemic from an academic standpoint early on. “It really got me into the science and what’s coming ahead,” he says. “People, for a long time, had been talking about flattening the curve and that there would be this surge in need for beds and personal protective equipment.”

After reading about others 3D-printing PPE for health care workers, Ahlgren became interested in what was happening locally. He did some research and discovered the Worcester Face Shield project, a partnership of makers ramping up production to create face shields to protect local providers against infection. Based at Worcester makerspace Technocopia and led by Clark alumna Amanda Barker, M.S. ’11, the project aims to create 6,000 face shields using both fabricated and 3D-printed designs.

“I saw what they were doing and then I realized we have this 3D printer at Clark that I’d been using here and there,” Ahlgren says. “With the shutdown, it was basically sitting idle on campus, so I checked in with other people who use it to find out whether I could bring it home to print some PPE.”

With his colleagues’ blessing, Ahlgren set up the printer in his basement and created face shields nonstop for more than a week. To date, he’s made 85 shields, with an average of 10 per day.

“As long as they say they’re getting requests, I’ll keep printing,” he says.

Ahlgren previously used the printer to create 3D models of viruses, which he incorporated into his biology class, Viruses: Friends or Foes. Now, he’s creating face shields using a design from the National Institutes of Health, which is available for anyone to download from the organization’s website.

The design file is loaded onto the 3D printer, which uses a spool of filament to melt layers of plastic in a “slicing” process. Eventually, those thin layers build up to create a 3D design. The process typically takes about four hours per face shield, but Ahlgren has managed to cut that time in half by adjusting the slicing parameters. He can create about 50 face shields per week.

“When I saw the reality that there’s a need that isn’t being met, I realized this was a small way I can help,” he says. “It just seemed like a no-brainer to put this 3D printer to use.”

Ahlgren also has been researching the virus to gain more insight into what might happen in the coming months. Because so many of his friends had questions about the pandemic, he set up a Zoom call about a month ago to provide them with some answers on immunity, the potential length of the pandemic, and measures they can take to best protect themselves from infection.

“It was one of those things where I have some knowledge of viruses,” Ahlgren says. “I’m not an expert on viruses that infect humans, but having that baseline knowledge of biology and some viruses helped me digest the science that was coming out and pass that on to others.”

Ahlgren is also working with Assistant Professor Hamidreza Ahady Dolatsara in the School of Management and Biology Professor Deborah Robertson to put together a grant proposal to create a tool that will help people assess whether the information they’re reading online about the pandemic is true.

The idea is still in its early stages, but Ahlgren envisions a plugin or a web application that would give a probability of whether the content is accurate.

To date, the Worcester Face Shield Project has delivered 1,200 face shields to area hospitals and nursing facilities, including UMass Memorial and St. Vincent, the Edward M. Kennedy Community Health Center in Milford, Vital EMS, and Salmon Health Care, which has turned many of its elder care facilities into COVID-19 units.

“Technocopia has been really helpful,” Ahlgren says. “I wanted to find a way to help and I saw what they were doing. They’ve been a good hub to coordinate all the materials and get them to the people who need it.”