EMT Ethan Lutz ’21 works at the epicenter of COVID-19 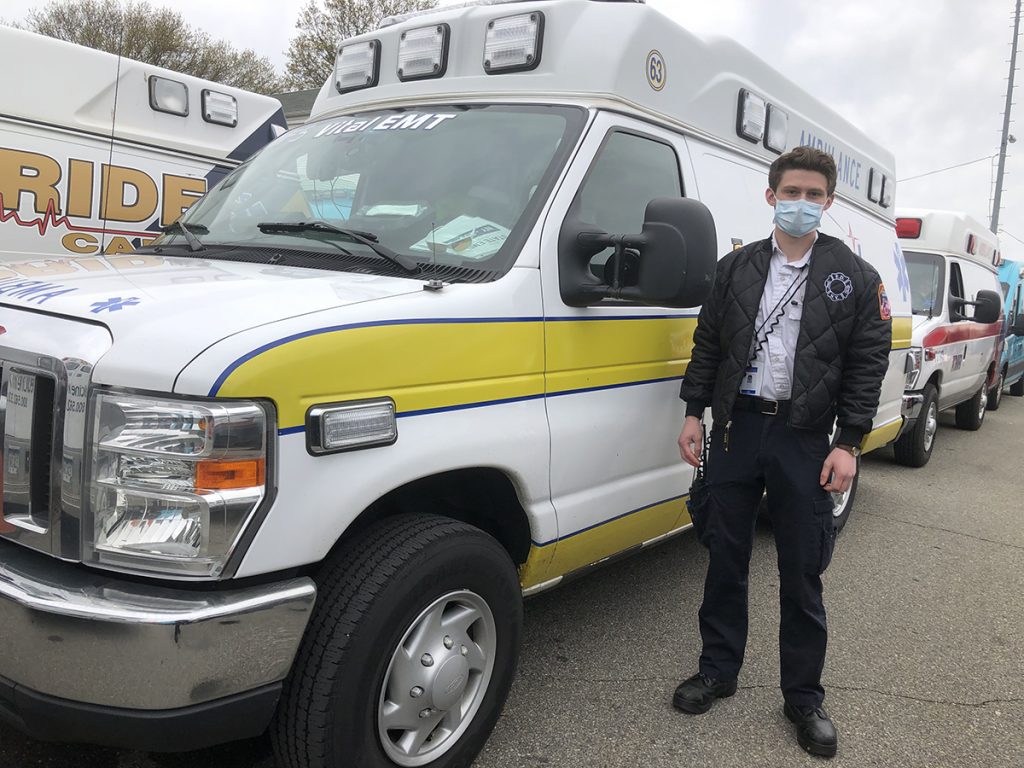 Ethan Lutz ’21 was working a 16-hour shift as an EMT in New York City when his ambulance was dispatched to a call for a man who had collapsed outside his home and gone into cardiac arrest. With the man’s family gathered around, Lutz and his partner began performing CPR.

Alternating chest compressions and ventilations, they eventually brought his pulse back.

“Most of the time when you’re doing CPR you’re not expecting that to happen,” Lutz says. “To be able to successfully use the training we’re given to pull that off was a really nice thing.”

Lutz is spending three weeks working as an EMT with Vital EMS under a Federal Emergency Management Agency (FEMA) contract in western Queens — one of the communities hit hardest in the nation by COVID-19. The rising Clark senior was deployed alongside medical workers from across the country to provide additional support in the pandemic’s epicenter.

The cardiac arrest call was among the most significant events of Lutz’s deployment. Although he is unsure whether the man was infected with COVID-19, he says the pandemic has led to a substantial uptick in heart attacks across the city.

“This has been a learning opportunity,” he says. “You deal with a lot more serious calls.”

Lutz, who’s majoring in political science with a biochemistry and molecular biology minor, is on the pre-med track at Clark. He began working as an EMT with Worcester-based Vital EMS three years ago. When Vital’s parent company, Global Medical Response, began deploying crews and ambulances to New York under a FEMA contract, he regarded it as a once-in-a-lifetime chance to make a difference.

Lutz arrived in the city in mid-April and was initially assigned to interfacility transport, taking patients from area hospitals to the Javits Center — a large convention center in Manhattan that has been transformed into a pop-up hospital for coronavirus cases.

“I really enjoyed that part of my deployment because very few people are allowed into those types of facilities,” he says. “It also gave me a good perspective on what emergency medicine in the most direct sense is — when you’re responding to a public health crisis of this nature, it’s important how you treat all those patients.”

After spending several days suiting up in full personal protective gear and transporting COVID-19 patients, Lutz was reassigned to western Queens, where he’s been responding to 911 calls. He’s helped resuscitate an opioid overdose victim with Narcan and responded to a domestic violence call.

“You hear about the rates of domestic violence increasing, but to actually see a human being with broken fingers due to a domestic violence situation made it far more real,” he says. “That call was a reminder that all these things are still going on, even if the world has stopped because of the pandemic.”

Lutz has spent the past three years studying science through his biology courses, but he says it was his political science classes, combined with his first-hand experience working with FEMA, that has given him a human perspective on the crisis.

In Lutz’s opinion, it quickly became apparent that minority groups are being disproportionately affected by the pandemic. He says people of color in low-income neighborhoods have been hit especially hard because many have preexisting conditions like heart disease and diabetes that predispose them to some of the harshest effects of COVID-19.

“It goes back to sociological factors, like the fact that many minority communities are located near polluted Superfund sites and may not have as much money for healthy food. They often also work in the service industry, which exposes them to the public and increases their risk of contracting the virus,” he says. “Although you can treat the cause of the coronavirus, to really get to the root of the problem it helps to have that knowledge of political and sociological factors.”

In addition to his EMT work, Lutz is also in the process of launching a small business. The pandemic led him to become interested in the antiviral and antibacterial properties of copper, which has been proven to kill coronaviruses faster than most other surfaces. He recently filed patent and trademark information for a PPE storage bag that is lined with an 88 percent copper polyester fabric.

Medical workers typically store their gear in paper bags, which can lead to the transfer of bacteria and virus particles, Lutz notes. “If you put it into the copper polyester bag, it is a sterile environment that lets you reuse masks,” he says.

Lutz has been gauging interest among his colleagues and plans to pursue the idea further once he returns to Worcester.

As for his own personal safety, Lutz isn’t worried. He’s been supplied with PPE and says there has never been a moment when he wasn’t adequately cared for. The show of support from the public has also been astounding, he adds.

“The people of New York have been spectacular. There’s the 7 o’clock claps every night, so if you’re out, you’ll hear pots and pans going and everybody clapping,” he says. “They’re very thankful for all the people who have come to help out.”