Back Alley Clothing is perfect fit for Clark entrepreneur 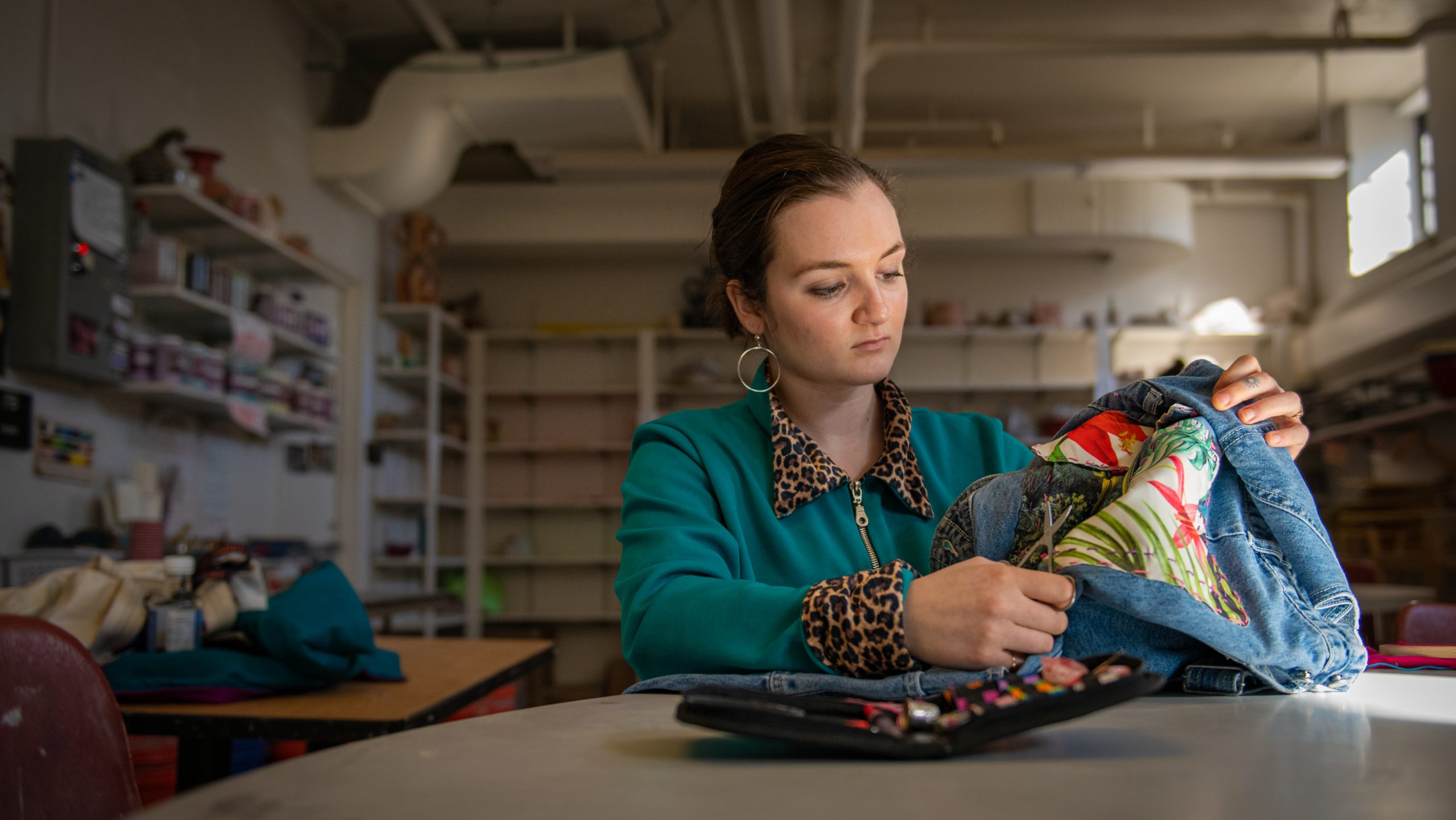 When Alli Jutras ’19 came to Clark University, she knew she wanted to study the arts. But what she didn’t know was that upon graduation, she would leave the University as a business owner.

During her senior year, the Studio Art and Media, Culture and the Arts double-major founded Back Alley Clothing — a pop-up store and online shop that specializes in upcycled and vintage garments. She used seed money from the Ureka Challenge to turn the business into a successful start-up that runs events throughout the Worcester area.

“It allowed me to start the business,” she says of the grant, which is awarded to young Clark entrepreneurs to help them put their business ideas into action. “I’d always loved thrifting, but doing it for other people was an interesting new avenue.”

Over the summer, Jutras focused on booking pop-up events throughout the city, and by fall, the venture had taken off. Today, she sells clothing through various pop-ups and on Instagram, and is in the process of building a web store. Back Alley Clothing also operates as a collective, with Jutras earning a commission by selling goods for different artists.

In addition to buying clothing at thrift shops and through consignment, Jutras “upcycles” pieces by adding funky embroidery, fabric embellishments or painted designs – turning plain garments into works of art. She does some of that work at Technocopia, a nonprofit community makerspace in downtown Worcester.

“It’s basically taking something old and making it new, and in this day and age, I’m passionate about being zero-waste and being environmentally friendly,” she says.

Though she’s always had an entrepreneurial spirit, Jutras had never launched a business before. At Clark, she took business classes and worked with the Innovation & Entrepreneurship Program to turn her plan into a reality.

“This really set me up for everything I’ve always wanted to do by blending all my interests,” Jutras says.

I&E Program manager Teresa Quinn supported Jutras and her classmates as they built out their business plans.

“She believes in everyone from the start and understands their vision,” Jutras says. “I can always go to her if I have a question or if I need suggestions about anything.”

The annual Ureka Challenge awards $100 of seed money to student entrepreneurs and offers help with business development. The students then make a crowdfunding video, similar to those one might find on Indiegogo and Kickstarter, to promote their venture to the Clark community.

Videos for the 2020 ventures went live in early February and the campus community voted with “Ureka Bucks” to name the People’s Choice award. Santander Bank also gave the Ureka Committee additional funding for larger awards, given out following final presentations to alumni and faculty judges. Back Alley Clothing was voted first runner-up, taking home a $2,000 prize.

Although she recently landed a full-time marketing job, Jutras plans to keep running Back Alley Clothing as a side project. She has access to the Clark Collective space on Main Street and uses it to store inventory, network with other business owners, and sell clothing at pop-up events. She also collaborates regularly with other student-run ventures.

“It is important that we meet our entrepreneurs where they are, opposed to talking a big game about things that just don’t apply to their venture at this stage,” she said. “Our entrepreneurship classes very much follow that mindset. Classes help students start, implement, market, grow, and develop a venture they want, not what we want.”

Jutras had originally planned to move to Colorado after college for its creative scene, but decided to stay in the city after working at the Worcester PopUp, which gives local artists and creative entrepreneurs storefront space for exhibitions, musical performances, and other events. Working there opened her eyes to the city’s strong arts scene, and provided her with an affordable place to host pop-up sales.

Today, Jutras also holds pop-ups at trendy spots throughout the city, including Bedlam Book Café in Crompton Place, StART at the Station, the Muse Kitchen & Bar, and the Sprinkler Factory.

“I feel like there’s an underground scene here,” she says. “I also think Worcester has this really nice environment. The artists and the creative people in this city have done a lot to make it their own.”