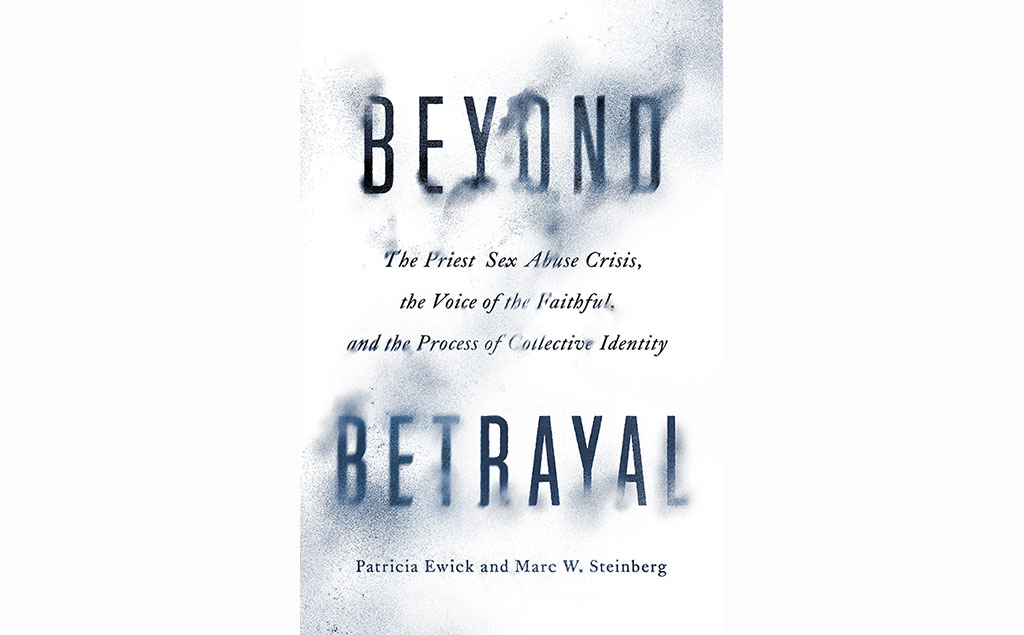 The Catholic Church was rocked to its core in 2002 when the Boston Globe began documenting decades of sexual misconduct by priests — and the Boston Archdiocese’s systematic efforts to cover up the behavior. In her new book, Clark University Sociology Professor Patricia Ewick explores the scandal and the response of some Catholics who vowed to keep their faith while pushing for change.

“Beyond Betrayal: The Priest Sex Abuse Crisis, the Voice of the Faithful, and the Process of Collective Identity” (University of Chicago Press, 2019), co-authored with the late Marc W. Steinberg, charts a nationwide identity shift through the story of one chapter of Voice of the Faithful (VOTF), an organization founded in the scandal’s aftermath to help survivors of abuse, support priests who were either innocent or took risky public stands against the wrongdoers, and to pursue a broad set of structural changes in the church.

Ewick and Steinberg followed one of the longest-lived and most active chapters of VOTF, and produced an ethnographic portrait of the ways this group of Catholics reimagined themselves within the Catholic Church, while also forging new ideas of faith in the wake of institutional mistrust.

“VOTF’s original purpose to ‘change the Church’ was altered in its pursuit,” the authors write in their conclusion.  “To trust when there are good reasons not to, to stay committed when there are abundant reasons to leave, to have faith in the midst of uncertainty may in fact be the key accomplishments of Voice of the Faithful. Paradoxically, for many of the VOTF activists we met, the sexual abuse scandal and its aftermath strengthened their faith, intensified their Catholic identity, and expanded the scope of their participation within the Church.”

Ann Mische, associate professor of sociology and peace studies at the University of Notre Dame, calls it “a moving, provocative, and important book.”

“It’s not that often that you emerge from reading an academic book feeling personally moved, intellectually challenged, politically excited, yet also wary and a little sad. ‘Beyond Betrayal’ is a tight, well-argued book that packs a theoretical wallop alongside vivid case material from an intensive, multiyear study of a local organization engaging an issue of urgent social concern,” Mische wrote. “Ewick and Steinberg challenge us to rethink our understanding of collective identity formation within social movements, while providing us with an intimate close-hand look at the reflexivity and cultural work involved in responding to betrayal and moral shock.”

Patricia Ewick has been at Clark since 1990 and is affiliated with Women’s and Gender Studies and the concentration in Law and Society. She has published several books and articles in various research journals. Her primary research within Clark focuses on deviance, law, and social control. Ewick earned her bachelor’s degree at Tufts University and her doctorate from Yale University.

Marc W. Steinberg was the Sydenham C. Parsons Professor of Sociology at Smith College, and author of “England’s Great Transformation,” also published by the University of Chicago Press.

VOTF began with a small group of parishioners at a church in Wellesley, Massachusetts, and less than a year after its founding, grew to 30,000 members worldwide; it continues to be a voice for its thousands of members.