Costume design plays an essential role in theater, anchoring characters in time and place, and even revealing subtle clues about their personalities. For Julie Reed ’20, it’s also proven to be an invaluable part of her Clark career.

When she arrived on campus as a first-year student, Reed — who had done wig design in high school — was quickly recruited to help with Clark Musical Theatre’s production of “The Little Mermaid.” The experience was so fulfilling that she has returned for nearly every show since.

“The beauty of costume design is you can pretty much make it whatever you want, and as long as you’re staying true to the story, you can’t really be wrong,” she says.

A political science major who is planning a career in law, Reed found a second home in the Visual and Performing Arts Department’s Theatre Arts Program. She has served as lead designer for several Clark Musical Theatre productions, bringing characters to life through different fabrics and textures. She also works in the V&PA costume shop, helping run wardrobe for department shows.

We caught up with Reed to learn more about her Clark experience. 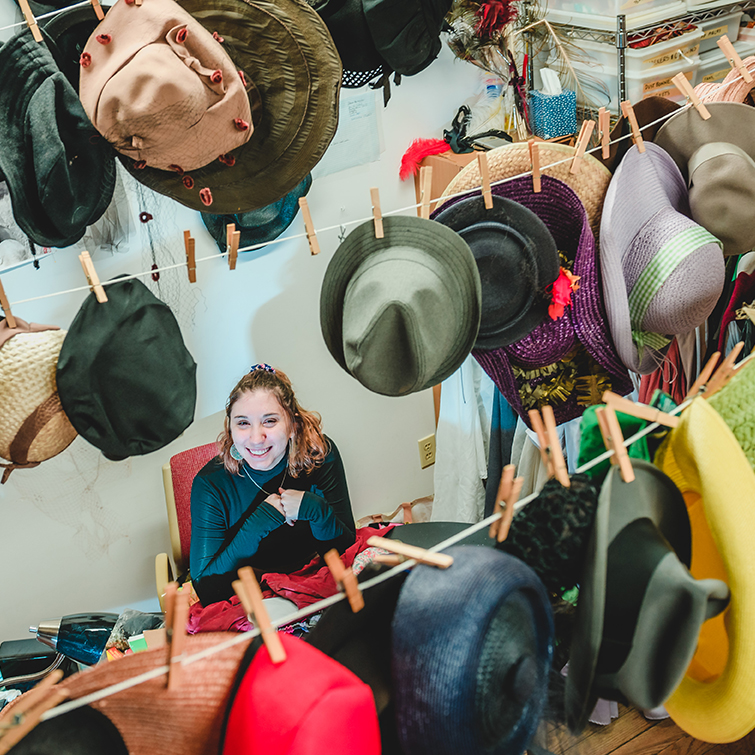 How did you first get involved with costume design?

When I was a senior in high school, my best friend was a costume designer. A week before a show, the person who was supposed to design all the wigs bailed. She knew I could do hair because I had spent all of high school doing prom hair for friends, so she said, “I know this is super last-minute, but we need your help.” I just kind of fell into it.

I’ve pretty much done every show since then.

You also work in the University’s costume shop. What has that experience been like?

I work as a shop assistant under Jessie Darrell Jarbadan, the Theatre Arts Program’s costume designer. Any time the department puts on a show, I work as an assistant designer, helping run wardrobe backstage. I help with quick changes, fixing any tears, and supporting Jessie in whatever capacity she needs.

It sounds like you also found a mentor in the process.

Jessie is one of the most empowering women I’ve ever met in my life. Her whole mindset is you can do anything you put your mind to. I just love her mentality and love what she believes in and what her values are. She inspires me.

How much creative freedom do you have when designing costumes?

When I was designing for Clark Musical Theatre, I had a lot of say in the look we wanted. I worked with the director before auditions to find out what their vision for the show was and how I could best enhance it. After auditions, we sat down and discussed it further. Last semester, the director for “The Wedding Singer” asked me to create a Pinterest board of what I thought the vibe of each character would be.

Sometimes when you’re designing, you have to say, “I really want this but I don’t want to put the actor in an uncomfortable position, so I’m going to change it.” As the costume designer, you are typically seen as an ally to the actor and one of the most important aspects of a show is making sure they feel comfortable.

When you work as an assistant, you’re more focused on helping bring the designer’s vision to life. Ultimately, you learn that costume design is never just one person’s decision.

What has been the most fulfilling part of your experience so far?

I think back to the first day of “The Wedding Singer.” I was backstage for a quick change — one of the main performers put on a purple floral dress with a little white sweater. This was for the scene when she’s beginning to realize she’s in love with another guy and wants to be with him, but doesn’t know how to do that. It’s such a sad song, but so sweet. This is where she’s understanding who she is, and clothes needed to reflect how she’s feeling.

I remember changing her and then standing in the wing. The spotlight hit her and I burst into tears. It looked so good; the character just came to life. All the work I put in and all the frustration I felt to get to this moment didn’t matter, because I made that and it’s onstage.

You’re a political science major, but you’ve found a close-knit community in the theatre. What has that journey been like for you?

The theatre program has been one of the most welcoming spaces I’ve ever found. I was lucky to quickly find this community because I’ve been friends with these people since my first year. I’ll be walking through the library and hear my name from eight different people. It really has made Clark feel a lot more like home. It’s the cliché of “theater is family,” but Clark does a really good job of making us all feel like no matter what, we have each other.

How do you hope to put the skills you’ve learned at Clark to use after graduation?

Costume design has taught me so much about time management and delegating. It’s been super helpful at Clark, and, hopefully, will be once I go to law school. What’s also great about costume design is that it’s a skill I can use if I’m needed to run a wardrobe someday. I know can hold my own.