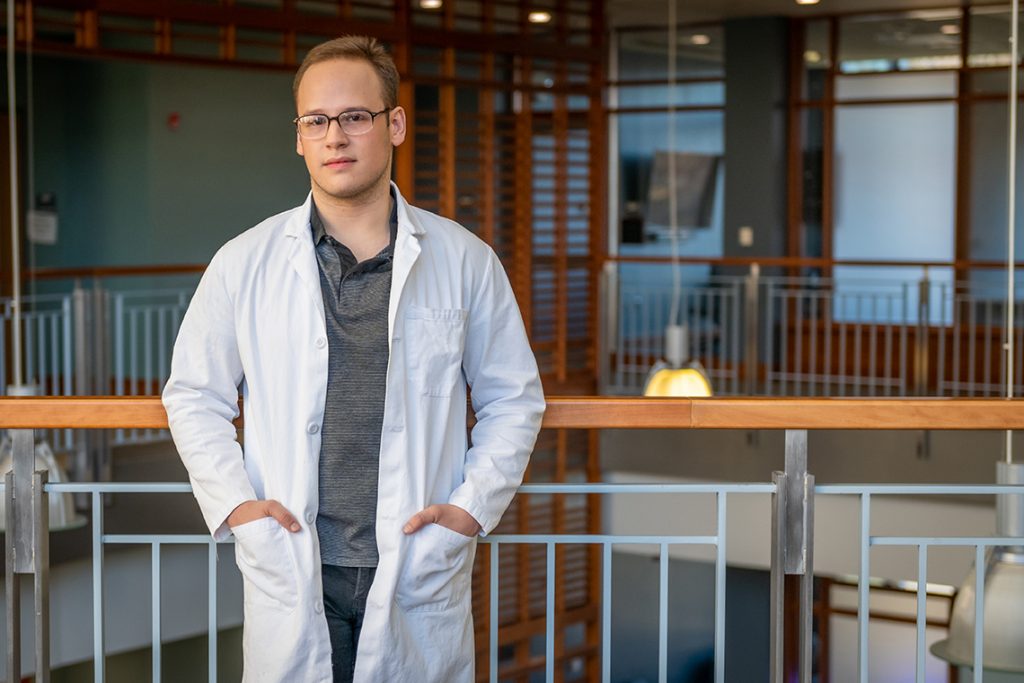 “Is my baby healthy?”

It’s often the first question an anxious parent asks when a child is born. Usually the answer is yes, but perhaps it could be qualified with “so far.” Conditions that are undetected at birth might inhibit the infant’s cognitive abilities as they mature.

One such example is Fragile X Syndrome, symptoms of which are not usually detected until at least age 1. The result of a mutation in the FMR1 gene carried on the X chromosome, Fragile X Syndrome disrupts communication between nerve cells, or neurons. Considered the most common cause of inherited intellectual disability, Fragile X Syndrome is implicated in autism and ADHD, among other disorders.

Lucas Brandao ’20, a biology and psychology double major at Clark University, is investigating Fragile X Syndrome as part of a research team led by Dr. Elizabeth Jonas, professor of internal medicine and neuroscience at Yale School of Medicine.

Brandao met Jonas in summer 2019 when he interned in her lab at the Marine Biological Laboratory at Woods Hole, Mass., as part of a National Science Foundation Research Experience for Undergraduates. His research focused on Fragile X Syndrome, and he’s since been traveling to Jonas’ lab to continue studying Fragile X Syndrome in mice.

Brandao uses a confocal laser-scanning microscope to compare the neurons of mice with normal FMRI genes to the neurons of mice with Fragile X versions. The latter have been treated with the drug dexpramipexole, which at one time was investigated for use with ALS patients. Brandao says the goal of using dexpramipexole is to normalize the neurons’ metabolism and repair their dendritic spines, which help transmit electrical signals to a neuron’s cell body.

His research interests aren’t limited to biology. Brandao spent his junior year collaborating with fellow psychology major Sarah Reinbrecht ’21 and developmental psychology Ph.D. student Amanda Faherty. Together, they investigated the role of parent-child relationships in identity development during the emerging-adulthood life stage (generally, from the late teens to the late twenties).

“Luckily, our study reached statistical significance,” he says. “We’re currently in the process of writing our paper so we can hopefully submit it for publication in an academic journal.

“Clark has challenged me to push myself in a way that I didn’t think I could. I have learned that a good scientist is always thinking, generating new ideas, formulating new questions, seeking answers, making observations, and making meaning from those observations.”

After he graduates from Clark, Brandao plans to enter medical school, but he’s keeping his options open.

“Although I never considered getting a Ph.D., I have found that I am good at research and, ultimately, it is research that helps advance science, medicine, and healthcare,” he says. “One day, I hope to tie together my love for healthcare with my love for research.”

“It’s thanks to all of these people that I am able to succeed as a student,” he says. “Clark has helped to shape me into someone who understands a lot about how the world and people work.”