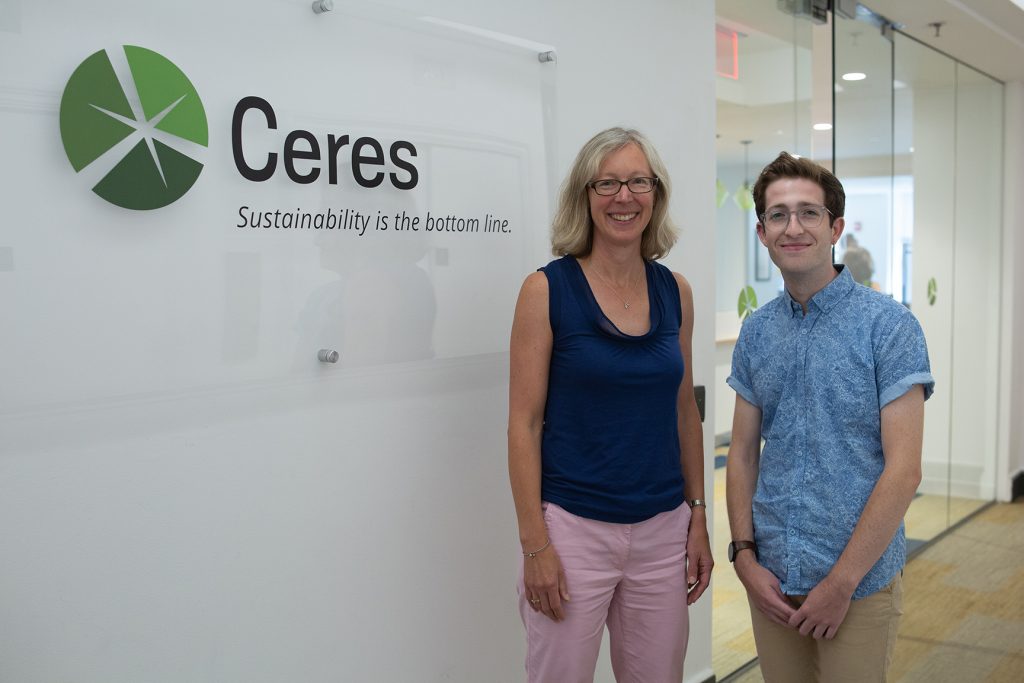 Last year, Isaac Stone ’19 saw the opportunity for a summer internship at a Boston environmental-advocacy group and he took it.

But he had some help.

Through ClarkCONNECT, Stone had found a mentor in Karen Patterson Greene ’92, director of planning and evaluation at Ceres, a Boston-based nonprofit organization dedicated to finding economic solutions to the world’s biggest sustainability challenges. Through a series of exchanges, the student and alumna discovered commonalities, including a background as student-athletes (Greene played field hockey, Stone ran cross country) and a passion for environmental issues.

When a colleague was looking to hire an intern, Greene recommended Stone for the job.

“We get so many applications for our internships, and it’s really hard for the hiring managers to sift through it all,” Greene says. “With Isaac connecting with me directly, I was able to [relay] his interest directly to one of my colleagues. Reaching out to someone personally helps bring your application to the top.”

Stone landed the position at Ceres and spent his summer working on the Investor Network team’s Shareholder Initiative on Climate and Sustainability. There, he compiled a list of companies that could have a profound impact by adopting greenhouse gas reduction targets.

“I’ve been doing research surrounding the companies on the S&P 500 list to determine whether or not they’re performing in a positive manner on different environmental initiatives,” he told an interviewer. “Do they have a clean energy initiative, do they have board oversight on climate-related issues, do they purchase carbon offsets?”

An environmental science major with a focus on conservation biology, Stone tailored his academic experience to give him the skills needed to pursue a career in a social science-oriented field. He is now pursuing an accelerated master’s degree in environmental science and policy with a concentration in climate change impacts and adaptation.

Greene, who went on to earn two master’s degrees after graduating from Clark, said her undergraduate education — with its focus on research, hands-on learning, and internship opportunities (she completed three internships as an undergraduate) — prepared her well for a career in the environmental field.

“I have many years of work experience now, but talking to current Clark students reminds me of where it all began, and how the skills I learned at Clark are still applicable,” she says. “It’s been very rewarding to me in that way.”

Stone’s work at Ceres helped solidify his goal of working with stakeholders engaged in the environmental movement, particularly people and organizations most directly affected by climate change.

“I plan to reach out to several alumni who are working in areas I’m interested in exploring,” he says. “I’m hoping these alumni will provide me with insight into the work they do along with tips on finding a job in the environmental field.”

“Once I reached out to Karen, she was more than willing to talk with me about her career path, my career aspirations, and anything else I wanted to know,” he says. “Networking is a task most people do not look forward to, but building connections with alumni is worth it for personal and professional reasons.”