Lizzo’s “Good as Hell” is playing through speakers as students file past eight chairs labeled “VIP Guest” and into Lawrence Norman’s classroom. It’s the first day of the semester, but one thing is already clear — this isn’t going to be any ordinary marketing course. Over the next seven weeks, the Clark University undergraduates will hear from prominent businesspeople, ask real-world questions, and sharpen their public-speaking skills through “Shark Tank”-like presentations.

And at the end of the semester, they may even leave with a job.

A former Adidas executive, Norman ’94, MBA ’95, has returned to Clark University to teach “Marketing to You” — a new class on marketing to young consumers. Throughout his 21-year Adidas career, Norman worked across six countries and moved internationally nine times. But when it came to hiring recent college graduates to help the company reach a younger demographic, he encountered a challenge. 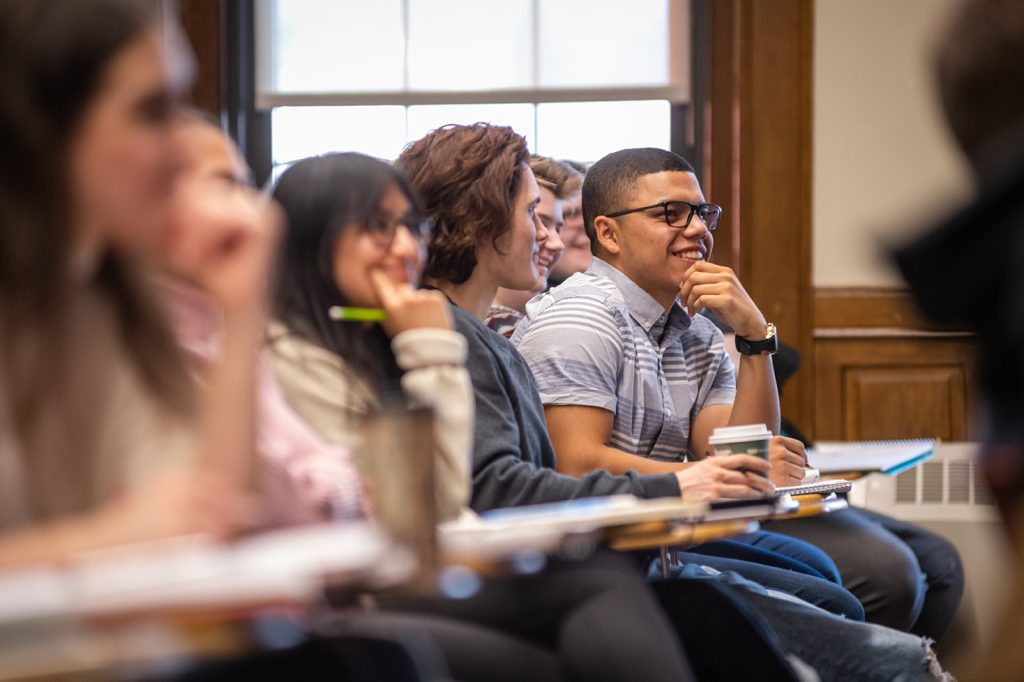 “When I was at Adidas, I realized that when they wanted to hire people to come in and help them reach young people in the 18-to-20 age range, they were bringing these people in and they wouldn’t have the training or experience they needed,” he said. “It was just a long process.”

So Norman decided to take matters into his own hands. He developed the idea for Clark’s new course, which will teach students the fundamentals of marketing to their peers.

We caught up with Norman to learn more.

You’ve described this as a revolutionary course — what can students expect throughout the semester?

There are seven “episodes” instead of classes, and the episodes are done with a beginning monologue to outline what is coming ahead for the day. Then there’s a guest speaker who talks about their real-world experiences via a presentation or a Q&A interview. After that, the students meet the guest speaker and ask questions. After a brief intermission, the students come back and do a project based on the learnings from the morning. They’re split into eight groups of five students per group. These groups have about 30 minutes to work on the project and eventually present back to the class in almost a “Shark Tank”-type of environment.

Your class focuses on marketing to high schoolers and college students. Why is that demographic so important?

That age range controls the most wealth in the United States. Fourteen- to 19-year-old kids control about 18 percent of the wealth in the U.S., and that’s because they influence their parents, as well as their younger brothers and sisters. People also aspire to follow the trends that a 16- or 17-year-old kid is setting — music, fashion, sports, technology. Those teenagers also become brand-loyal. That’s the consumer who is really critical to these big companies.

Let’s talk about guest speakers. Who are some of the big names making an appearance this semester?

One is the CEO and founder of a great company called Wanderu — it’s a top travel app. Her name is Polina Raygorodskaya; she’s amazing and she’s made Forbes’ 30 Under 30 list. For the third episode, the president of the Boston Celtics, Rich Gotham, joined us. The Celtics are one of the best-run organizations in all of sport for many years and Rich has been a key reason.

I’m also going to have other entertaining guests make appearances, like a friend of mine who is a competitive eater. His name is Crazy Legs Conti. He’s been in documentaries; he’s always in the Nathan’s hot dog eating contest every year; he’s been on Letterman, Jimmy Fallon. He’s well known in that circuit — he’s definitely different but very smart.

You were playing professional basketball in Israel when you joined Adidas. How did you get the job?

I met somebody who knew somebody who knew somebody — isn’t this how it always happens? — who was starting Adidas from scratch in Israel. I was fresh out of Clark, I didn’t have a lot of experience, but I had sports experience in basketball, so they hired me to help start the company with three other people. I ended up staying longer than I expected because I was having the time of my life. I became an Israeli citizen and learned the language.

I ended up moving across Europe several times as I took on new roles, and then later to Portland, Oregon, for a variety of different senior-level, sports marketing and communications jobs for basketball. I was eventually offered my dream job — head of global basketball — and later became general manager for Adidas and Reebok for 10 countries. Eventually, I moved back to Boston, where I’m from, to be the vice president of digital for Reebok.

Since then I’ve had a couple of other roles — one involving artificial intelligence in sport, another in cannabis. Now I’m at Clark and may start my own company in the near future.

How did you decide to teach at your alma mater?

Maybe five or six years ago, I first pitched the idea [for this course]. It didn’t work out, so I pitched it to the next dean and it never made it through. Eventually, I pitched it to the current dean, Priscilla Elsass, who was one of my favorite professors in business school. I tweaked the idea a bit and she said, “OK, let’s do the class, but you have to teach it.” I have a lot of passion for the university. I’ve always had a lot of fond feelings and gratitude for what Clark has done for me, so I said, “Let’s do it.”

The class will culminate in a very unique way — and some students may even land a job?

On the seventh and final episode, we’ll be inviting many heads of HR from top companies based out of Boston and Worcester for the students’ final presentation. A lot of these kids are seniors — if they impress one of these heads of HR, maybe they’ll be hired on the spot. I want to give students the opportunity to learn certain skills and tactics that I don’t feel these big companies are able to acquire on day one from new hires. And secondly, I want to give them the opportunity to really have their shot to land a role or an internship during the class or soon after.

What is your vision for how this program will evolve?

It’s starting off as an elective, but I would like to see it become a full-fledged class and maybe even eventually a major. Someday, it would be great if Clark is identified all over the world for this unique major. That’s the goal. The vision for this is in a couple years’ time, Amazon and Adidas will come to Clark and say, “We want to know the kids in this class. Who are the best ones? These are the ones we want to work for us.”

How did your own Clark education prepare you for your career?

The “Challenge Convention. Challenge Our World” slogan is perfect for Clark — a liberal university that’s really inspiring people to be more creative. I came to Clark as someone who was, I hope, a decent presenter, but by the time I left Clark, I honed those skills and became more confident in myself and my ability to inspire and educate a crowd. That became really important as I went on to my first job at Adidas. They specifically called out the fact that I had a Clark MBA. Having that fifth-year education was the final decision-maker for them to hire me.

Do you have any advice for students who are trying to make the most of their time on campus?

Take my class. Seriously though, the way you communicate — how you write, how you bookend stories, how you became a better storyteller, how you build a presentation, how you work on your posture and your eye contact and your voice inflection — is going to be as important as anything you learned at Clark. Students should try to enroll in classes that encourage them to become better presenters.