Clark students dig deep for solutions to the superbug problem

Tiny Earth lab is a hunt for the origins of new antibiotics
By Erin Shull ’19, MBA ’20 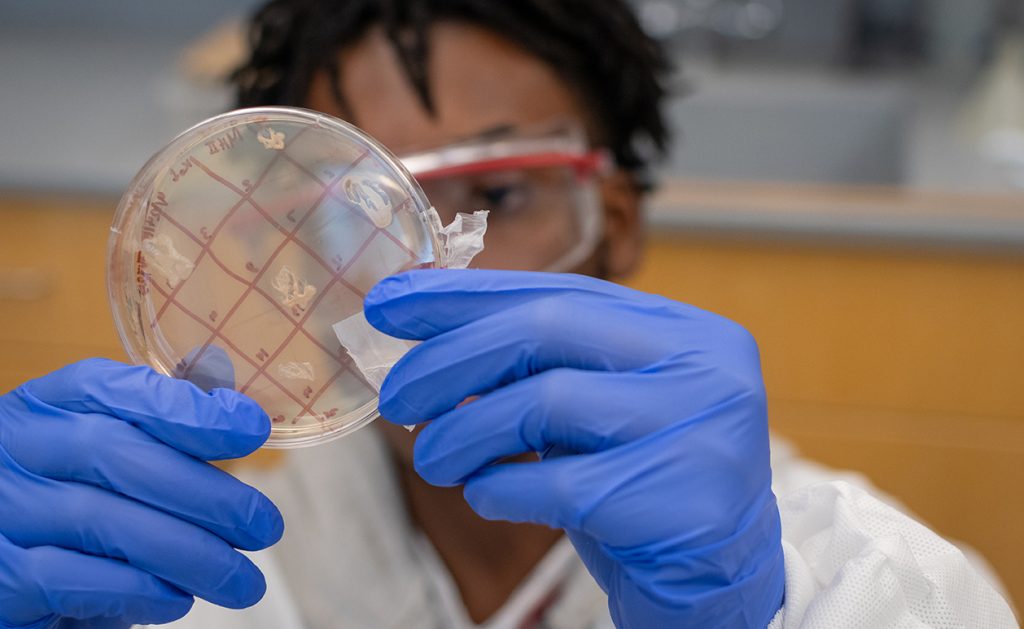 First-year students who enroll next fall in a special Biology 101 lab will be taught to think small in the pursuit of huge results. They will analyze soil samples in search of bacteria that can be used to produce new antibiotics strong enough to combat so-called “superbugs,” which resist most common antibiotics.

Clark is part of a nationwide academic movement called Tiny Earth, which promotes the “student-sourcing” of solutions to a global health threat.

“The goal of the Tiny Earth teaching program is to teach college biology students to think like scientists and to help combat the growing crisis of human pathogens that are becoming resistant to antibiotics more quickly than new antibiotics are developed,” says Professor Elizabeth Bone, who last semester introduced the Tiny Earth platform to first-year students. “Students began the semester by collecting their own soil samples, and spent the semester isolating bacteria from the soil, testing those bacteria for antibiotic production, and conducting experiments using those bacteria.”

Daniel Dalton Williams ’23, a biochemistry and molecular biology major who enrolled in last semester’s lab, said Bone encouraged students to ask questions during any phase of their experiments. “This motivated us to take initiative and taught us that, as a scientist, it is okay to ask for help at any time,” Williams said.

Bone said the sense of camaraderie that developed among the students was a favorite aspect of teaching the lab.

“Even though students worked on their own projects, they were willing to share their experiences and even their bacteria samples,” Bone said. “For example, some students were lucky to isolate several antibiotic-producing bacteria from their soil samples, and they were happy to share those samples with students who were not so lucky.”

Professor Bone also noted her students’ drive to conduct successful experiments and the skills they mastered to do so.

“I had students who were determined to find their own antibiotic-producing bacteria and restarted their experiments from scratch halfway through the semester,” she said. “They were able to speed through the experiments with the experience they had gained. We had some really awesome ‘I did it!’ moments in this lab.”

Labs like Professor Bone’s give students an opportunity to do foundational work in the sciences.

“As a student who intends to pursue a career in the medical field, the lab gave me firsthand experience of what it means to be a lab scientist or researcher,” Williams says. “It also helped me develop conceptual science skills that can be used to interpret other scientific experiments or research in the future.”