Clark’s next president is welcomed in campus celebration 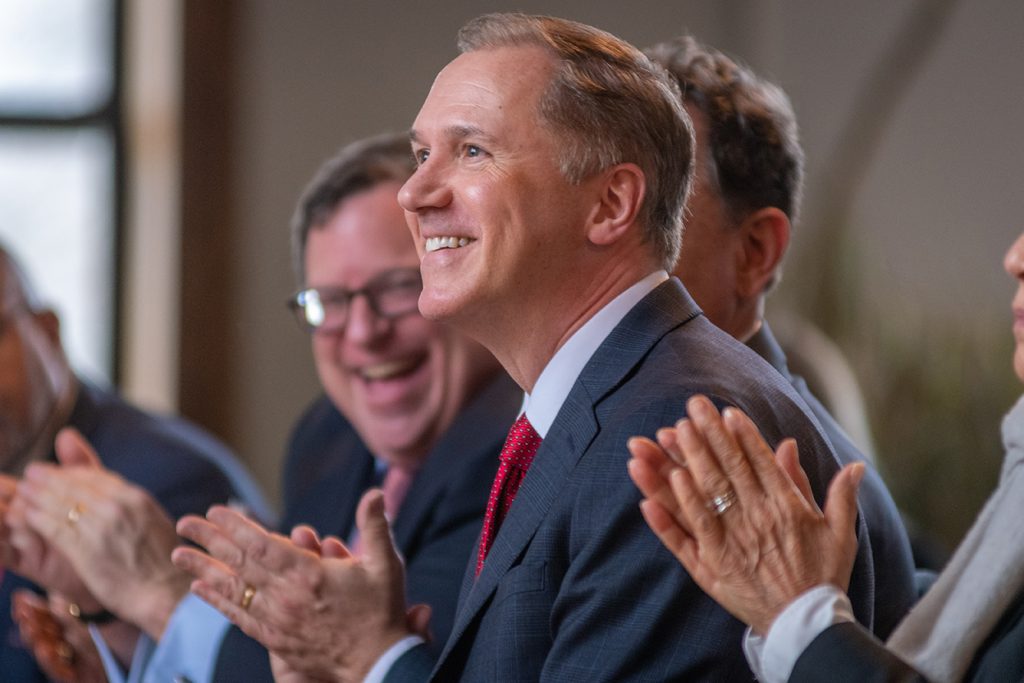 In May 1987, David Fithian left campus as a newly minted Clark University alumnus.

On July 1, 2020, he will return to campus to assume leadership of Clark as the 10th president in the University’s 133-year history.

Fithian was introduced as Clark’s next president at an event that included expressions of deep gratitude, a nod to a special shared history, and a clarion call signaling the bold possibilities that lie ahead for Clark. Students, faculty, Board of Trustees members, and staff crowded into Tilton Hall for the announcement, which was livestreamed into Atwood Hall.

Following a national search, the Clark Board of Trustees unanimously elected Fithian, the executive vice president for the University of Chicago, to succeed David Angel, who will retire in June after serving for 10 years as Clark’s president.

When introducing David Fithian to the Clark audience, Angel cited the tangled history between the University of Chicago and Clark University. More than a century ago, he noted, Chicago President William Rainey Harper lured two eminent department chairs — including a future Nobel Prize winner — and a quarter of the junior faculty away from Clark. “I’m particularly thrilled today that the talent pipeline is being reversed,” Angel said, drawing laughter from the crowd. “It might have taken more than a century to do it, but there’s something nice about welcoming someone of talent and ability back to Clark University.”

Angel said that Fithian will still recognize much about Clark from his student days, including the commitment to providing an exceptional liberal arts education and a prestigious research portfolio at both the undergraduate and graduate levels. But he also expects Fithian will find a stronger institution — one with a clearer sense of mission, more tangible involvement with the Main South neighborhood, a commitment to nurturing a more inclusive and diverse campus community, and a hunger to deepen its impact locally, nationally, and globally.

“Being the president of Clark is a great gig,” he affirmed. “I join with everyone here to thank you for committing your talent, your compassion, your energy, and your ambition for Clark University.”

Fithian thanked the Presidential Search Committee and Board of Trustees for their overwhelming support of his candidacy.

“In exchange for its confidence in me, I pledge to the Board and also to the faculty, staff, students, and alumni that I will work every day to the best of my ability to make our University as broadly excellent, as fully inclusive, as deeply impactful, as fiscally strong, and as greatly admired as it can be,” he said. “I will be true to the values of Clark, faithful to its mission, and respectful of its history, even as we will have to evolve — perhaps more quickly than ever before — to navigate the changing landscape of higher education.”

Fithian praised David Angel for his 32 total years of distinguished service to Clark, noting that Angel arrived as a professor of geography the same year Fithian graduated.

“I have heard much this past fall about the great strength of Clark’s position today that your leadership has secured,” he told Angel. “While it clearly falls to other people on other occasions to recognize and celebrate all you’ve done for Clark, allow me to applaud you today for all I will have to work with and build upon starting July 1.” Attendees joined him in a rousing ovation for the outgoing president.

In his remarks, Fithian said that in today’s higher education environment, Clark faces formidable questions about how the institution will continue investing in undergraduate and graduate education, attract and retain accomplished faculty, and promote a renewed sense of engagement with alumni. He welcomes a collaborative approach to finding the answers and succeeding in ways that build upon Clark’s values.

“While great universities have many things in common, they are not all the same — and don’t need to be,” he said. “Individual universities must embrace their own identities, leverage their own distinctive strengths, and be true to their own cultures and values. As the competitive landscape of higher education grows more so, a university like Clark will prosper precisely because of its distinctive set of characteristics and because of the remarkable people, like all of you, who believe in it.”

Fithian thanked his husband, Michael Rodriguez, for his inspiration and support. He recalled telling Board of Trustees Chair Ross Gillman ’81, “[T]he best thing about hiring me would be that the Clark community would also get Michael. And I know you’ll find very soon that I am right about that.” He also thanked University of Chicago President Robert Zimmer for his mentorship and friendship.

Prior to Angel’s introduction of Fithian, Gillman, who chaired the search committee, thanked the committee members for participating in a rigorous process that produced a candidate pool of “breathtaking quality and depth.”

“As we deliberated together and challenged each other, we had the opportunity to gain insights into the candidates, and into Clark, from different perspectives and experiences, while always remaining true to our agreed-upon goals,” Gillman said. “This process allowed us to select the best president possible. And indeed, we have found that person.”

He lauded Angel for his foundational leadership, and welcomed Fithian, who, he said, arrives with a reputation as “a deep and strategic thinker, with a tremendous capacity to lead and inspire.”

In a rousing presentation prior to Fithian’s, Esther Jones, dean of the faculty and a member of the search committee, observed that “President Angel has led our community with drive and determination, grit and grace, level-headedness, and love,” which has made Clark steady and strong and “allowed us success in our search for the next president, who is also a Clarkie, and who has returned to us with love for his alma mater.”

“Clark,” she said, “is primed and prepared for visionary leadership and transformative change that seizes upon the best of who we are, where we stand, and what we do; and that recognizes the as-yet untapped potential of our collective synergies and ambitions to become a model of excellence, and a leader in higher education.”

Fithian ended the event with an assertion of pride and aspiration for the University he will soon lead.

“I am thrilled and honored to be standing here today having been chosen Clark’s 10th president. Together, inspired and enabled by the tremendous progress of the last ten years — indeed across the entire life of our University — let us carry forward the excellence, the impact, the story, and the possibilities that lift us, because this is — we are — Clark University!”