Donald J. Trump and Hillary Clinton were the first ever male-female major-party candidates competing for the presidency, but as President Trump campaigns for reelection against a Democratic field that includes several women, there is more to learn about what 2016’s votes mean for this year’s balloting than just that personal dynamic.

According to “Trumping Politics as Usual: Masculinity, Misogyny, and the 2016 Elections,” a recently released book by Political Science Professors Robert Boatright and Valerie Sperling, gender debates were critical to how Democrats and Republicans campaigned for the U.S. House and Senate not only because a man and a woman were competing for the nation’s highest office, but also because of how Trump’s rhetoric affected judgments about those debates at every political level. 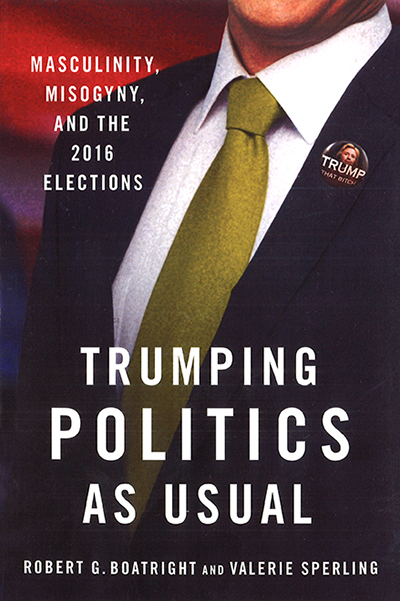 “In many elections,” Professor Sperling said, “candidates frame their appeals in gendered ways — they compete, for instance, over who is more ‘masculine.’ This is the case for male and female candidates alike.”

Professor Boatright added, “In 2016, the stark choice between the first major-party female candidate and a man who exhibited a persistent pattern of misogyny made the use of gender more prominent than in any previous election in the United States.”

“Trumping Politics as Usual” also explores how Trump and other world leaders — including Russian President Vladimir Putin and President of the Philippines, Rodrigo Duterte — use masculinity in their establishment of political authority.

Cindy Simon Rosenthal, presidential professor emerita and director of the Carl Albert Congressional Research and Studies Center at the University of Oklahoma, wrote, “Boatright and Sperling have assembled a richly detailed and highly readable account of the impact of the Trump candidacy and his open misogyny on congressional races in 2016. Their careful analysis offers a myriad of new questions and lessons as the 2020 presidential season approaches.”

Professor Boatright teaches courses on and researches American political behavior, political parties, campaigns and elections, interest groups, political participation, and political theory. He is co-editor of “A Crisis of Civility? Political Discourse and Its Discontents” (Routledge, 2019). His book “Getting Primaried: The Changing Politics of Congressional Primary Challenges” (University of Michigan Press) was named one of “The Best Political Science Books We Read in 2013” by the National Journal. He is the director of research for the National Institute of Civil Discourse.