Clark students use satellite technology to protect the planet’s creatures, starting with the mightiest 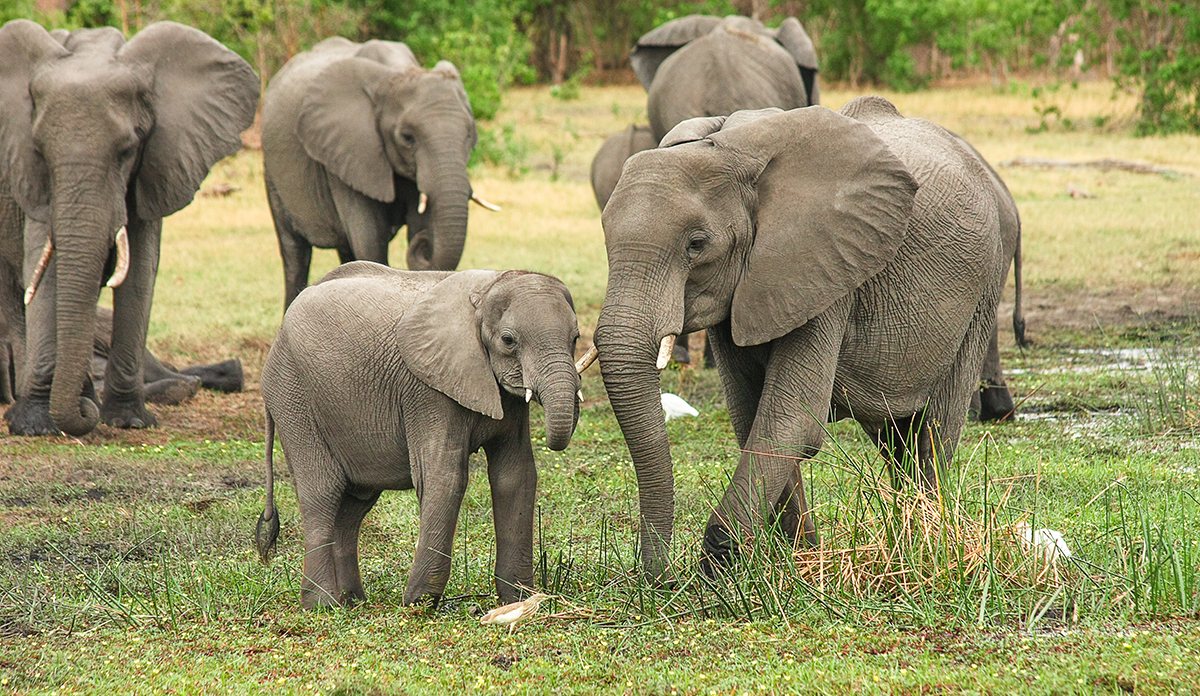 For the African elephant, the numbers are bleak.

An estimated 26 million elephants roamed Africa in 1800. By the turn of the century, Western trophy hunters, fueled by an ivory frenzy and buttressed by colonialism, began training their rifles on the mighty animals. By 1979, the continent’s elephant population had dwindled to 1.3 million.

Organized crime, smuggling rings, and corrupt governments have aided a significant wave of poaching over the past decade. In 2011, law enforcement officials seized an estimated 38.8 tons of illegal ivory — the equivalent of tusks from 4,000 elephants. Today, only 400,000 to 500,000 African elephants remain.

The depressing statistics inspire researchers in the Graduate School of Geography to do battle on behalf of the world’s largest land mammal.

Geography professors John Rogan and Florencia Sangermano, M.A. ’08, Ph.D. ’09, have long empowered student researchers to use high-resolution imagery and other remote-sensing technologies to help protect wildlife, ranging from elephants in Africa to bison in Montana to sea life in Patagonia.

Two years ago, the Wildlife Conservation Society approached the professors with a question: Could remote satellite images be used to count elephants?

“When we went to the WCS and talked to the elephant research group, we said, ‘This is very experimental. We’re not sure we can get anything out of this satellite data,’ ” Rogan recalls. “In desperation, they said, ‘Just try whatever you can.’ That speaks to the dire situation of African elephants.” 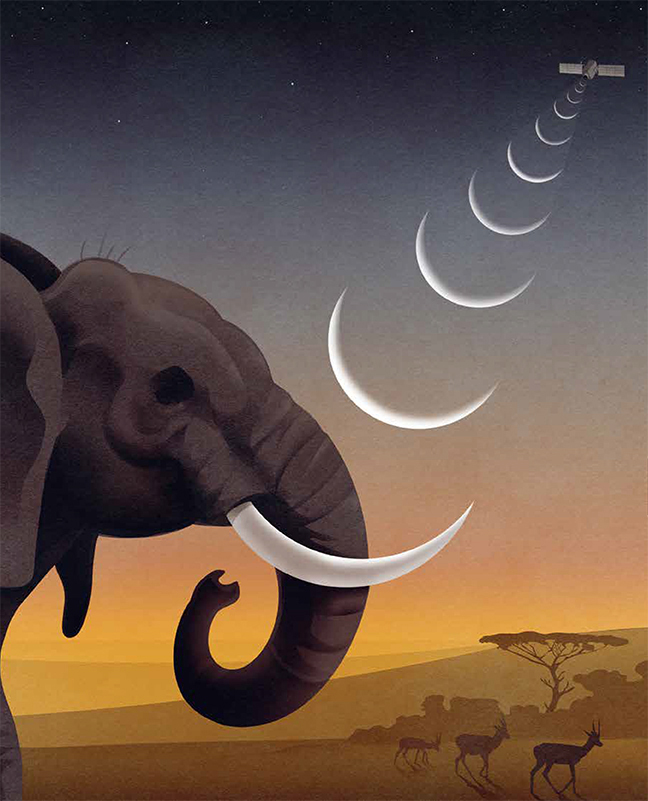 Why count elephants? By tracking herds, conservationists can figure out how to manage and protect the animals. Besides poachers, Africa’s elephants are threatened by the continent’s rapidly growing human population, which is encroaching on corridors that allow wildlife to move freely. Elephants that wander outside of protective corridors or national parks can destroy crops, interfere with livestock, and intimidate villagers, making them targets for retaliation

But aircraft has drawbacks. Low-flying drones, helicopters, and planes scatter wildlife, make governments wary, and encounter poachers. In 2016, poachers in Tanzania shot down a helicopter that swooped down to check out an elephant carcass, killing the pilot.

Counting elephants via satellite would be inconspicuous, and, therefore, ideal, the WCS suggested.

However, it would be no easy task. A camera positioned some 400 miles — the equivalent of 7,000 football fields — above earth is more than a bird’s-eye view. “It’s like looking for a needle in a haystack,” Rogan says.

Students turned to the tools of GIS and data science to classify objects and recognize patterns.

“A lot of this work has come out of the medical field for brain scans that identify an anomaly,” Rogan explains. “The elephant is an anomaly that you want to pick out of millions and millions of potential non-anomalies.”

Still, Song faced a conundrum: discerning whether the dark objects spotted by satellite images were vegetation, patches of soil, or elephants.

To figure it out, she input data provided by the Wildlife Conservation Society, along with the satellite images, into Clark Labs’ TerrSet GIS software. She applied a process called segmentation, where similar pixels are grouped together to better define an image.

Using R and Python programming languages, Song created an algorithm that compared the proportions of the dark objects with those of real elephants. To determine the height of the object, the algorithm took into account its width, the sun’s elevation, the length of the shadow cast, and latitudinal and longitudinal data.

The 3D characteristics created by this meshing of technology, she notes, are particularly useful in picking out elephants — even from 400 miles away in the sky.

Why does the elephant not cross the road?

Tanzania had a specific elephant problem. It wasn’t just that the animals’ population had declined 60 percent between the years 2009 and 2014, to around 43,000, but how they move from place to place was also affecting their numbers.

In 2013, students in Rogan and Sangermano’s Wildlife Conservation GIS Research Seminar examined the potential impacts on elephants of an initiative to expand wheat agriculture north of Tanzania’s Tarangire Park. As creatures of habit, elephants migrated along fixed corridors, some of which were now occupied by wheat farms. Trampling the wheat angered the farmers, who resorted to violence to repel the animals.

Gathering GPS data collected from radio collars affixed to the animals, Clark students conducted research that aided the Wildlife Conservation Society’s collaboration with park officials and local villagers to identify corridors where elephants could travel without disturbing the fields.

The students’ work “helped the government rethink where they were putting in a new road, because the planned road went straight through the corridor for the elephants,” says David Wilkie, director of conservation measures for the WCS. The agreed-upon goal was to find ways to preserve both wheat and elephants.

At the time, the students did not know whether their research would make a difference. It can take months or even years for such research to result in policy changes.

“I had hoped our research would have an impact,” says Christina Geller ’13, M.S./GIS ’14, who took the seminar as an undergraduate and now works as an ecosystem partnerships manager at DigitalGlobe.

“When Dave Wilkie introduced the elephant data to us, he said the WCS wanted to know where elephants were leaving protected parks like Tarangire, and if something — differences in vegetation or lack of water — was driving that behavior,” she recalls. “We focused much of our attention on identifying areas where croplands and road networks already intersected with the movements of the elephants, and it is wonderful to hear our project helped mitigate further human-wildlife conflict.”

Rogan and Sangermano have taught the conservation seminar every spring since 2012. Their students operate as Clark GIS Consulting, providing the Wildlife Conservation Society with research to support its biodiversity projects across the globe, from the grasslands and forests of Asia, Africa, and the Americas to marine habitats in the Arctic.

“Over the last [seven] years, we at the Wildlife Conservation Society have come to this class and posed questions that we don’t have an answer to,” Wilkie told students on one of his many visits to Clark. “And every year, you’ve done an amazing job, developing conservation solutions that our programs have taken back to the field and used.”

Throughout the semester, students provide monthly progress reports to Wilkie and GIS specialist Danielle LaBruna. Each May, they relay their findings to a roomful of Wildlife Conservation Society professionals at the organization’s Bronx Zoo headquarters. Field conservationists from across the world join the conversation via Webex.

Last year’s class helped the WCS with conservation issues in the Arctic’s Northwest Passage and Patagonia’s continental shelf in the southwest Atlantic Ocean.

The Patagonia team focused on illegal fishing of the Argentine shortfin squid in one of the largest fisheries in the world, near Argentina and the Falkland Islands. Fed by currents from warm South American and cold Antarctic waters, this nutrient-rich area in the vast continental shelf produces huge phytoplankton blooms, the basis of the ocean’s food chain, and sustains large populations of elephant seals, Magellanic penguins, albatrosses, whales, and other species.

Wilkie directed students to develop a model to help the Argentine government predict and monitor illegal squid fishing in its exclusive economic zone — the area within 200 miles of the country’s coast — and in marine protected areas.

He also asked the students to map shipping patterns across the continental shelf to determine which ships might be illegally fishing. The Argentine government “is open to moving the shipping lanes for conservation reasons if we can provide this information,” Wilkie noted.

“The Clark University results can definitely help frame the conversation around patrolling for illegal fishing,” LaBruna said. “The students’ work is of interest to our field staff, and provides a platform for further engagement with the Argentine government on how to approach patrolling of existing and future marine protected areas.”

Home on the range

This spring, Clark students turned their attention to identifying land that might support free-ranging bison. They examined a number of factors like parcel size, elevation, and proximity to water sources while also researching precipitation and vegetation conditions. The students determined land ownership (government, tribal, or private), and considered which owners might be more amenable to hosting free-range bison. The WCS already is working closely with the Blackfeet Nation to expand bison herds in Montana.

Like the iconic African elephant, North American bison — significant and symbolic in Native American culture — at one point faced extinction. Due to the Westward Expansion and unregulated hunting, the bison population plummeted from an estimated 30 million to only 325 buffalo at the end of the 19th century.

But for now, the bison’s future seems more stable than that of the African elephant.

Since founding the American Bison Society in 1905, the Wildlife Conservation Society has been involved in efforts to save North America’s largest land animal. About 500,000 bison roam the American Plains, although most of them are bred by private ranchers for meat. Only 20,000 live on conservation lands; of those, 15,000 are free-ranging.

The Clark students’ research identified nearly 21,000 square miles of potentially suitable, year-round habitat for free-ranging bison, which could expand to 48,000 square miles in the summer. That’s more than a third of Montana.

In central Montana, the students identified large parcels around the American Prairie Reserve where highly suitable rangelands could be linked together via private, tribal, and federal partnerships.

“This is fantastic. I hope you realize how much work you’ve put into this,” Wilkie told the students this spring. “This is a great template for looking at places outside of Montana. Our bison coordinator is hoping to do bison expansion further out, in the Southwest and Rocky Mountain West.”

Clark students continue to apply GIS technology in service to vital wildlife preservation efforts across the globe. Their data may be gathered from high in the sky, but the impact is felt wherever humans and animals co-mingle — in the sea and on the ground, especially where the elephants walk.

Read more from the fall 2019 issue of Clark magazine