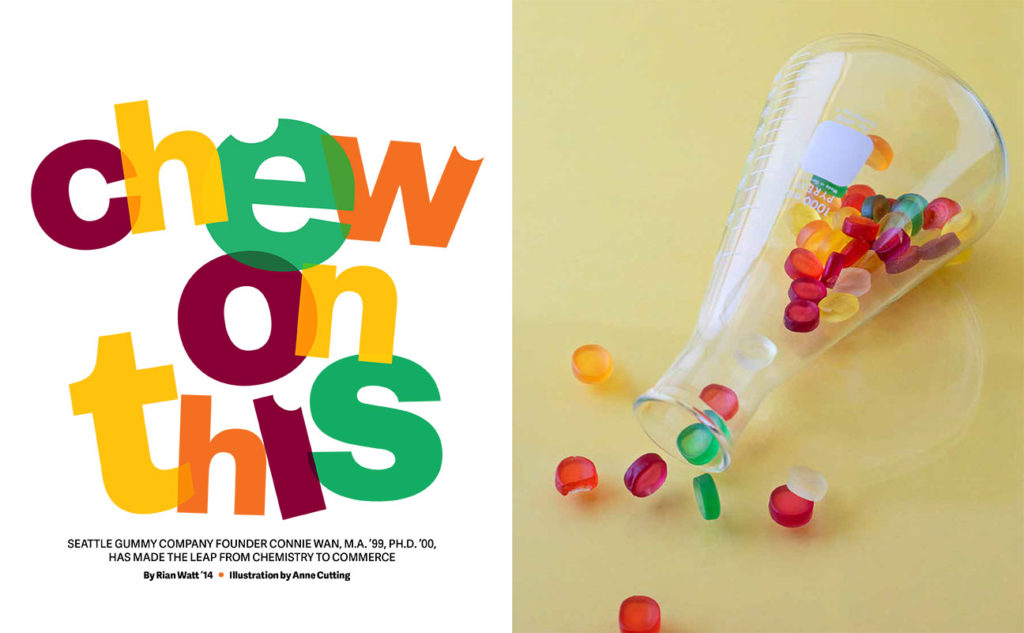 For the first time since I met her 45 minutes ago in the center of a world of her own creation — the brightly lit fourth- floor offices of the Seattle Gummy Company in the city’s historic Pioneer Square — Connie Wan, M.A. ’99, Ph.D. ’00, has paused before giving an answer.

I’ve spent the previous three-quarters of an hour marveling at her dynamism — the unstoppable combination of curiosity and follow-through that’s taken her from medicine, to chemistry, to law school, to romance novels, to venture capital, and to three coasts on two continents. Her career to date has been a series of astonishing leaps into terrains previously unknown, and I’ve now asked her what will constitute success for the Seattle Gummy Company.

Wan is sure of her answer, just not sure if she wants to share it with me. Finally, after a short silence, she says: “I have a number in my mind.”

Wan arrived in Worcester in the back seat of a friend’s car in the fall of 1995, ready to pursue a doctorate in organic chemistry under the direction of Professor Karen Erickson. She already had a medical degree from Peking University, but had come to view doctors as highly skilled practitioners of techniques and approaches first developed in chemistry labs. She wanted to be where the action was, which meant building the tools doctors used to do their work. So she came to Clark.

For a young woman who’d grown up in Shanghai and attended university in Beijing, Worcester in the mid-1990s was a far cry from the America she’d imagined from movies and TV. “I came expecting something like New York, or Tokyo,” she says. “Then I got to Worcester and was like, ‘What the heck?’ But within a month I’d fallen in love.”

At Clark, Wan found a mentor in Erickson and a group of colleagues and labmates who gave her all the practical advice and guidance she could hope for. One lab partner, Lynn Francisco, would sit down with Wan and help her with her pronunciation. “My English was terrible back then,” says Wan, recalling how Francisco helped refine her pronunciations, sound by sound. “I loved that so much.”

Wan was impressed by the degree to which her organic chemistry labmates entered the program with backgrounds that skewed nontraditional, and aspired to careers beyond the lab. One fellow Ph.D. candidate had been a lawyer; another, a pharmacist. “That really opened my eyes as someone brand new to the United States,” Wan says. “The feeling that, ‘Whoa, you can change!’ ”

Still, Wan’s first job after earning her doctorate was quite traditional: a position performing basic chemical synthesis for Merck in Boston. She’d turned down a research position at the University of Washington School of Medicine, where she would run her own experiments in oncology, to stay on the East Coast, but she realized within weeks of that choice she’d made a mistake. She quit after three months, learned the university job was still available, accepted it, and moved west in June 2000. 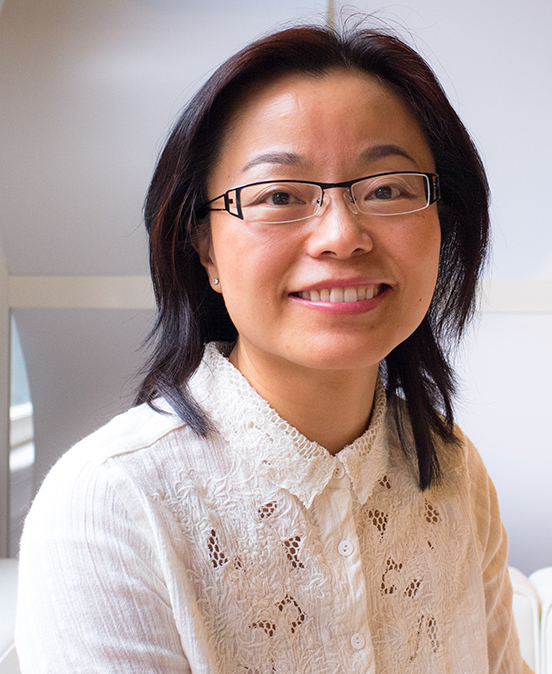 By this point, Wan had been in the United States for almost five years and knew she wanted to stay. She also had no interest in tethering her legal residency to a particular employer. While working at the medical school, she applied for a Green Card under U.S. rules for persons with “extraordinary capability” — in her case, organic chemistry. She submitted her application and made peace with the possibility she wouldn’t be approved any time soon — or ever. Remarkably, approval arrived within 30 days. Eager as always to explore something new, on the day she received her Green Card, Wan walked across campus to the University of Washington School of Law and put in her application.

A legislative fellowship she’d done with Maria Cantwell, U.S. senator from Washington, had sparked an interest in the intersection between the law and biomedical research. In her second year of law school, Wan secured a position as a patent law clerk with a midsize Seattle law firm. Three years later, while continuing to work as a full-time clerk, she’d earned her law degree.

Over the next decade, Wan worked as a patent attorney for the Seattle firm, then as an intellectual property officer for two different Northwest investment capital firms focused on biomedical technology. During these years, as she raised her son — who now attends UCLA — she became deeply familiar with the process by which lab-trained scientists turn good ideas into businesses, and how those businesses thrived or failed.

It was a busy time of life. Wan was sleeping less than four hours a night, and she began writing serialized romance novels during the wee hours of the morning to wind down after long days. Two are still available on Amazon, though one of these — a roman à clef called “Hot & Sour Soup” — earned a one-star rating from a reader furious to discover it contains not a single recipe for the titular dish.

It was during this period that Wan came across a Washington company called Pacific Natural Products, which made vitamins in gummy form — then a novel idea in a market in which gummies were mostly associated with candy, and vitamins mostly with capsules. As a young mother and trained medical professional, Wan immediately understood the potential benefits of gummies as a vehicle for vitamins: precise dosages, no goopy syrup for a screaming child to spill, and quick absorption into the bloodstream through the tissues of the mouth. She thought this vehicle also might be useful for delivering traditional medicines like aspirin, antihistamine, penicillin, or ibuprofen to children, and could benefit older individuals who may experience difficulty swallowing. She tried unsuccessfully to buy the company, then tried to put the idea out of her mind. But like a chewed gummy, it stuck.

When Wan was ready to strike out on her own, she was astonished to learn that nobody had yet managed to bring a gummy medicine product to the market. It had seemed so obvious to her that someone must have done it. Upon investigation, she found three main challenges that needed to be overcome, each difficult in isolation and potentially overwhelming in combination.

First, most medicines are extremely bitter and bad-tasting. Finding a way to transform their chemistry so they can fit inside a gummy, remain stable, and also taste good was daunting. Second, making the medicine palate-pleasing — critical for sales! — would typically require an awful lot of sugar, and any product that routinely drives up glucose levels becomes instantly questionable, regardless of the health benefits. Lastly, because gummies as a vehicle for medicine were not something that had come to market in the U.S., each new product needed FDA approval, which takes time and legal expertise.

Creating a company that makes medicines out of gummies needed someone with a background in organic chemistry, in intellectual property law, and in venture capital. It needed, in short, Connie Wan. In early 2017, Wan founded the Seattle Gummy Company.

Why the name? “I’ve seen probably a thousand pitches over the course of my career,” Wan says, “and probably 80 percent of the time I couldn’t remember the name of the company even an hour later. I swore that if I ever started my own company I’d give it the most boring name I could think of, so nobody would ever forget.”

The Seattle Gummy Company seems to have achieved many of its early goals. The company has developed a gummy structure it believes can serve as a vehicle for almost any type of medicine. Within the structure is a type of sugar, which the company has confirmed, via glucose sensors implanted in volunteers, does not substantially raise users’ blood sugar levels.

FDA approval for medicinal uses has taken longer than originally expected, but the company has stayed vital by developing a line of popular items. Energon Qube provides controlled-release carbs to help fuel workouts; Seattle Beauty delivers multivitamins to enhance skin, hair, and nails; and Functional Fruit is a new vitamin made entirely from USDA-certified organic fruit.

The company’s newest offering, chocolate-flavored gummies called Mocca Shots, are advertised as the most concentrated caffeine products on the market. Mocca Shots are sold in ski, running, and bike shops, Pacific Northwest-based convenience and grocery stores, and on university campuses. As of this writing, they’d received approval to be sold at CVS and Vitamin Shoppe outlets.

Wan is impressive in person: warm, smart, and perceptive. That does not mean she is always taken seriously.

“Being a Chinese woman in this world is sometimes about proving a point,” she says. “I’ve worked so many places, and in so many board meetings I’m the only woman, I’m the only minority. And usually in the first five minutes I get written off. A few years ago, I was in a meeting with my business partner, Tim, and he was getting the attention. I had to say, ‘Hey, stop talking to him. He’s just the pretty face; I’m the muscle.’ ”

There is a term for startups that have reached $1 billion in total valuation: unicorns. About 350 such companies existed at the beginning of 2019; only a handful are led by women of color.

Connie Wan is intent on ensuring that number will rise, and soon.

“Right now,” she says, “If there’s anybody well-positioned to make a case about what women can do in this field, I think I’m the one to do it. I have good financial backing and an amazing team. I have a number in my mind, and once I hit that number, I will move on.