Named for the father of the space age, Goddard Library helped Clark launch a successful future 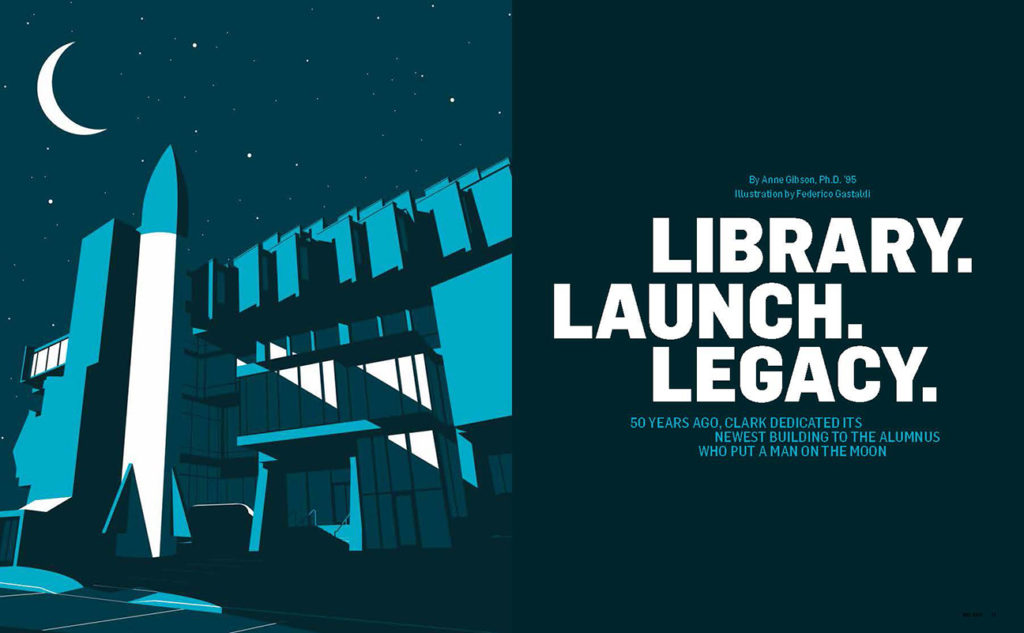 The ribbon stretched across the entrance to the formidable-looking structure and fluttered in the light breeze of a pleasant spring morning. This massive concrete, brick, and glass building, squatting atop the highest point on Clark University’s campus, resembled an ungainly alien space ship. In fact, some students would later dub it “the mothership.”

A collection of prominent individuals stood in line, scissors in hand. Among them, a trustee, an architect, a U.S. senator, an aerospace engineer, a major general.

The date was May 19, 1969. Two months later, Edwin “Buzz” Aldrin Jr., encased in a spacesuit, would lumber across the lunar surface alongside Neil Armstrong as the first humans to set foot on the moon. But this day, Aldrin wore a jacket and tie to herald the opening of the library that honored the memory of the man who dreamed of making space travel possible: the late Robert Hutchings Goddard, A.M. 1910, Ph.D. 1911, a Clark alumnus and physics professor.

More than 3,000 spectators observed the proceedings from beneath green- and white-striped tents. Among the distinguished guests were Wernher von Braun, director of NASA’s George C. Marshall Space Flight Center in Huntsville, Ala., and Dr. Charles G. Abbot, the 97-year-old secretary emeritus of the Smithsonian Institution and Goddard’s former mentor. Music by the Worcester Brass Band lent a festive air to the occasion.

The launch of this library was a big deal. In 1965, Congress had designated Clark University as the site for the National Memorial to Dr. Goddard, dubbed the Father of the Space Age. “It was not,” Clark President Howard Jefferson would later write, “by any means a local affair.”

The dedication ceremony was captured on radio and television, and in print, including filmed reports on the “Today” show and Walter Cronkite’s CBS broadcast, a front-page story in The New York Times, and stories and images in other major newspapers. Reporters from Newsweek and Oggi magazine, Italy’s equivalent of Life, were also present.

A convocation had been held earlier, with the participants proceeding from Atwood Hall to the greensward in front of the library. Honorary doctorates already had been conferred on three members of the ribbon-cutting team: U.S. Senator Edward M. Kennedy; J. Leland Atwood, aerospace engineer and president of North American Rockwell Corporation; and Aldrin, whose father, 1915 Clark alumnus Edwin Aldrin Sr., was in attendance. The 37-year-old Kennedy delivered the dedication address, fittingly, since his brother, President John F. Kennedy, had in 1961 committed the United States to landing a man on the moon, the culmination of Goddard’s pioneering research.

In that same decade, as NASA worked feverishly to launch the Apollo 11 moonshot, Clark had undertaken its own mission to complete its library. Like the Apollo journey, the endeavor required extensive collaboration, technical and professional expertise — and money.

The group wielded their scissors, made their snips, and the ribbon fell away.

By the mid-1950s, Clark University was in trouble. President Jefferson, who had arrived on campus in 1946, later wrote of his fear that the university might be forced to close. Enrollment levels oscillated, first surging with the influx of GIs returning from World War II, then nose- diving during the Korean War. By 1954, Clark had run up a significant deficit.

Beginning in 1958, the Clark University Development Council initiated a 30-month master plan to address the university’s future. The study led to the creation of The Clark Program, whose 10-year mission was to raise $21.8 million for the construction of additional residential space and a new library. The existing neo-Gothic-style library, built in 1904 and 1909, consisted of what are now the Jefferson Academic Center and Geography Building. In addition to lacking adequate study space, it was deemed too small to accommodate much-needed expansion of the book collection. A modern academic library was considered critical to Clark University’s academic success.

Responsibility for the library rested with the Board of Trustees’ Library Subcommittee, whose membership included faculty members; Esther Goddard, widow of Robert Goddard; university librarian Tilton M. Barron; and superintendent of buildings and grounds Robert E. Goodney. Trustee Alice C. Higgins chaired the group. David L. Murphy, executive assistant to the president, was charged with raising $5.4 million for the library’s design and construction.

In September 1963, the subcommittee unanimously selected architect John M. Johansen of New Canaan, Conn., to design the library. The short list of distinguished architects vying for the honor had included I. M. Pei, who went on to design Boston’s John Hancock Tower, and The Architects Collaborative, led by Bauhaus founder Walter Gropius, which had already been selected to design what would become the Fuller Quadrangle at Clark. That Johansen had designed only one library worked to his benefit — the subcommittee was open to a fresh and original approach.

Johansen’s “brutalist” design proved polarizing. It was described as everything from “an exciting visual experience” to “the superstructure of an ocean liner — going down.” The architect himself likened it to “the rear of a Xerox copier” and an assemblage of parts similar to “barnacles attaching themselves to a rock.” In a good way.

According to Kristina Wilson, professor of art history at Clark, brutalism was a reaction to what architects like Johansen viewed as the sterility of steel-and-glass skyscrapers favored by big corporations. “All of these gleaming skyscrapers were unwelcoming to the messiness of human life,” she says. “Brutalism was an attempt to return to authenticity. The messiness of concrete and the authenticity of bricks were the materials that interested these architects.”

Johansen, who worked closely with Tilton Barron, described the design process in a 1966 issue of Architectural Forum.

“I did not willfully ‘design’ this library,” he wrote. “Rather, I presided and guided the building as it developed, letting it exercise its growing confidence and will and assert its purpose.”

The resulting 134,000-square-foot library would have the capacity to house 600,000 volumes (twice the number of the collection at the time), 915 spaces for individual and group study, and rooms designated for music collection and listening, art resources, and microtext reading.

The building’s location on a low rise behind Jonas Clark Hall helped establish the library as a campus hub. It was elevated one story above grade level so as not to obstruct pedestrian pathways connecting various parts of campus, a decision that unintentionally created a wind-tunnel effect for those walking beneath the structure. Much was made of the fact that the library was located only about 300 feet from Goddard’s laboratory.

The rocket pioneer’s memory was preserved in a suite that housed the Goddard Exhibition Room, which told the story of his life, and the Goddard Collection — materials given to Clark by Esther Goddard, including her husband’s correspondence, diaries, and journals; patent applications and awards; and photographs and films of Goddard at work.

The booklet accompanying the 1969 dedication ceremony described the library’s design as one intended “to invoke a feeling of intellectual strength and a firm sense of mission, perhaps Dr. Goddard’s most outstanding personal characteristics.”

Several events marking the library’s progress kept it in the public spotlight.

Site preparation began in December 1965 with the demolition of three historic homes on the Clark campus, two of which dated from the 19th century: the red-brick Borger House, where Clark’s first president, G. Stanley Hall, resided until his retirement in 1920, and the President’s Home, described as a classic example of “Carpenter Gothic.” Approximately 100 trees and shrubs were removed from the area and replanted or stored for future use.

Groundbreaking took place on Alumni Day, June 4, 1966. Those in attendance included the president of the National Space Club in Washington, D.C., the director of NASA’s Electronics Research Center, and the director of the Jet Propulsion Laboratory at the California Institute of Technology.

Measuring 10 feet, four inches in length and built to survive 500 years underground, the capsule is a replica of a 1940 Goddard rocket. The capsule contains about 90 items and documents relating to Robert Goddard, the Space Age, contemporary life, and Clark University’s history. They include 243 of Goddard’s patents, dubbed by Von Braun as “the blueprints of the Space Age”; a retrorocket from the first Apollo mission; the will of Clark’s founder, Jonas G. Clark; and an assortment of objects that includes a miniskirt, a Beatles record, a Batman comic book, and a packet of filter-tip cigarettes.

A month before Goddard Library’s dedication, The Report from Clark University announced that “Clark’s literary heart has been successfully transplanted into a new ultra-modern body.” Meticulous planning by Barron and his team was credited with the efficiency of the move. Within a space of two weeks, 300,000 books and periodicals were moved 100 yards from the shelves of the old library to those of the new. The report characterized the process as an “intricate, complicated maneuver” that “had to be made in such a way that the free flow of books — essential to the university’s academic life — was not seriously curtailed.”

On the same page of the report, it was announced that applications for the incoming 1969-1970 freshman class had reached an all-time high. From its postwar doldrums, now with a magnificent library and two new residence complexes (Fuller and Dana), Clark had repositioned itself as a modern university. Meanwhile, in a few months, the manned Apollo lunar landing would confirm the U.S. as the leader of the Space Age.

Goddard Library’s design earned accolades from a host of organizations like the U.S. Office of Education, the American Institute of Architects and Educational Facilities Laboratories, and College and University Business magazine. A panel of Central Massachusetts architects selected it as one of their favorite buildings. The Sept. 21, 1970, edition of TIME magazine featured the library in an article about campus architecture.

“Without a doubt,” says Kristina Wilson, “this was a moment when Clark’s architecture was at the cutting edge of campus architecture nationwide.”

Just as Goddard kept tweaking his rockets, the library that bears his name has required adjustments over the years, notably to repair the HVAC system. In 2008, the Boston-based architectural firm Perry Dean Rogers Partners completed a major renovation, which included enclosing the open area beneath the building and transforming it into the Academic Commons, an 11,000-square-foot space featuring a café and spaces for study and quiet socializing.

In her essay, “The Rear End of a Xerox: The Evolution of the Robert Hutchings Goddard Library,” Madeleine Rozanski ’12 wrote, “By giving the community an inviting space to gather, the AC fulfills the original goal for Goddard Library to be the centerpiece of the expanding campus.” University Librarian Gwen Arthur described the Academic Commons as “the ideal place for students and faculty to build our community of 21st-century scholars.”

On March 13, an audience gathered in Tilton Hall to celebrate the 50th anniversaries of the Goddard Library and the first moonwalk. There was no ribbon this time, but there was cake and a champagne toast. Featured speaker Laurie Leshin, the president of WPI and a former NASA scientist, detailed the many missions that sprang from the research Goddard began on the Clark campus, then carried with him into the deserts of New Mexico, where he launched rockets that sometimes soared and sometimes failed. His experiments led not only to the lunar landing but to space stations and Mars probes. They also fired the imaginations of countless science fiction writers and filmmakers, who created worlds where the fantastical now seemed possible.

The brutalist beauty on the Clark campus has proved the perfect namesake for Robert Hutchings Goddard — a monument to his original thinking and limitless intellectual thrust. Given the profound accomplishments of the Clark alumni who have studied within its walls, the legacy of the Goddard Library will never be just a local affair. 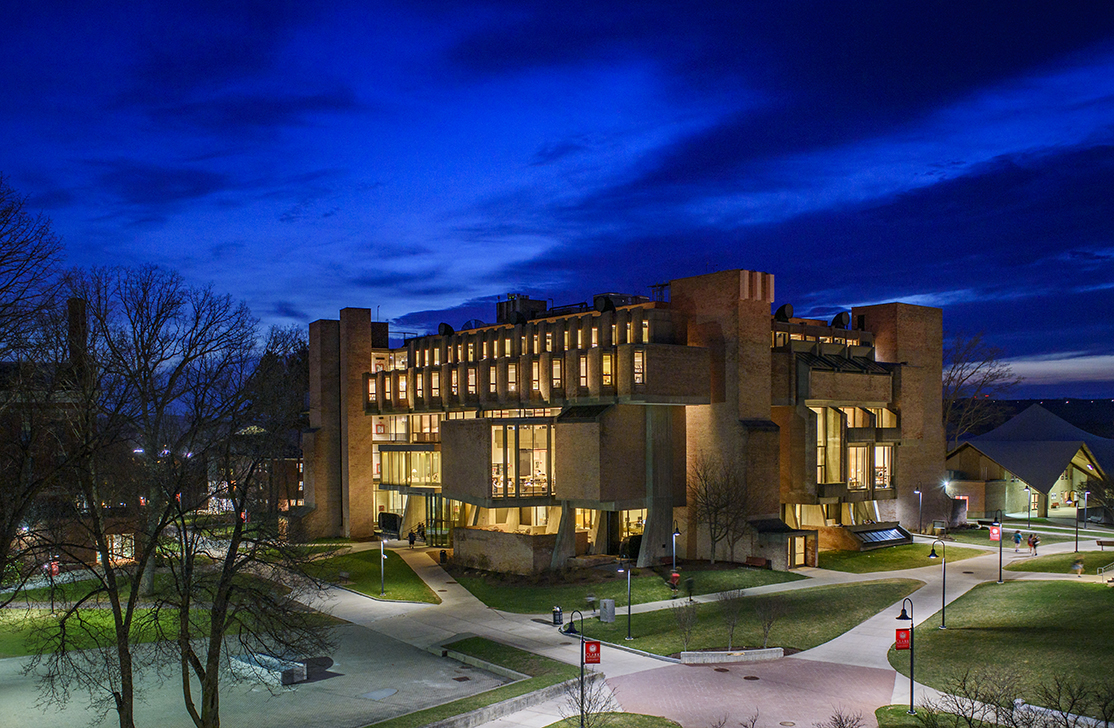