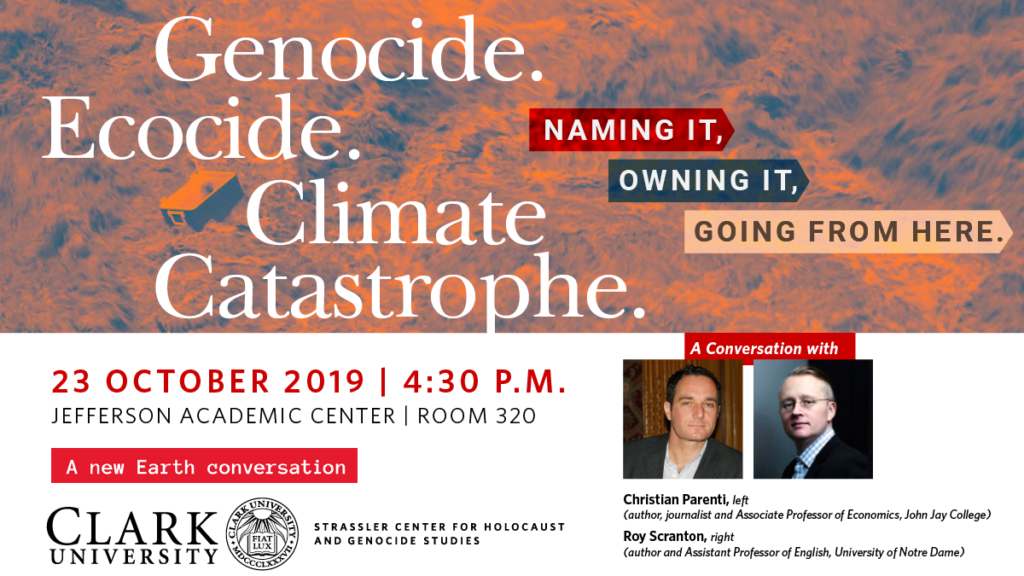 Despite a powerful shift in Americans’ collective awareness of the climate crisis, we continue to display a lack of urgency around the danger faced by our planet. Ecological damage is global, and the competition for scarce resources and climate-connected intentional human genocides are on the rise.

In response to these issues, Clark University will host “Genocide. Ecocide. Climate catastrophe. Naming it, owning it, going from here.” a conversation with journalists Christian Parenti and Roy Scranton, on Wednesday, October 23, from 4:30 to 6 p.m. in Jefferson 320.

Parenti is an investigative journalist who has reported from Afghanistan, Iraq, Venezuela, Bolivia, Ivory Coast, and China. His reporting in Afghanistan was the subject of an award-winning HBO documentary called “Fixer: The Taking of Ajmal Naqshbandi.” He is associate professor of economics at John Jay College and author of several books, including “Tropic of Chaos: Climate Change and the New Geography of Violence.”

Roy Scranton is an assistant professor of English at the University of Notre Dame, and has released two books this year: “I ♥ Oklahoma!” and “Total Mobilization: World War II and American Literature.” Scranton previously served four years in the U.S. Army, including a 14-month deployment to Iraq. He has written for a variety of news outlets, including the New York Times, Rolling Stone, and The Nation.

This event is sponsored by the Strassler Center for Holocaust and Genocide Studies in partnership with A new Earth conversation, Clark alumni Neil Leifer and Ellen Carno, and with funding from the Christopher Reynolds Foundation.