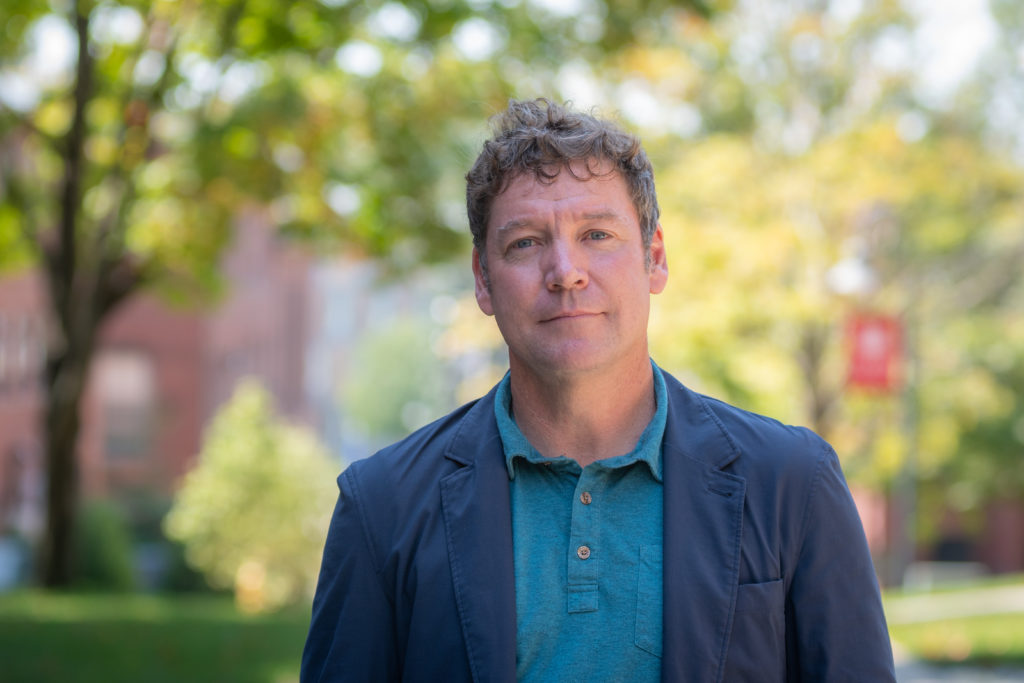 One in a series of stories introducing new members of Clark faculty.

Shadrock Roberts thinks about information differently than most people.

As co-founder of the United States Agency for International Development (USAID) GeoCenter, Roberts established new approaches to open data by combining traditional geographic information systems (GIS) and crowdsourcing. He has also worked for the Centers for Disease Control and Prevention and the crowdsourcing software company Ushahidi, where he led global research funded by the Rockefeller Foundation and the European Union. His fieldwork has taken him to Iraq, Haiti, Kenya, Thailand, Nepal, Vietnam, and Indonesia.

As a new assistant professor in Clark University’s International Development, Community, and Environment (IDCE) department, Roberts brings a fresh perspective to the Geographic Information Science Program. He has worked in the field of international development for over a decade, focusing his research on the intersection of digital technology, human geography, and international development. His goal: Create more responsive humanitarian programs.

Roberts explores how data collection may or may not translate into action. He collects and analyzes data that are then shared with decision makers and policy makers who use it to inform their programming and funding strategies. But, he acknowledges, “That’s not always how it works. There are times when decisions are made irrespective of the data that are collected.”

Roberts is concerned that crucial data aren’t being used rapidly and explicitly enough to assist vulnerable populations. “The humanitarian sector does a really bad job following up with the people that it is supposed to be helping by providing them necessary information,” he says.

In 2010, after the massive earthquake in Haiti, his experience with administrative bureaucracies led him to become part of a burgeoning group of practitioners, academics, and volunteers labeled “crisis mappers.” The group was committed to employing digital technology to share information during humanitarian crises.

In an effort to point affected people to needed resources, Roberts piloted ways to produce geographic data that allowed Haiti to update maps used for search-and-rescue efforts and delivery of aid. “We sought to get that information directly from the Haitian people, which let them speak for themselves and which also improved the logistics of aid delivery,” he says.

With enhanced data collection tools come questions of privacy and regulation. While privacy concerns are well-founded, Roberts says, “I want to focus on the geographic part of data collection to insure equity, safety, and empowerment for people whose data are being collected.”

Roberts was developing USAID’s GeoCenter when he met IDCE Director Edward Carr, who was working on issues of climate and food security. After several years, looking to move into higher education, Roberts contacted Carr.  Roberts respected IDCE’s model of promoting practitioner work coupled with its student-centric approach; the combination cemented his desire to become part of Clark.

“When I decided that I wanted to move in the world of academia, Clark was a good first port-of-call because I would interact with students, which is most important to me,” he says.

Roberts says students need to understand the importance of collaborative skills to work effectively in today’s world. The GIS program is restructuring courses to make more use of online collaboration tools that will polish their technical skills while giving them a solid foundation for partnering with people of various perspectives and circumstances.

“My goal is to have students come out of my classes with the ability to work with other people in an increasingly complex, interconnected world,” he says.