When is the danger real, and when is it a political tool?
By Anne Gibson, Ph.D. '95 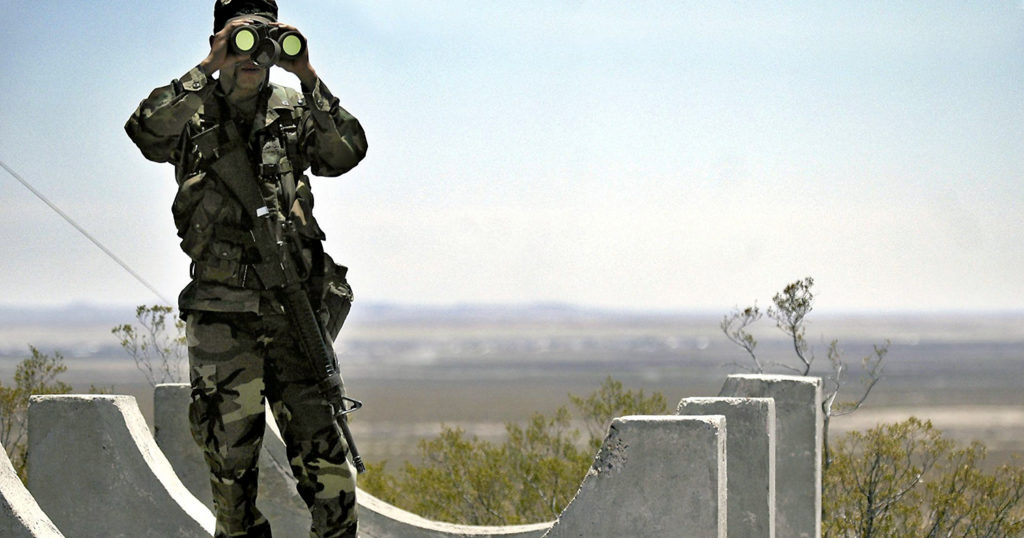 Most citizens would agree that having nuclear missiles directed at them from a distant country, or enemy tanks poised along their border, would constitute a danger to their nation’s security. But over the past few decades, other kinds of actions and issues have been identified as threats to national, and international, security. Current Republican leaders have characterized asylum seekers as a threat to national security, while Democrats have sounded warnings about the dangers of a widening gap between rich and poor.

Scholars of security studies like Michael Butler, associate professor of political science at Clark University, see such characterizations as examples of “securitization”: the process by which an issue is elevated to the level of a national or international security threat on par with a missile attack or land invasion. But are these threats real or perceived? Who decides? When is securitization merely a scare tactic intended to promote a political agenda, as opposed to the response of a society and its leaders to a clear and present danger?

In his new book, Securitization Revisited: Contemporary Applications and Insights,” Butler notes these and related questions have generated intense debate among scholars and practitioners of security studies since at least the 1980s. He has assembled a collection of contributions (including one by Katerina Antoniou ’10, lecturer at the University of Central Lancashire, Cyprus) that illustrate and critique the changing scope and focus of security studies and policy since the end of the Cold War. A subfield of international relations that emerged during the years immediately following World War II, security studies has necessarily evolved from a time when the Soviet Union and United States were vying for supremacy on the global stage, with nuclear war as a backdrop.

“Securitization itself as a concept is about 25 years old,” Butler explains. “It refers to the process by which policy issues come to be defined as security issues, with the expectation that as security issues, they’ll become priorities within a society and garner attention and resources.

“My purpose in launching this book is to take stock of what we’ve learned from the use of this concept. But I also wanted to bring together people in the next generation of scholars who want to stretch the concept and push it forward, who perhaps aren’t as wedded to it and want to interrogate it.”

In the book’s introduction, Butler and co-author Zena Wolf ’16, MPA ’17, review how the field of security studies originally was structured around three components: the nation-state, threats of violence from other countries, and threat containment and response — also known simply as “actor,” “threat,” and “response.” The end of the Cold War ushered in an era that some security studies experts dubbed a “new security environment,” one that presented new challenges — not just to national or international security but to human security as well.

Scholars increasingly suggested that prevailing definitions of actor, threat, and response were too narrow to accommodate the profound social, economic, and environmental changes taking place around the world. For instance, what are the implications if the actors of concern are individuals living in low-lying coastal areas facing rising sea levels? How might such a threat come to be securitized, and how might people even be convinced that something like rising sea level is worth thinking of as a security threat?

Butler’s book considers the securitization of issues ranging from terrorism to climate change to sexual- and gender-based violence. He notes that security studies provide a useful framework within which to analyze a wide range of phenomena. Because the securitization process can have profound and complex ramifications, Butler says, it is important to understand who is carrying out the securitization, by what means, and what audience or audiences they are seeking to convince.

Butler, a former Fulbright Scholar, says his book originated in a four-day workshop titled “Redefining Security, Revisited” that he led in 2017 with the support of Clark’s Leir Luxembourg Program. Now the program’s director, Butler is currently working on a monograph about humanitarian intervention.