Over the past year, local media outlets have been covering the story of Gwen Lynch, the last remaining student at Cuttyhunk Elementary School, a one-room building serving the remote island of Cuttyhunk, off the Massachusetts coast. The story so intrigued documentary filmmaker Juliana Lugg ’21 that she traveled to the island, where she interviewed Gwen on a dock about living in a place of great beauty and few people. 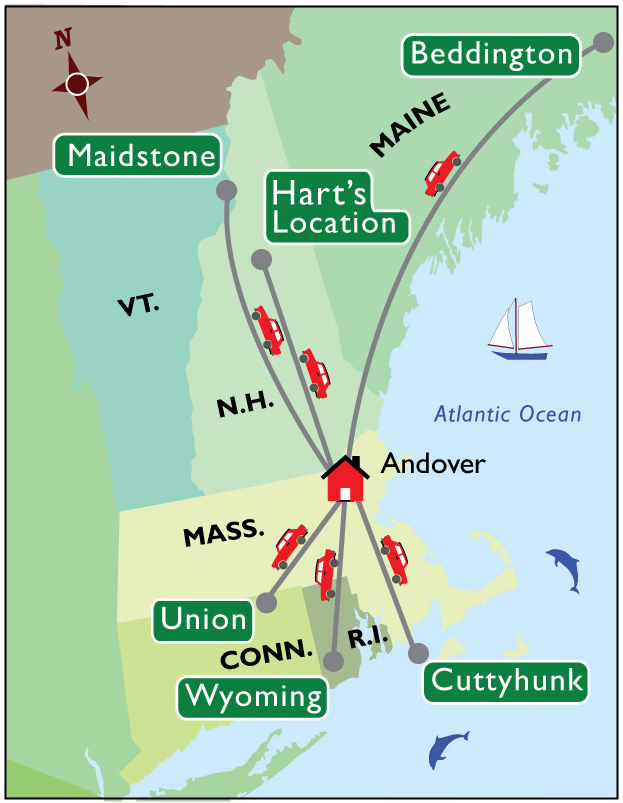 Cuttyhunk is one of six communities in New England — the others are Beddington, Maine; Hart’s Location, N.H.; Union, Conn.; Maidstone, Vt.; and Wyoming, R.I. are the others — that are the subject of Lugg’s documentary, “Small Communities.” Four of these places have, as of the last census, fewer than 60 residents. Wyoming and Union are relative giants with approximately 270 and 850 people, respectively. Some are incorporated as towns, others are not.

A media, culture, and the arts major, Lugg is one of eight Clark University undergraduates awarded Steinbrecher Fellowships to pursue creative research projects in the sciences and humanities. They started earlier this summer and will continue working on their projects through the 2019-20 academic year.

“Where you live and where you’re from has a big impact on who you are as a person,” she says, “and I have not met many people who live in areas with populations under a couple hundred. If anything, those I have met are young adults who often resent these places and want to leave as soon as they can for somewhere bigger and more urban.

“Although there are many individuals with interesting stories in my own community, I wanted to branch out to areas that I’m as not familiar with. I’ve lived in New England my whole life and there are still so many places within it that I have not been to — I wanted to amplify stories that otherwise may not have been heard.”

Camera in hand, Lugg has since visited each of the six communities — one per weekend — accompanied by friends with video experience who will be contributing footage to her documentary.

Lugg initially feared she wouldn’t find anyone willing to talk to her. To allay that concern, she prepared for her first shoot in Union, Conn., by reaching out to people she wanted to interview before she arrived. As her confidence grew, she approached the other communities without prearranged contacts, ready to do the documentarian’s equivalent of cold-calling.

Lugg typically­ began these conversations asking about the history of each place and the person’s experience living there. The interviewees discussed the challenges their towns face, the advantages and disadvantages of living in a small town, and stories about family and careers.

“I found people in every community who were kind enough and willing enough to sit down with me and talk about their stories,” she marvels. “It continues to shock me that there are people who are more than happy to take time out of their day to speak with a college student whom they have only known for five minutes. It gives me hope for a country that is divided in a lot of ways.”

The visit to Cuttyhunk, and her interview with the Lynches, is one of Lugg’s favorite memories of the summer. After ferrying across to the island, she discovered that many of its residents were using golf carts as their preferred means of getting around. Some offered Lugg and her companions rides. She was eventually directed to the Lynch home.

“I went there hoping that I would find Gwen, but just assuming I wouldn’t. We ended up, through about five different people, being connected to her dad, who did a 20-minute interview with us that was absolutely wonderful. Then he was able to tell us where Gwen was, and we ran to the dock, and she just happened to be coming off one of the boats. So we got to talk to her for a few minutes, which was really cool.”

Lugg has been making videos since high school, where she developed a special interest in documentaries. “I enjoy getting to sit down face-to-face and have a real conversation, and have real answers that aren’t scripted,” she explains, even while describing herself as shy. “I love meeting people.”

Her interest in the genre was reinforced when she took Social and Cultural Documentary Production with Soren Sorensen, lecturer in the Department of Visual and Performing Arts.

“In the course, I had the opportunity to create my own film and learn from watching my classmates make their films. Professor Sorensen taught me a lot about structuring and filming documentaries,” she says. Through several conversations, he also helped her define her vision for “Small Communities.”

Lugg has explored a wide variety of interests in her two years at Clark. She sings in the a cappella group, the Clark Keys, works in the University’s Office of Marketing and Communications, does theater tech, plays squash, and participates in TIE (Clark’s technology, innovation, and entrepreneurship club). She also has connected with alumnus Zachai Kalet-Schwartz ’15, a videographer and filmmaker in New York City, for advice about a career in filmmaking.

“These experiences have helped me understand what I’m interested in, and what I’m not,” she says. “Ultimately, they’ve all helped me to grow.”