The journal is titled Polyhedron, an essential publication for bringing new research to light in the field of inorganic chemistry, and its August cover story likely is understandable only to chemists.

But the story behind the story is noteworthy to a Clark audience.

The students were part of Professor Mark Turnbull’s Chem 250 class, whose capstone requirement is a group lab project. “The goal is always that students produce enough new results that we can write up and try to publish,” Turnbull says. “I may be prejudiced, but not inaccurate, to say chemistry is particularly good at this. We’ve been successful many times over the years.” 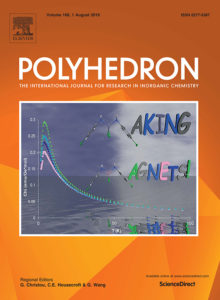 The Polyhedron article was the result of three years of research in the Chem 250 course, which is composed of junior and senior chemistry majors. Each student was asked to create a new compound — literally a material no one has ever prepared. To accomplish this they did intensive research into the current literature, designed a process to synthesize these new materials, characterized the materials, and provided all the necessary data to justify their claims. Turnbull notes than an individual student’s research rarely results in a publishable finding, but the students’ collective research often shows significant potential for a journal audience.

“The cool factor to all this is that even if the material is worthless, when you hold up a vial of it you realize it’s the world’s total supply of this particular substance because no one’s ever made it before,” he says. Students incorporating cobalt and zinc into the formation of their original compounds found more success than students who were assigned nickel and copper (the latter synthesized product was best described as “black sludge”). Still, students whose experiments did not produce the intended results will be included as authors on two upcoming manuscripts, Turnbull notes, since explaining why something did not work offers valuable context to the entire project.

Most of the compounds the students make have magnetic properties. The students collect and do the initial interpretation of the magnetic data, which may be refined further by Turnbull. He composes the final manuscript from the students’ submissions.

“This is based on the principle that students must do novel research collectively, and they must generate a final document in form, style, and completeness that’s suitable for publication,” Turnbull says.

The work continues. One of Turnbull’s students, Katie Meehan ’20, spent the summer synthesizing compounds using nickel. He expects this group project will lead to another published piece for the undergraduates, a remarkably common outcome in Clark chemistry circles.

“It’s a great example of the kind of things students do here,” he says.