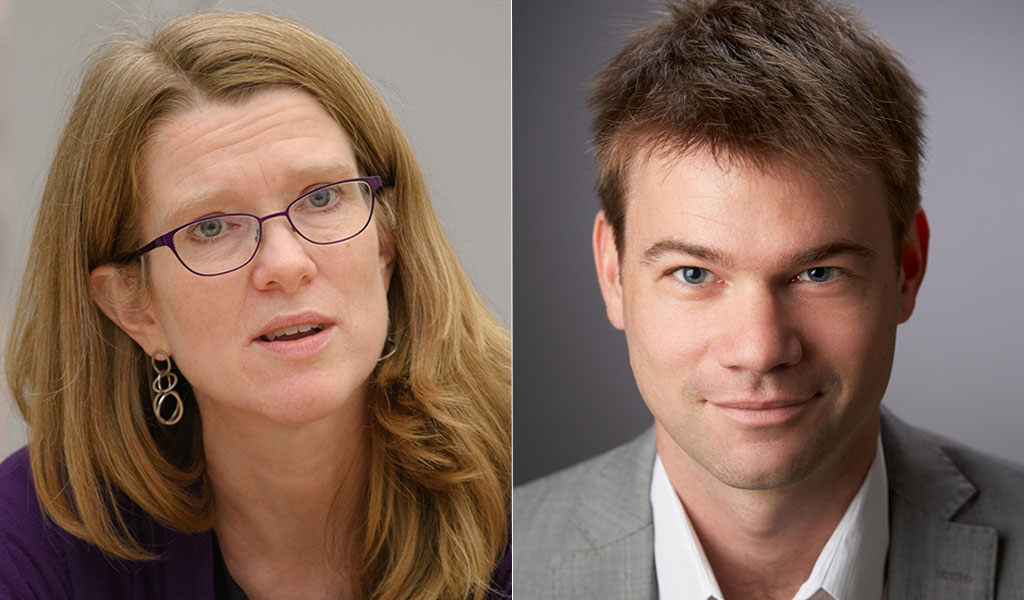 Professor Kristina Wilson (art history) and Associate Professor John Aylward (music), both of the Visual and Performing Arts Department, have been honored with prestigious awards.

Wilson has been selected as one of 21 new fellows who will be hosted this year by the Smithsonian American Art Museum in Washington, D.C. Aylward is one of 18 artists selected from a pool of 628 applicants who will receive a $15,000 Artist Fellowship from the Massachusetts Cultural Council.

Wilson will spend her four-week fellowship conducting research at the Smithsonian American Art Museum and the National Museum of American History for her forthcoming book “Mid-Century Modernism and the American Body: Race, Gender, and the Politics of Power” and a related article. The former explores mid-century modernist design and the social codes that governed its marketing and distribution in the U.S. from the mid-1940s through the end of the 1950s.

The book includes a chapter examining how Ebony magazine presented Modern design in the 1950s, and the article will examine the role of Ebony as a promoter of modern art and artists of that time.

“Although most design historians don’t think that Modernist furniture or household accessories had anything to do with constructions of race, and very little with gender, I’m arguing that it was used to maintain racial divisions in an era of resurgent Jim Crow practice, and to reinforce traditional gender roles in the wake of mass suburbanization,” Wilson says.

Wilson says she is looking forward “to sharing my work with the other scholars in residence there, and excited to have focused time for research in the unparalleled collections at the Archives of American Art. The SAAM is the central research institution in the field of American art history, and I’m honored to be able to be a part of their community.”

The annual Mass Cultural Council competition receives anonymous submissions from artists working in film and video, music composition, and photography. Aylward submitted “Angelus Novus,” a monodrama with choreography and video for soprano, flute, oboe, clarinet, violin, cello, and percussion, that draws its inspiration from a painting of the same name by Paul Klee and the writings of several well-known philosophers.

“The work is in itself a kind of poem or treatise on the human experience that became a flashpoint for me after experiencing Paul Klee’s work,” Aylward says. “It’s meant to be a raw exploration of life felt through the lenses of various cultural histories, represented in the pastiche of authors that inhabit the work’s landscape.”

In his blog, he notes: “I could not be happier to be one of this year’s Artist Fellows at the Massachusetts Cultural Council. I’m thrilled to be on this list along with composers I truly admire. I hope to make the work ahead deserving.”

This is not the first time Aylward and Wilson have been recognized for their achievements. Among other honors, Aylward received the American Academy of Arts and Letters Walter Hinrichsen Award in Music in 2018 and Goddard Lieberson Fellowship in 2011. In 2017 he was awarded a Guggenheim Fellowship.

Wilson received an Award for Excellence in 2017 from the Association of Art Museum Curators (AAMC) and AAMC Foundation for an exhibit she co-curated at the Worcester Art Museum titled “Cyanotypes: Photography’s Blue Period.” She is the author of two award-winning books: “Modern Eye: Stieglitz, MoMA, and the Art of the Exhibition, 1925-1934” and “Livable Modernism: Interior Decorating and Design During the Great Depression.”