Book examines women’s roles in combat in Ukraine, the Middle East, and Colombia
By Clark News and Media Relations

Women are engaged in combat all over the world. Who are these women, and what motivates them to take up arms? What role do they play, and what happens when the war ends? Clark University political scientist Ora Szekely and two fellow scholars answer these questions in their new book, “Insurgent Women: Female Combatants in Civil Wars” (Georgetown University Press). 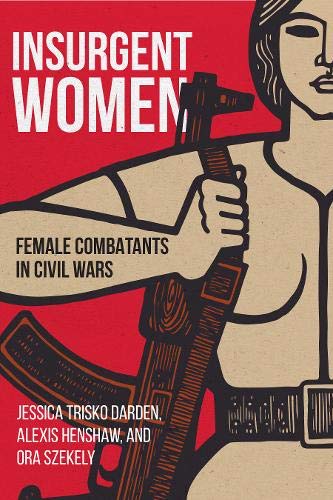 In “Insurgent Women,” Szekely and co-authors Jessica Trisko Darden, assistant professor in the School of International Service at American University, and Alexis Henshaw, assistant professor of political science at Troy University, examine three detailed case studies in asymmetric conflicts where there is a high number of women in the armed forces: in the civil wars in Ukraine and Colombia, and the Kurdish conflicts in the Middle East.

The book highlights areas where women’s participation in armed conflict plays an important role in sustaining conflict; it also features ways female combatants can be included in the peace process and post-conflict demobilization programs. The authors use interviews, archival materials, and propaganda in their case studies.

“We think the broad comparison between three different cases, and our exploration of the multiple dimensions of women’s participation in asymmetric conflict—that is, their recruitment, their participation, and their involvement in peace negotiations—provides a useful examination of women’s roles in civil war,” Szekely says.

“Women have always been involved in civil wars in a range of capacities, from providing support for male combatants to fighting themselves. The reality is, these women are soldiers, just like their male comrades,” she explains. “When we treat female fighters as exceptions, or as exotic, we run the risk of misunderstanding what is actually a standard feature of warfare, even if the form it takes in different armed groups varies dramatically.”

Dara Kay Cohen, Ford Foundation Associate Professor of Public Policy at Harvard University’s John F. Kennedy School of Government, says the book is “an important new contribution to the burgeoning research on women’s often-overlooked roles in war” and that “it will be of great interest to scholars and policymakers alike.”

Ora Szekely is associate professor of political science. Her research focuses on the foreign and domestic policies of nonstate armed groups in the Middle East, including Hamas, Hezbullah, the PLO, the PKK, and others. Her work is based on field research conducted across the Middle East. Szekely is author of “The Politics of Militant Group Survival in the Middle East” (Palgrave Macmillan 2017); she has taught at Clark since the fall of 2011 and is affiliated with the University’s programs in Peace Studies and Women’s and Gender Studies.

“Insurgent Women” is available as an ebook through the publisher, and through Amazon.com and other online booksellers.