Bill Koelsch recalls his youth, and his truth

In 1955, William Koelsch, M.A. ’59, Ph.D., a young lieutenant in the U.S. Army Transportation Corps, found himself stationed in New York City’s Brooklyn Army Terminal, then a vast military supply base. One day, he overheard a fellow officer mention the magazine ONE, a publication for the gay community. Koelsch, a self-described “country boy,” found a news kiosk and purchased a copy.

“That, and a couple of other magazines,” he recalled, “were the first positive writings by and for gay men that I’d ever seen.” It would be, he said, “the beginning of my search for a positive gay life.”

Koelsch, professor emeritus in Clark University’s Graduate School of Geography and author of “Clark University, 1887-1987: A Narrative History,” returned to campus April 8 to deliver a talk, “The Revenant Returns: A Tale of Gay Liberation.” It accompanied “Queering Clark,” an exhibit organized by Professor Robert Deam Tobin, Henry J. Leir Chair in Language, Literature, and Culture, and his students. The display was held in coordination with the Worcester Historical Museum exhibition “LGBTQ+ Worcester — For the Record,” and with similar exhibitions at Holy Cross and WPI.

“We were men of the fifties — the silent generation,” Koelsch said. “We believed what we were told by scientific experts, and therefore accepted that we were deeply flawed. The long-run effect on gay men of my generation was and is immeasurable.”

After leaving the military and returning to the world of academia in the late 1950s, Koelsch moved to Boston in 1962 to conduct research for his doctoral dissertation in American history. In 1967, he accepted a position as assistant professor of history and geography at Clark University. Two years later, the Stonewall Rebellion, prompted in part by a police raid on a gay bar in New York City, helped launch the gay liberation movement. 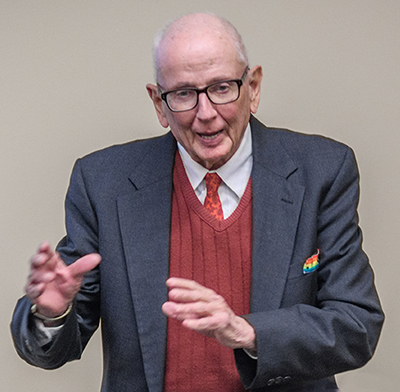 It would take another decade before Koelsch decided to become an activist in the movement. All the while he continued to teach at Clark (he retired in 1998), even as he struggled to come to terms with his sexual orientation.

While on sabbatical in Boston, he discovered the Gay Community News (GCN), the first weekly publication for gays in the United States. The stories he read of attacks on gay men spurred this normally reticent and intensely private person into action. Koelsch volunteered to write for the GCN, contributing essays until 1987 under the pseudonym “A. Nolder Gay.”

Koelsch came out at the age of 40, and met the man who has been his life partner for more than 40 years.

“I was,” he said, “finally able to put my demons aside, and live fully and proudly as an out gay man.”

In 1975, Koelsch began teaching a course at Clark on the gay liberation movement. In 1982, when the HIV/AIDS crisis was dawning, he incorporated information on that scourge into the syllabus of his course Health and Disease in the American Habitat and spoke about HIV/AIDS to church groups.

A cure remains elusive, Koelsch noted, but the movement goes on. Even today, 50 years after Stonewall, he said, the rates of suicide, attempted suicide, and homelessness are exceptionally high for LBGTQ teens.

Nonetheless, he cited reasons for cautious optimism. The man who remembers when revealing his sexuality would have meant a dishonorable military discharge and ostracism noted with satisfaction that same-sex couples can now marry, and an openly gay soldier can serve in the U.S. military. “I never expected to see either of those things in my lifetime,” he marveled.