A group of Clark professors mounts the stage in Atwood Hall swathed in caveman costumes and bad wigs. They forage for food, ponder how to make fire, and break into a song with the immortal lyrics: “We don’t like this chip … chip… chop. All our courses are a flop.”

Ah, the timeless seduction of theatre.

“What Makes Jonas Run” was performed in 1958 to commemorate Founder’s Day, aka the birthday of Jonas Clark — though exactly how the caveman motif accomplished that goal is unclear.

Nevertheless, in his cheeky review for The Scarlet, critic James Transue reported an enthusiastic response from the student audience,  which was certainly amused, and perhaps astonished, to watch professors go full Neanderthal for students’ viewing pleasure. The satirical skit was written (or “perpetrated,” as the program notes) by legendary biology professor Rudolph Nunnemacher to be a “horrifying exposé of university life in this country, showing how past policies led to our present predicament, and how this in turn will affect the coming generation.”

According to the program, the two-scene play opens in 20,000 B.C. at Old Joe’s College and concludes in the year 2,000 A.D., when Old Joe’s has been transformed into Clark University (the transition was made, of course, in 1887). Plot details are lost to the mists of Clark history. 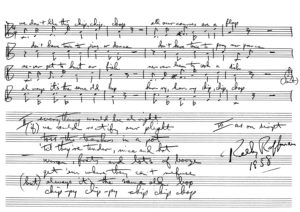 Transue praised the amateur actors, including economics professor Roger Van Tassel, “who showed flashes of his wit, which won him fame in Principles of Economics (which, despite a terrible plot and almost no characterization, seems to last forever).”

Clark athletic director Russ Granger ’38 “showed very good form and completely captivated the female segment of the audience. After the performance, he was besieged by droves of autograph hounds.”

It was all in good fun. Jonas Clark himself might have appreciated the long-lasting gain in students’ morale resulting from the momentary loss of dignity by their teachers.

Editor’s note: This story appears in the winter 2019 Clark magazine.