When you look at a window, you’ll likely notice one of two things: whatever is on the other side of the glass, or your own reflection in it. Douglas Zook, M.A. ’83, Ph.D. ’89, sees something else. He sees art.

A Boston University global ecology professor for three decades, Zook has photographed the images shimmering in the windowpanes of Boston, Kraków, Poland, and Prague, Czech Republic. He’s exhibited his photos in Europe and Boston, and has compiled them in a special edition large-format book, “Earth Gazes Back.” 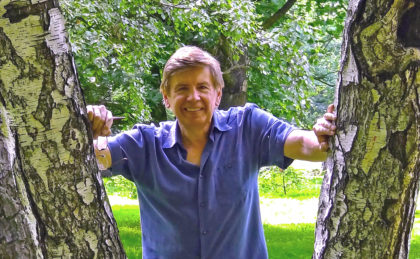 Zook discovered his unique passion in 2010 while serving as a Fulbright Distinguished Scholar at Jagiellonian University in Kraków, where for six months he taught global ecology and assisted colleagues with a project to restore contaminated soil left by the mining of heavy metals. In his spare time, he roamed the city and found himself fascinated by the reflections in the windows of the centuries-old buildings.

“There was this amazing mix of architecture, sky, trees — and their reflections in the glass had a beautiful quality about them,” he recalls. So he began photographing.

After a few months, Zook met with a group of local artists in a café and fanned out his photos on a table. “They looked at them and said, ‘You’ve got to show these,’” he recalls. Among his exhibitions was “Hidden Kraków Revealed,” a showing of 31 photographs at the university’s Auditorium Maximum.

While he’s photographed all manner of windows, including the sleek glass sheets of modern buildings, he prefers the unrefined glass in older structures.

“Those windows tend to be more interesting because of the imperfections,” he says. “Older glass has metal particles in it and is less processed. It has grains and a shimmy to it; light dazzles in it more than in modern glass.”

The reflections in the panes endow otherwise mundane objects with a measure of softness and intrigue, he says. “Something as simple as pipes on the side of a building or a couple of tree branches can have a fabulous expression,” he says. “Nature has an astoundingly beautiful and mysterious hidden realm immersed in silica dioxide — glass — and sunlight. The magic of many window panes is nearly in the category of a new photographic art.”

Zook grew up in Worcester, earned undergraduate degrees in communications and biology at BU, and worked as a community organizer in Boston before pursuing graduate-level biology studies at Clark under the mentorship of the late Professor Vernon Ahmadjian, a lichen symbiosis expert. “Funny thing is, as a kid I attended Woodland Street School [which now houses Clark’s Graduate School of Management] and I’d think, ‘Maybe I’ll go to Clark someday.’”

During his 30-year BU career, Zook led efforts to educate students who were interested in careers teaching biology. In 2010 he launched, and still directs, the Global Ecology Education Initiative, which takes him to public schools for presentations that promote an “earth-centered ethic” rather than a human-centric approach to our lives and the planet. Today he teaches at the University of Massachusetts–Boston, and continues to illuminate the grace in our glass.