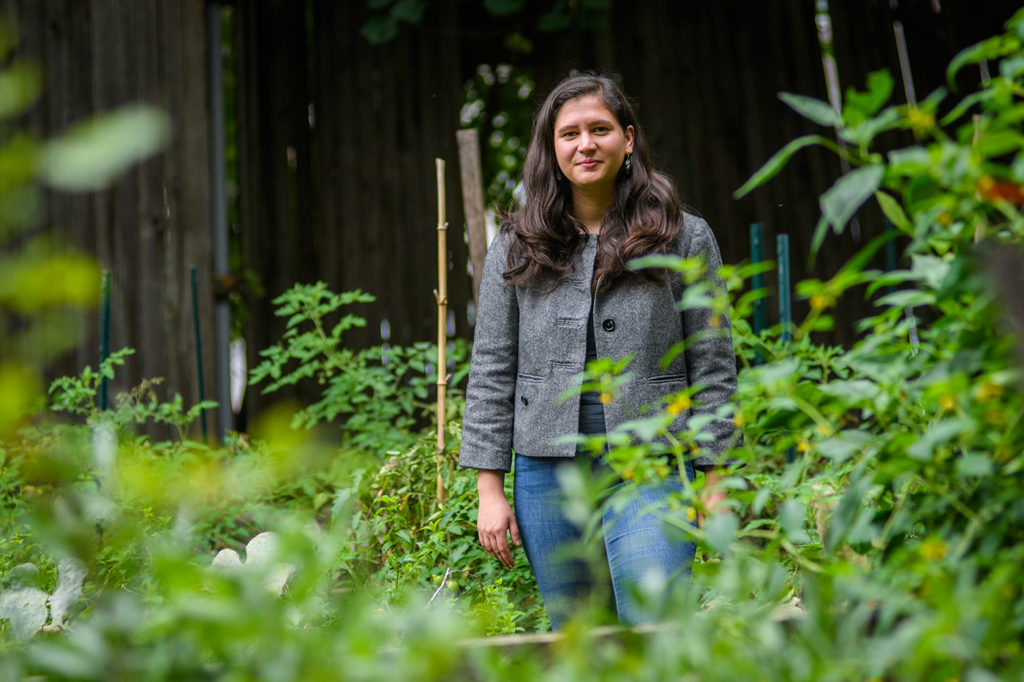 The annual symposium, informally known as the Borlaug Dialogue, is considered the world’s premier conference on global agriculture. Named for the late Nobel Peace Prize laureate and revolutionary agricultural research scientist Norman E. Borlaug, the symposium is held each October in conjunction with World Food Day. The event honors the recipient of the foundation’s annual World Food Prize, described as the “Nobel Prize of Agriculture.”

“It was a phenomenal experience,” says Naithani, of Barrington, R.I., who has received funding from the foundation to attend the annual symposium three times. This year, she mentored high school participants from across the country.

“It’s amazing to be in a roomful of policymakers and scientists and people who care so much about food security,” she adds. “Right now, I’m observing and listening to the ways we can make sustainable food security, but one day, I want to be on that stage talking about it and sharing my work.”

The Oct. 17–19 symposium capped four years of Naithani’s participation in World Food Prize initiatives. This year’s symposium focused on “Rise to the Challenge,” discussing ways to feed the 9.5 billion people expected in the world by 2050.

Naithani first became involved with the foundation in 2015 as a sophomore at Barrington High School. One of 200 students selected from hundreds of applicants nationwide, she became Rhode Island’s first representative to the foundation’s Global Youth Institute, held concurrently with the Borlaug Dialogue.

Last summer, funded by a U.S. Department of Agriculture Wallace-Carver Fellowship, Naithani interned at the department’s Office of Partnerships and Public Engagement in Washington, D.C. She was one of 30 fellows stationed at USDA research centers and field offices across the country.

As a program coordinator intern, she conducted a nationwide demographic and health study of rural American communities for the department’s Agriculture and Rural Prosperity Task Force, aiming to raise awareness about urban agriculture and to attract more youth to the agriculture industry. At this year’s Borlaug Dialogue, she presented a policy research paper based on her USDA work.

“I encourage people to know more about the history of agriculture because food is everything. It brings people together, and it’s a necessity,” Naithani says.

Since she was a child, Naithani has worked to better the world. She was inspired by her mother, who grew up in India and worked for the World Bank and the United Nations. Besides the United States, Naithani has lived in India and her father’s native Ecuador, which allowed her the opportunity to compare life in developed and developing countries.

“Ever since childhood, I’ve realized my privilege, and I’ve always wanted to go into development and health and education,” she says. “My mom has been so influential. From the start, she’s always encouraged me and my brother to get involved in initiatives and projects to make us critical thinkers.”

During high school, Naithani and her peers helped Haitians by raising $3,000 to purchase mosquito nets through Partners in Health and $10,000 to install bio-sand filters to provide clean water for 5,000 people. She also has made three trips to Guatemala with Change in Me International (CHIMEIN) to help build homes.

But once at Clark, she decided to major in international development and social change. She hopes one day to work for the United Nations or for a federal government organization like the U.S. Agency for International Development or Health and Human Services.

“In high school, I thought my only option to make a difference in the world was through medicine or to work in public health, but now I see so many other avenues through development,” Naithani says.

Clark — the only U.S. university that offers an undergraduate program in international development — will help her get there, she believes. “If it weren’t for this program, I don’t think I would have been able to take classes that are so critical and introspective of how we can make a difference in this world,” Naithani says.

A Presidential LEEP Scholar, Naithani is involved with the South Asian Students Association and Amnesty International, and serves as a mentor for the Office of Multicultural and First Generation Student Support’s summer program. Her brother, Krishna Raj Naithani ’19, also attends Clark.

Next fall, Naithani plans to study abroad at a food assistance organization in Italy, and in either Morocco or Botswana during the spring 2020 semester.

“I love learning about development,” she says, “but I love more than anything interacting with people and community. That’s what I crave.”