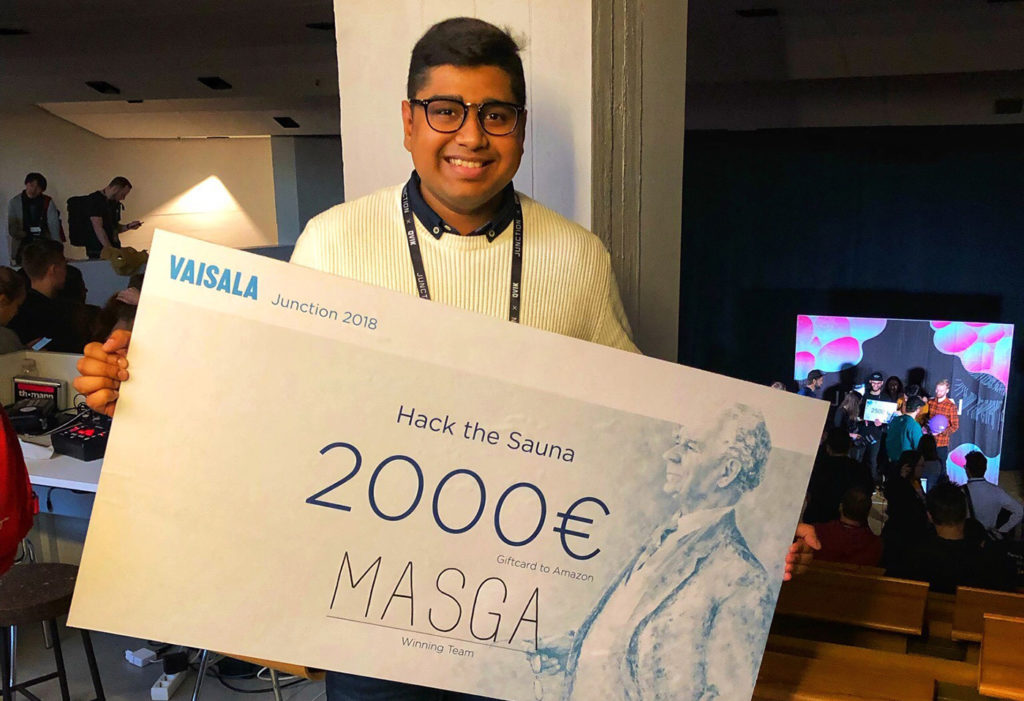 Clark University undergraduate students have won top prizes at some of the United States’ biggest hackathons this year. It was only a matter of time that they triumphed in Europe.

This past weekend, Arnab Banik ’19 was part of a five-student team that won a prize in Europe’s biggest hackathon — HackJunction at Aalto University, near Helsinki, Finland. One of the world’s biggest tech innovation events, HackJunction invited 1,300 participants out of 8,000 who applied to design computer applications while networking, attending talks, and rubbing shoulders with global tech leaders.

Like other HackJunction participants, Banik and his four teammates from Aalto University got to de-stress during the 48-hour event with a little sauna time — a perk of attending a hackathon in Finland. The Nordic country boasts 3 million saunas in a country of 5.3 million people.

In keeping with Finns’ love for saunas — and the country’s sense of humor about President Trump’s comments about climate change — his team’s project was “Make the Sauna Great Again.” Their acronym? MaSGA.

The team worked with real-time data provided by Vaisala, a Finnish company that designs observation and measurement products and services. Viasala installed sensors to measure the temperature, humidity, carbon dioxide, enthalpy (thermodynamic quantity), and other key indicators for a sauna.

“We combined all the data and analyzed and developed a simple web app that shows users how good their sauna is compared to an optimal one,” says Banik, a double major in computer science and physics from Dhaka, Bangladesh, who currently is studying abroad at the University of Sussex in England.

“Using an emoji expression in a separate interface, it also tells the manager of the sauna how to perfect it,” he explains.

The team tapped into a wide array of knowledge and skills; their majors include not only computer science but also industrial engineering and social science. To identify the optimal sauna, the students surveyed 100 users about their preferred experience.

“We used machine learning and big data techniques, along with Google Cloud and Python, to develop the backend of the project,” Banik says.

Their application caught the attention of judges. His team won the “Hack the Sauna” challenge in the artificial intelligence and big data track, taking home 2,000 euros and an invitation to visit the headquarters of Vaisala, the prize sponsor.

“Now we are planning to work with Vaisala to design a smart fire alarm that uses same technology that would improve the sensitivity of fire alarms,” Banik says.

As he told Li Han, chair and associate professor of computer science, in an email: “This was definitely a great opportunity and event for me.”

Banik joins nine other Clark students who won spots — and, in most cases, prizes — this fall at hackathons: