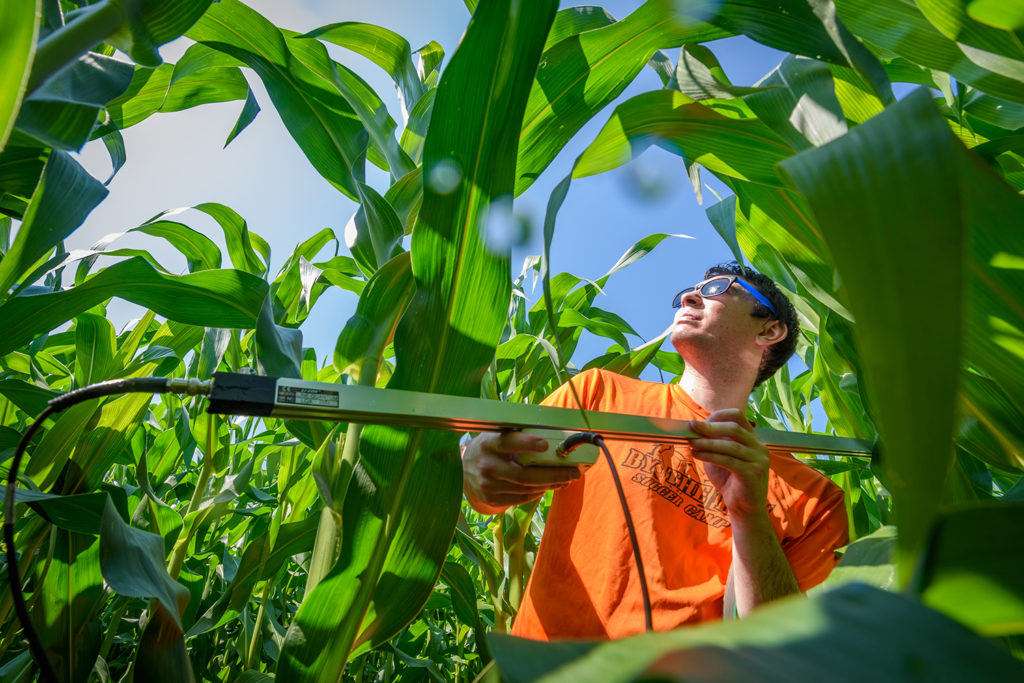 The honor of studying in Clark University’s renowned Geography Department brought Eli Baldwin ’19 from Clayton, N.Y., to Worcester, and then sent him into a cornfield.

“I became interested in modeling in two classes, GIS & Land Change Models and Modeling Ecological-economic Systems,” Baldwin says. “Although modeling is always imperfect, it is a necessary part of expanding our knowledge and a powerful tool for policy and planning.”

Professor Lyndon Estes mentored Baldwin, whose research was done under the aegis of Agricultural Impacts Research Group. Baldwin’s project was funded through Clark’s LEEP (Liberal Education and Effective Practice) curriculum, and his work will contribute to the expanding field of remote sensing through drone imagery.

In 2017, Baldwin was part of the Human Environment Regional Observatory (HERO) research program, where he worked closely professors John Rogan and Deborah Martin. HERO is a unique undergraduate-graduate faculty experience that engages in research on human-environment relationships in Massachusetts. The research conducted by HERO Fellows often leads to scholarly publications, presentations at academic conferences, awards, and honors. The 2017 HERO fellows conducted urban forestry research on juvenile trees planted by the Massachusetts State Department of Conservation and Recreation and the Worcester Tree Initiative in the previous three years in Holyoke, Chelsea, and Revere.

“I plan to later get a Ph.D. and become a professor,” he says. “Studying geography at Clark has meant learning from and interacting with great faculty and graduate students and having amazing research opportunities. That will be important for applying to graduate schools and for succeeding in one.

“My time at Clark has prepared me with specific skills, like how to use ArcMap and TerrSet. But in a more general way, it’s also taught me problem-solving and perseverance.”