Bernie Tuson hopes to master the art of computer science 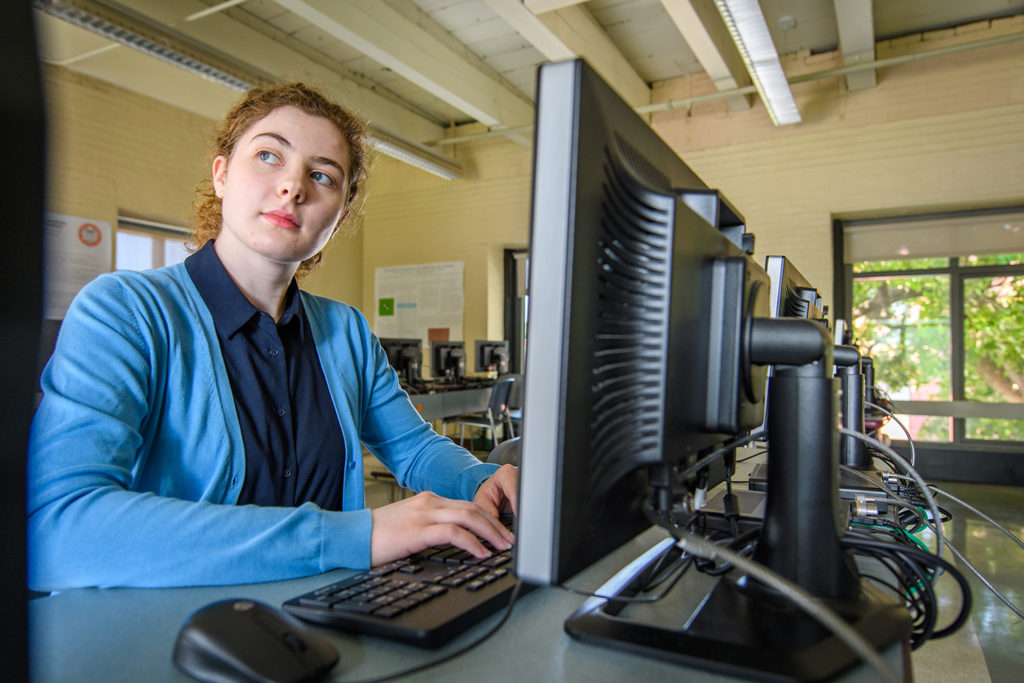 She arrived at Clark convinced she was going to major in art history. Then she took a computer science class that not only boosted her confidence but also challenged her preconceived notions of what she could do.

“A couple of people in my group were confused by one of the topics, and I had enough of an understanding to explain it to them,” she recalls. “As I’m talking, I realize that Professor [John] Magee and both of the teaching assistants had overheard the questions being asked by my group and were standing right behind me. I start to get really nervous. I finished my explanation and sat there for a moment sweating.”

She waited to be told she was wrong, but instead learned she’d correctly answered everything on the worksheet. “Since then, I’ve had more faith in my own ability to learn new things, regardless of whether I get things right on the first try,” Tuson says.

She is now a computer science major.

Tuson took that initial class to fulfill a Program of Liberal Studies requirement that exposes students to a variety of disciplines. PLS courses allow students to expand their worldviews and learn critical-thinking skills. “I love the logical thinking required to write programs, the creativity involved in coming up with solutions to different problems, and the questions that arise from considering how new technology will impact the world we live in,” she says.

The Arlington, Virginia, native first heard about Clark through the book, “Colleges That Change Lives.” The university’s location caught her eye because her father grew up in Worcester.

“I asked my dad if he was familiar with Clark. He laughed and told me that not only did he know about it — he grew up right down the street from it!” Tuson says. She later learned that her high school art teacher is a Clark alum as well.

“After hearing about Clark three times, first from the book, then my dad, and then my teacher, I felt like I had an obligation to do a little more research on my own. After a bit more reading, I knew I had to apply,” she says.

This summer, Tuson was awarded a Sherman Fairchild research grant, which allowed her to work with fellow students Syed Asad Rizvi ’19 and Breanna Desrochers ’19 on two projects, overseen by Magee, to assist people with special needs. In one project, they developed a tool that allows students to black out text in long, dense assignment sheets on the computer to improve their comprehension. This tool could be of use to students who may have difficulty reading “wall of text” assignments because of an issue like attention deficit hyperactivity disorder.

Another project involved simulating how an individual with motor impairments uses a tool called Camera Mouse, which allows a computer user to control the cursor with a camera. Gathering disabled participants for tests of tools is often difficult; as a result, the students are building a model that can alter the track of the cursor as the camera mouse is being used by an individual without any physical impairments. This way, the team can understand what use by an individual with motor impairments would look like. Tuson and her teammates submitted their work to the International ACM SIGACCESS Conference on Computers and Accessibility, and recently presented their findings at ASSETS 2018 in Galway, Ireland.

Last summer, through a LEEP scholarship, Tuson worked with Professor Magee and other Clark students on assistive technology for a visually impaired individual. She and Christina Zymaris ’19 traveled to Baltimore to present their research at the ASSETS 2017 student research competition.

Tuson plans to apply to doctoral programs in computer science, and wants to continue conducting research into human-computer interactions.

“I have grown so much during my time at Clark,” Tuson says. “I have been exposed to so many new ideas and gained many new skills. The faculty really want students to succeed, and I think they have helped me get to a place where I have a solid foundation on which to grow — as well as all of the skills I’ll need to tackle whatever challenge comes next.”