Alumnus plots a future by the numbers 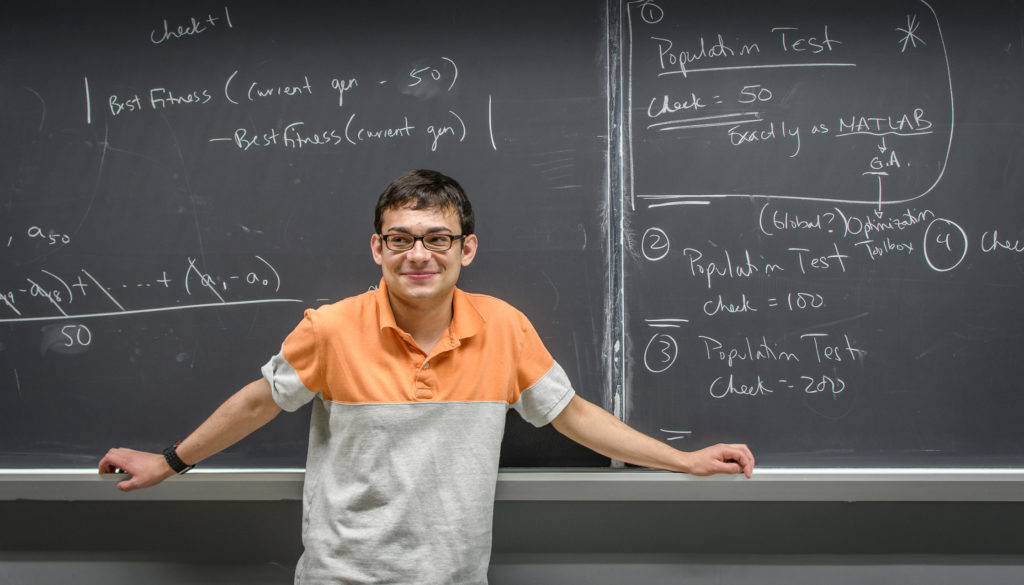 His first day at Clark University, Michael Gaiewski ’18, of Mystic, Connecticut, knew he would become a math major.

Fast-forward five years later, and Gaiewski is working toward a Ph.D. in mathematics at the University of Connecticut, an accomplishment he attributes to his time at Clark.

“I have found that many incoming Ph.D. students at UConn do not have the same experience as I do, and this provides me with an advantage compared to other students. My opportunities at Clark have allowed me to be ahead of the curve going into a Ph.D. program,” says Gaiewski, who majored in mathematics and economics.

Gaiewski truly loves math, and he found kindred spirits at Clark. “Math is like an art to me. Seeing formulas, theorems, equations, and proofs, and learning how they can be used practically, fascinates me,” he says. “A lot of professors at Clark share that sentiment.” He found that “because the Math Department is small, all the professors knew me by name, and I was able to have many conversations with all of them.”

His math professors provided him with plenty of experiences to apply his knowledge and skills. Gaiewski recalls how he aced an intensive final exam in his Analysis 1 course with Natalia Sternberg, professor of mathematics.

“It taught me that if I just sit down and stay calm, I can figure a lot out on my own without books, the internet, or other students and faculty,” he explains. “Dr. Sternberg forced me to be more independent academically, and I am very thankful that I have learned those skills.”

A Traina Scholar, Gaiewski worked as a mathematics teaching assistant for five semesters; conducted bioinformatics research in the laboratory of Jacqueline Dresch, assistant professor of mathematics; and submitted an article to a peer-reviewed journal.

“Professor Dresch was the main reason I got into research and decided to pursue a Ph.D.,” he says. “She always makes herself available and listens to students’ ideas and input.”

Gaiewski worked with Dresch to develop a parameter estimation algorithm that could be used by biologists, mathematicians, economists, and psychologists. He presented his research, titled “An Evolved Evolutionary Algorithm,” at Clark’s annual Fall Fest, which highlights undergraduate scholarship.

Fall Fest is among a long list of his academic accomplishments. Gaiewski received a Sherman Fairchild Summer Scholarship, a Carlson Scholarship, and the David R. Porter ’35 Prize for Excellence in Economics. In May, he graduated with high honors in economics by completing an honors thesis, and received the Outstanding Achievement in Mathematics Award. He is a member of Omicron Delta Epsilon, a national economics honor society.

All of those accomplishments will help him with his future plans. “I would ideally like to work in industry for a few years,” he says, “and eventually go back into academia as a teaching professor.”

Outside of academics, Gaiewski found time to play in Clark’s Jazz Workshop, Concert Band, and in the pit for Clark Musical Theatre.

Overall, he enjoyed Clark’s “tight-knit passionate community” of students from diverse backgrounds and cultures. “Multiple perspectives from many types of people,” he says, “are important for a successful community to thrive.”

At Clark, “there is enough happiness and care to go around, always,” he adds. “It’s been a great four years.”