Harrington lecture to examine ‘The Death of Expertise’

New technologies and increased access to education have provided a more constant and accessible stream of information than ever before, but has more knowledge made us smarter?

Tom Nichols, professor of national security affairs at the U.S. Naval War College, will answer that question and more when he presents the fall 2018 Harrington Public Affairs lecture at Clark on Monday, Oct. 15, at 5 p.m. in Room 320 of Jefferson Academic Center. The lecture, “The Death of Expertise,” is free and open to the public.

Some people argue that more easily available information has enabled and propagated a wave of ill-informed and angry citizenship, where all voices demand to be taken with equal seriousness, and different views often are dismissed as undemocratic elitism. Nichols brings his own deep expertise and substantial policy experience to these pressing issues of our current political climate. His most recent book is “The Death of Expertise: the Campaign against Knowledge and Why it Matters.”

Along with his post at the U.S. Naval War College, Nichols is an adjunct professor at the Harvard Extension School and a best-selling author. His areas of expertise include international relations, civil-military relations, and Sovietology. He has previously taught classes on Soviet and Russian affairs at Dartmouth College and Georgetown University, where he earned a doctorate. In 1991, he served on the personal staff on foreign policy and national defense for U.S. Sen. Jonathan Heinz, and in 2016 he was named one of nine inaugural professors in the Air Force School of Strategic Force Studies, specializing in nuclear deterrence issues. 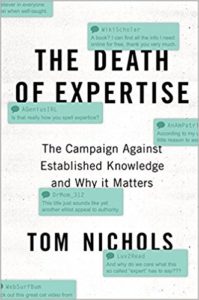 Among Nichols’ other publications are “No Use: Nuclear Weapons and U.S. National Security,” “Eve of Destruction: The Coming Age of Preventive War,” and “Winning the World: Lessons for America’s Future from the Cold War.”

His talk is offered as part of Clark University’s Higgins School of Humanities fall lecture series, “How Do We Know?” The symposium explores what it means to discover and interpret, listen and rebut, learn and reconsider, and better understand evidence in all its forms.

This lecture is also sponsored by the Political Science Department through the Francis A. Harrington Public Affairs Fund.

For more information, call 508-793-7479 or email HigginsSchool@clarku.edu. A complete list of Higgins events is available online.