These were some of the words used to describe David L. Thurlow, professor emeritus in the Carlson School of Chemistry and Biochemistry at Clark University, during a celebration of his life held at Tilton Hall on Sept. 25. Professor Thurlow passed away on Aug. 4 at the age of 69.

In his opening remarks, President David Angel pointed to Thurlow as an example of someone who was able to make a living and a life doing what he loved, someone who “took tremendous joy in changing students’ lives for the better.”

A native of Maine, Thurlow earned a bachelor’s degree in biology at Bowdoin College and an M.S. in limnology at the University of Maine-Orono before completing a Ph.D. in biochemistry at the University of Massachusetts-Amherst. After post-doctoral stints at the Institute of Genetics and of Molecular and Cellular Biology in Strasbourg, France and UMass, he served for two years as assistant professor of biochemistry at UMass before accepting a position in the Chemistry Department at Clark in 1985. 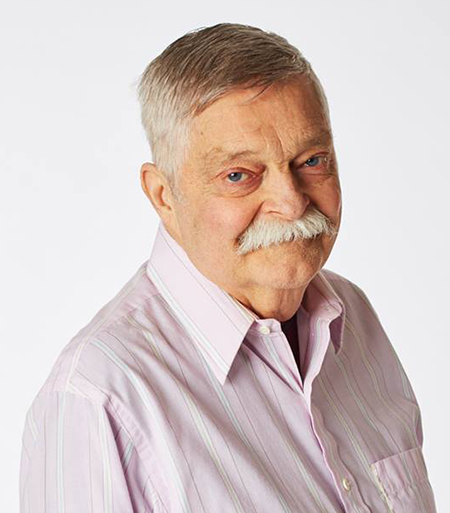 Thurlow served Clark University in what his wife Andrea described as “a perfect match” for 32 years. His many roles included teacher, researcher (with an emphasis on protein-RNA interactions), mentor to both students and new faculty, and member of numerous university committees. He was the only Clark faculty member to earn the university’s Outstanding Teacher award twice and its Outstanding Adviser award four times. During his tenure at Clark, in addition to receiving nearly $1 million in research grants from organizations like the National Institutes of Health and the National Science Foundation, he served as research adviser to over 20 biology and chemistry Ph.D. students, and oversaw more than 100 undergraduates in their research.

But it was in his role as adviser to undergraduates interested in pursuing careers in the health professions that Thurlow found a special calling. Beginning in 2000, he was a member of what is now Clark’s Prehealth Career Advising Program, and two years later assumed the position of chair upon the retirement of Professor Edward Trachtenberg. From 2017-2018, Thurlow co-chaired the program with his successor Denis Larochelle, associate professor of biology. During Monday’s celebration, Larochelle noted that Thurlow had postponed his retirement by a year to coach him in his new role. Thurlow was also, for many years, an active member of both the Northeast and National Associations of Advisors for the Health Professions, offering, as one colleague noted, “years of quiet and strong leadership.”

In 2015 Thurlow assumed the directorship of Clark’s new undergraduate concentration in public health (since renamed Health, Science and Society), which was developed in response to the essential role of public health in an increasingly globalized society.

Thurlow’s dedication to students interested in the health professions also revealed itself in papers he published on that topic, including what colleague Mark Turnbull, professor of chemistry, described as the study. Thurlow’s research showed that students who started at community colleges performed just as well in medical school as those who completed all their undergraduate studies at a four-year institution. According to Turnbull, this paper “really changed the way that both the medical schools and the professional organizations viewed community colleges. I know that Dave was particularly proud of the results of this work.”

In addition to Thurlow’s thoughtful counsel, students benefited from the information and resources featured on Clark’s health careers website that he managed with the assistance of Wendy Praisner ’79.

Praisner, who has served as assistant to the director of Clark’s Prehealth Career Advising Program since 1987, lauded Thurlow in a recent email:

“Dave was one of the kindest and most caring people I have known at Clark. He was very supportive of his students, and they appreciated the time he spent with each of them, planning out their courses and helping them with their applications. It was a great pleasure to know and work with him closely for 16-plus years.”

Praisner was just one of the many family members, faculty, staff, students, and chemistry department alumni who gathered to celebrate the life of Professor Thurlow.

One of his former advisees, Pinky Htun ’17, a biochemistry major who is now an associate scientist with Bluebird Bio in Cambridge, Mass., recalled that, as a first-year student, Thurlow was “brutally honest” about the hurdles she faced to get into medical school. During her senior year, when she confessed to Thurlow that she was confused about her next steps, she recalls him saying, “Fear paralyzes us. That realization will set you free.”

Chrystena Ewen ’96, a high school chemistry teacher, remembered Thurlow’s kindness, and how he never made her “feel less” during a time when she was struggling in one of his courses.

Assistant Professor of Chemistry Donald Spratt noted that Thurlow and his family are “the most generous people I have ever met,” and that he will “live on in the faculty whose lives he has touched.”

Thurlow, said LaRochelle, led by example. “He showed what it meant to be a good person, and his impact extends beyond Clark University.”