What’s a Bernie Sanders supporter doing working for a Republican?

“You don’t let party get in the way of helping people out,” says David Sullivan ’20, a political science major at Clark University.

“Politics in Massachusetts are very, very different than they are on the national landscape,” Sullivan says. “People see the ‘R’ next to his name, and they’re out for blood. But Jim’s a socially liberal guy, just like many other Massachusetts Republicans. Occasionally, there are disagreements between us, but they’re brought up and discussed. Regardless, most of our job at this local level is constituent-oriented, not political. I wouldn’t sacrifice my own values for any job, and I certainly don’t do it here.”

Sullivan got his start at the State House the summer after he graduated from high school. Kelcourse had given Sullivan’s class a tour of the building and invited the students to apply for internships. In his three summers since, Sullivan has been a part of Kelcourse’s initiatives in the areas of education, the environment, pay equity, and LGBTQIA rights. 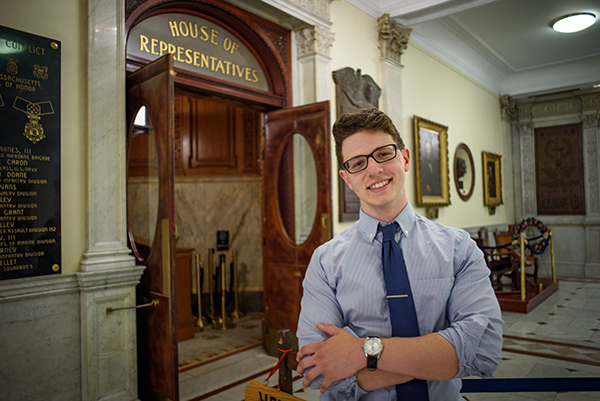 “This summer I was most involved with environmental issues concerning the Merrimack River,” Sullivan says. “It’s a central geographic landmark in our district, and the EPA ranks it as one of the most endangered rivers in the country. I was tasked with doing research on a huge environmental bond bill.”

Sullivan filed amendments that helped ensure the bill would get a piece of the $2.4 billion allocated for district projects.

Interning in the summer months offered Sullivan a glimpse at one of the busiest times on Beacon Hill; July is especially chaotic, as the year’s budget is decided. “Everybody’s fighting for a little bit of money,” Sullivan says. “Jim cares deeply for his community, so there’s a lot we have to do to be sure we succeed.”

Sullivan is putting his political background to good use at Clark. This past spring he earned a spot on the Undergraduate Student Council Executive Board, where he’ll serve as treasurer alongside Eric Barrese ’19 (president), Sameen Azad ’21 (vice president), and Nicole Luka ’21 (secretary). This won’t be a totally new experience for him — Sullivan has represented each of his residence halls on Student Council since entering Clark in 2016.

He enjoyed the experience, but it did little to prepare him for the challenge of running for the Executive Board.

“We faced some very popular competition with some great ideas,” he says. “It was three weeks of constant politicking — both sides fighting for their ideas. We were always on social media, sharing new ideas and proposals.”

The election enjoyed one of the highest turnouts in years, with roughly 900 students casting votes.

“I felt more relief than excitement,” says Sullivan, noting that the campaign was exhausting. He looks forward to the Student Council being more transparent about its activities, and rolling out a new website.

All this will do nothing to take away from Sullivan’s spot on Clark’s nationally recognized Model U.N. team, or his studies. “Clark’s Political Science Department is just stellar,” he says, noting the mentorship of Professor Mark Miller. “He’s taken us to see arguments at the Supreme Court in Washington, and he’s always available to help out and suggest new ideas.” Sullivan is interning with Worcester’s District Attorney Joe Early this fall, thanks largely to Miller’s guidance.

With Model U.N., Sullivan enjoys learning the nuances of persuasion. When Clark hosts its annual Model U.N. competition for high school students in November, he will serve as secretary-general.

“It’s going to be a lot of fun,” he says. “[Model U.N. is the] best training for political science, marketing, and even life in general. It’s the most practical experience you can get to develop soft skills,” like demonstrating emotional intelligence, resilience, and effective communication.

As Sullivan has come to learn, it’s those soft skills that come in particularly handy in the hard world of politics.