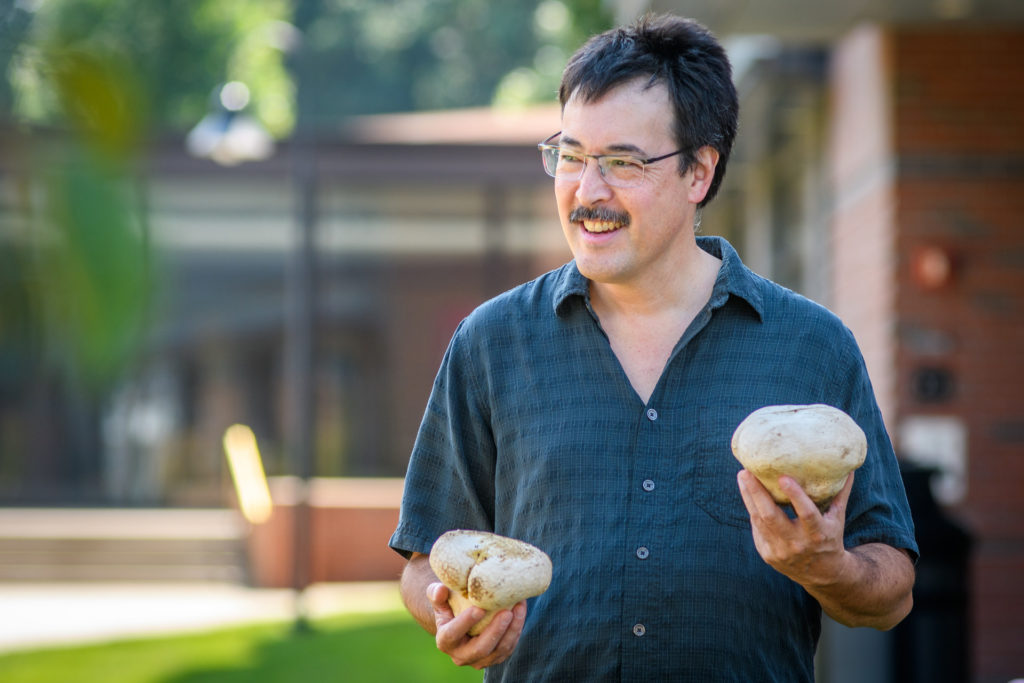 If you want to find what toenail fungus, penicillin, yeast and shiitake mushrooms all have in common, a visit to a new fungus exhibit at a local science museum might be in order. The exhibit, which illustrates fungal diversity, the decay process, and the role of fungi in the carbon cycle, is the result of years of collaboration between Clark University Biology Professor David Hibbett and the exhibit staff at the EcoTarium, Worcester’s museum of science and nature; the exhibit features artwork created by a recent Clark alumna, Amy Yeager.

Hibbett will lead museum visitors through a tour of the fungus exhibit at noon Saturday, September 8, at the EcoTarium, 222 Harrington Way, Worcester. The tour will be preceded by a Fungus Foray at 10:30 a.m. (participants are encouraged to dress for a walk in the woods).

Loring and the EcoTarium staff started the process in the winter of 2015 by surveying museum visitors to determine what the public did and did not know about fungi.

“It was great to partner with them. On my own I would have produced something very different and not as effective for their community of visitors,” Hibbett said.

“This is not my usual crowd,” he said, referring to the budding young scientists who are the intended audience for the exhibit; the Clark professor spends most of his time speaking to other scientists, graduate students or undergraduate science students.

Hibbett said the process of reworking the exhibit text for museum visitors — the majority of whom are kids — took a bit of work.

“There was a lot of back and forth on the text to make it super-condensed, really understandable, informative and correct,” Hibbett said. “It’s been fun. I really enjoyed the challenge.”

Artist Amy Yeager, who graduated from Clark in May of 2017 with a self-designed major in scientific illustration, received funding to work with Hibbett and the EcoTarium to create illustrations for the exhibit — two, six-to eight-foot-wide illustrations of the “Fungal Tree(s) of Life” that detail the diversity of fungus.  Yeager created illustrations for Hibbett’s lab as an undergraduate.

The fungus exhibit, which takes up a fraction of the main floor and comprises three exhibit stations with interactive panel displays and samples, is designed to be informative, educational, and fun (not to mention durable and resilient!).  Loring describes one station as “a multi-sensory exploration of what happens when a log falls in the woods.”

The exhibit is a permanent display at the EcoTarium, and could remain on the museum’s main floor for up to a decade. It is situated alongside portions of “City Science,” an urban ecology exhibit created in 2013 by former Clark geography professor Colin Polsky and his undergraduate students.

“Our partnerships with researchers at Clark are a win-win,” Loring said. “The professors provide us with fresh science content for our visitors, and in return we offer expertise in communicating science to a general audience in an informal learning environment.”

Hibbett, who has been with Clark since 1999, is considered one of today’s leading researchers in the analysis of fungal relationships through DNA analysis. At Clark he concentrates his lab work in evolutionary biology and ecology of fungi. He documented his partnership with the EcoTarium on his blog.

For more information or questions about the exhibit, or the Fungus Foray, call Rachel Stoff at 508-929-2738 or visit https://www.ecotarium.org/.  Admission to these events is included with museum admission.

‘We want to create a community of scholars’