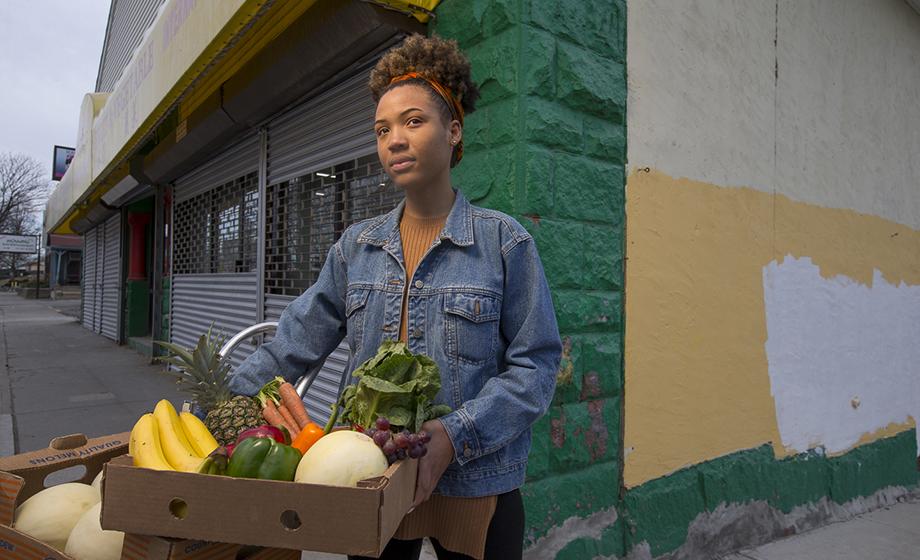 What do you see when you stand on a city street corner? Houses. Cars. People conducting a thousand daily routines.

Kaiomi Inniss ’19 sees something very different. She sees a desert.

The rising Clark senior is attuned to the lack of fresh, nutritious food available to the residents of struggling urban neighborhoods, and has geared her education toward tackling the problem of these so-called “food deserts.”

“I was so surprised to see the level of food insecurity in the U.S.,” says the global environmental studies major, who grew up in Barbados and whose family lives in Trinidad. “I want to know why that is, and focus my career on fixing it.”

Inniss comes by her passion naturally: Her father works alongside the minister of agriculture in Trinidad, promoting food-sustainability initiatives across the island. He also grows the family’s food, which helped fuel his daughter’s desire to bring fresh food to those who have little or no access to it.

In 2016, Inniss and fellow Clark students accompanied John Dobson, associate professor of practice in the Graduate School of Management, to Bogotá, Colombia, where they helped women in low-income areas build their own urban gardens, then develop and execute a business plan to sell their produce.

Her awareness of international issues also comes naturally. In February, Inniss chaired the sixth annual Third Culture Kids and Global Nomads Conference at Clark, which brought together students from several colleges and universities to talk about their experiences living in multiple cultures and countries. Inniss herself has lived in Trinidad, Barbados, and the United States. Being a Third Culture Kid, or TCK, is “usually marked by constant moving and travel, many languages, and, sometimes, multi-ethnic identities,” Inniss wrote on ClarkNow. “The TCK experience is unique, yet in a rapidly globalizing world it’s becoming more commonplace.”

She’s brought her awareness of heritage into a lighthearted (though hard-working) role as choreographer and performer in the International Gala, Clark’s annual celebration of global music and dance. Inniss also is vice president of the Caribbean African Student Association, which hosts several cultural and awareness events every year.

“I feel at home here,” she says. “When I’m at my parents’ house, I say, ‘I can’t wait to go back to Clark.’ The atmosphere, the people, the professors — I think made a great decision. This is a very chill place and fits with my personality.”

In the future, Inniss hopes to merge her devotion to food justice and urban development with her passion for writing, which blossomed at a young age. “Most parents won’t pass a toy store with their children because their kids will want to buy everything inside,” she recalls. “My parents wouldn’t pass by a bookstore with me for the very same reason.”

She’s an avid blogger and creative writer, and recently interned at a local magazine. But as an aspiring environmental journalist, Inniss sees a more focused purpose for her words. When she observes a struggling neighborhood that could use an articulate voice on its behalf, she has one goal: “I want to write the truth.”