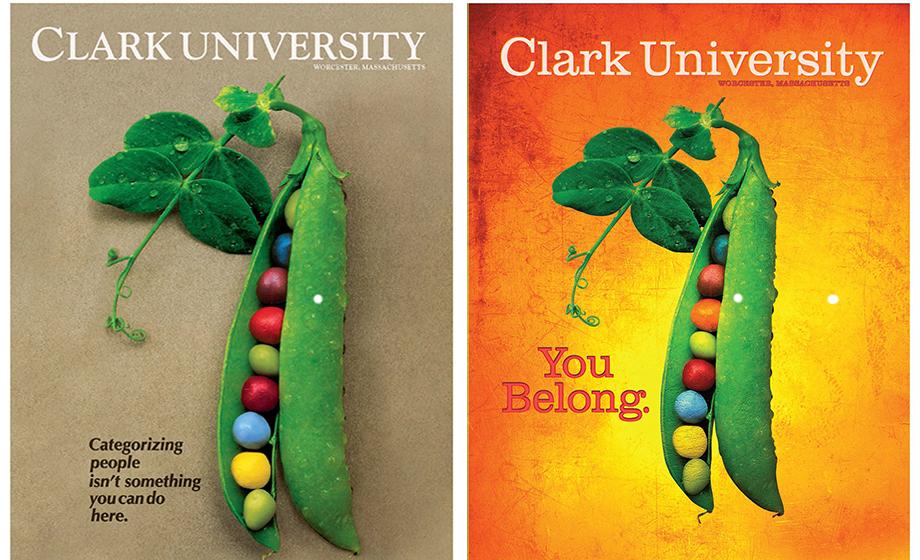 On a hot August Day 34 years ago, designer Keith Carville and photographer Chuck Kidd drove to a vegetable farm in Hubbardston, Mass., painted some peas, and snapped a picture. The resulting poster of vibrantly colored peas nestled inside a pod, paired with the tagline, “Clark University: Categorizing people isn’t something you can do here” resonated with students and alumni, who appreciated the message that Clark is a community of individuals — all are different, and all are welcome. 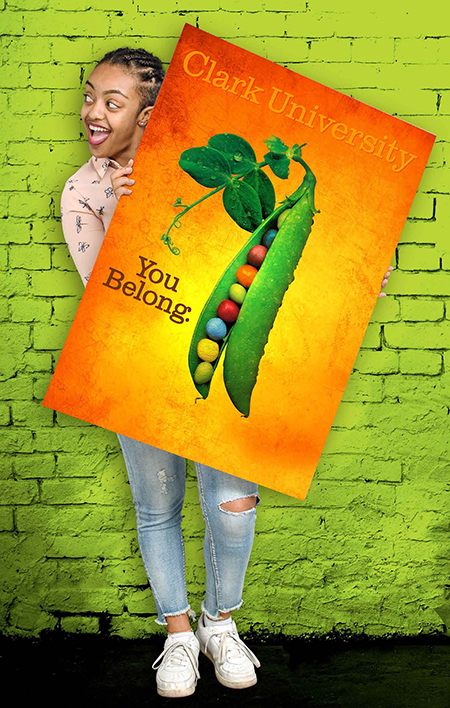 The pea pod poster quickly began appearing in dorm rooms across campus, and found its way onto the office walls of high school guidance counselors. The meaning behind the multi-colored fruit (yes, peas are fruit) struck such a deep chord that the poster remains displayed on some of those same walls, many years after the pea pod was decommissioned.

“The poster may be old and tattered, but the guidance counselors don’t want to replace it,” says Terry Malone ’01, MSPC ’09, director of admissions at Clark. “They understand the importance of the message, and their students do, too.”

Here’s another message to make many Clarkies happy: The pea pod is back.

The memorable image has been refreshed and reintroduced as the centerpiece for the University’s admissions materials with the fresh tagline, “You Belong.” High-schoolers attending college fairs are seeing the pea pod at Clark stations, and prospective students have already received a series of informational postcards featuring current Clark students posing with the new poster.

As word has gotten out, Clark alumni, particularly those from the ’80s and ’90s, have welcomed back the pea pod like an old friend.

“It’s still one of my favorite things about Clark,” says Tad Overbaugh ’93. “After dealing with all the cliques in high school, this was really refreshing. It set the groundwork of respect for all the different kinds of people you might come across here.”

For Cate Whitfield ’92, the pea pod’s return reinforces Clark as a place “free from judgment.”

“That’s so important, especially for young adults on their own for the first time.”

In an essay published by Clark some years ago, Hank Fradella ’90 captured why the pea pod endures.

“I was hard to categorize in high school, as I didn’t really fit the mold of being a ‘jock,’ or a ‘prep,’ or drama/music ‘geek’ — even though I was a little of all of them,” Fradella wrote. “The pea pod poster was not propaganda. It was truth. Nearly everyone I knew at Clark ‘fit in’ because there weren’t any predefined molds to which we had to adhere.”

If proof is needed that the Clark universe hums to its own special rhythm, consider this: The man who designed the original pea pod poster in 1984 is the same person responsible for introducing the reimagined version.

Carville was working at Clark in 1984 when Annette Kahn, director of communications, asked him to design a poster with multi-colored peas inside a pod — an image already existing as a watercolor illustration. “Chuck Kidd knew a guy with a farm in Hubbardston, so we went in search of the perfect pea pod,” Carville recalls.

The duo engineered “perfection” by positioning the curly stem of one pea pod atop the body of another. Carville left two green peas in the pod, removed the rest, and fashioned seven new peas out of putty. He spray-painted the peas different colors, then gingerly placed them inside the pod. Once the peas were in place, he misted the pod with water and laid it on a sheet of sandy-colored paper. Kidd took his photos, and a Clark symbol was born.

Carville worked at Clark about six months before leaving for other opportunities, but this would not be his last encounter with the pea pod. Far from it.

In 2010, Carville was considering returning to Clark as creative director when he mentioned to Paula David, vice president for marketing and communications, that he’d designed the pea pod poster. She was stunned. “This is kismet,” she said, noting the image’s iconic stature in the Clark community. “You’ve got to come here. It’s meant to be.”

Carville joined the Clark MarCom team and crafted materials reflecting the University motto, “Challenge Convention. Change Our World.” But nostalgia for the pea pod never waned; Carville continued fielding requests for the poster from both the Admissions and Advancement offices.

The decision to revive the pea pod acknowledged that a representation of Clark so convincingly entwined in the DNA of past generations could be just as compelling for a new crop of Clarkies. To launch the pea pod-themed campaign, current students were photographed with the revised poster, bearing witness to the University’s “You Belong” spirit.

“When I came here, I met people with different backgrounds and different perspectives. That’s something I didn’t have in high school,” says Juliana Lugg ’21, of Andover, Mass. “To me, the pea pod says you can be who you are, while, at the same time, you can learn from other people — all under the umbrella of Clark.”

Several years ago, Carville was sifting through old photos when he found a black and white picture of his wife’s friends, snapped in the mid-’80s, as they clowned around in the teachers’ lounge at Falmouth High School in Maine. Something caught his eye in the background. There on the bulletin board behind them was the familiar pea pod poster he’d created three decades earlier.

At the time, he didn’t know he’d one day be reinventing the distinctively inclusive plant. How could he? Few things have the staying power of the Clark pea pod. As Carville has discovered, “People who love it, love it forever.”