The Clark University profile includes extensive comments from Clark students who were surveyed about their experience. For example, the University is “extremely student-focused,” with a “constant flow of ideas and the encouragement to discuss them.”
By Clark News and Media Relations

Clark University once again has been recognized by The Princeton Review as one of the country’s best institutions for undergraduate education, and is included in the 2019 edition of the annual college guide, “The Best 384 Colleges.” 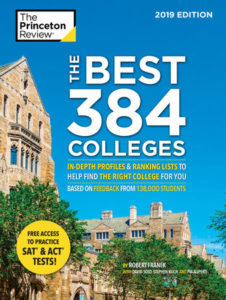 Of America’s 2,500 four-year colleges, only about 15 percent are profiled in the Princeton Review’s flagship college guide — along with four schools outside of the United States.

The Clark University profile includes extensive comments from Clark students who were surveyed about their experience. For example, the University is “extremely student-focused,” with a “constant flow of ideas and the encouragement to discuss them.” Students also laud their professors, who do an excellent job of “showing instead of telling, and demonstrate rather than just state concepts. … [and] make every attempt to have their classes go above and beyond the classroom.” Students also praise the LEEP Center, named after the University’s Liberal Education and Effective Practice educational model, and note it can “open doors you didn’t even know were there.”

Students quoted also spoke highly of the “very diverse” student body. “We keep Clark weird and it feels like a family,” says one. Students at Clark are “open-minded and unafraid to stand by their views, stances, and beliefs,” and are highly engaged in “political activism, challenging social norms, and equality and mutual respect.”

Clark also is ranked on several Top-20 lists. The University is no. 18 on the list of schools with the happiest students, no. 13 among schools with students most engaged in community service, and no. 16 on the list of schools considered most LGBTQ-friendly. Clark also appears on the unranked lists of “Best Northeastern Colleges,” “Colleges that Pay You Back,” and “Green Colleges.”

“The Best 384 Colleges” (Random House/Princeton Review) commends Clark University and others for outstanding academics, which is the primary criteria for inclusion in the book. The choices are based on institutional data collected about schools, visits to schools over the years, feedback gathered from students, and the opinions of Princeton Review staff and its National College Counselor Advisory Board.

One of The Princeton Review’s most popular guides, The Best 384 Colleges rankings are based on surveys of 138,000 students at 384 top colleges that includes a wide representation by region, size, selectivity, and character. Published annually since 1992, the book has detailed profiles of the colleges with rating scores in eight categories as well as ranking lists of top 20 schools in 62 categories. More information on the rankings and methodology can be found here.

Clark featured in The Princeton Review's 2022 Guide to Green Colleges