For Samantha Hughson ’19, technology and theatre both compute 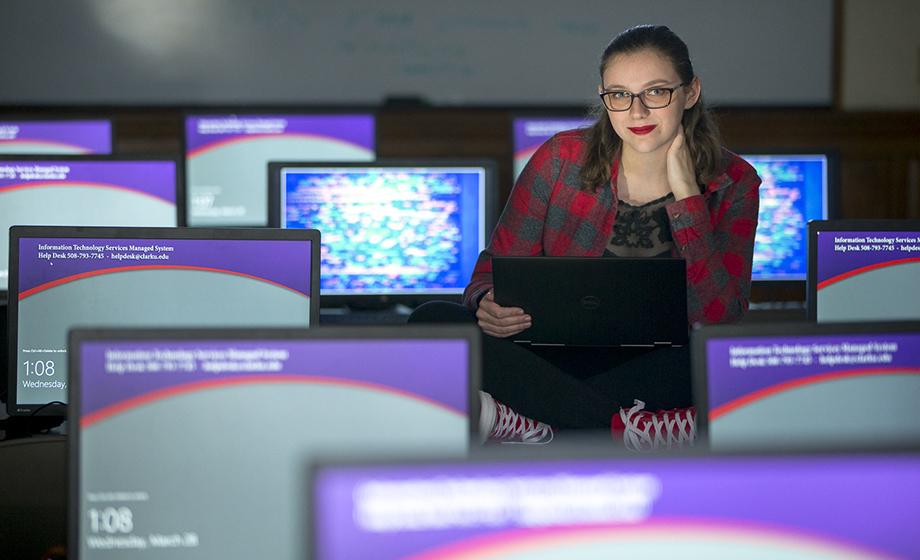 As the only girl in her AP Physics class, Samantha Hughson ’19 rarely asked questions because she didn’t want her fellow students to think she couldn’t handle the coursework.

That is no longer a problem.

Hughson, a computer science major and math minor, is the founder and president of Clark Women in STEM (Science, Technology, Engineering and Math), a student-run group that discusses the issues surrounding the inclusion and advancement of women in technical professions.

“When I was coming to college, my father said if they didn’t have a club like this, I needed to start one,” Hughson recalls. She launched Clark Women in Stem her sophomore year, attracting students from technology and the sciences (the group is open to men, too) to alumnae panels and other events.

Last year, Hughson attended the Grace Hopper Celebration for Women in Computing, which addressed topics like pay equity, advancement opportunities, and workplace harassment. “The conference theme was that we’ve made progress, but we’re not there yet,” she says.

Hughson left feeling empowered and optimistic, then flew directly to South Carolina to interview for an internship with Boeing. “I was surrounded by all guys interviewing for the same job. It was a jolt of reality.” She spent this summer interning at Amazon’s Boston headquarters.

Growing up in Bothell, Washington, as the daughter of a Microsoft programmer (her father) — and a periodic visitor to the Microsoft campus — Hughson knew a technology career was in her future. At Clark, she has worked with Professor John Magee and a team of students to develop computer devices that will better serve people living with blindness and significant hearing loss.

She’s especially passionate about creating apps that help nonverbal children develop language skills, which is one reason she’s taken four semesters of American Sign Language classes. Hughson notes that some children, particularly those in developing countries, don’t have access to sign language and may not develop essential language skills early in life. The right apps can help bridge the gap. “I want to make technology more accessible to everyone,” she says.

Hughson knew she wanted two things when it came time to choosing a college: a strong computer science program and an opportunity to indulge her love for acting. A performer since the age of 5, Hughson found the perfect match of academics and the arts at Clark.

“It’s one of the things I love about Clark,” she says. “You don’t have to major in theatre to be 100 percent involved with it. I knew I wanted theatre to be a part of my life, and I can do that here. At a bigger college I wouldn’t have been able to do both.”

She has become as familiar a presence on the Clark stage as she is in the computer lab. She won the “Clark’s Got Talent” competition, singing a tune from the movie “Her.” And she’s performed in every Clark Musical Theatre production, including “The Drowsy Chaperone,” “Bonnie and Clyde,” and “Heathers.”

Last year, Hughson took the reins as CMT president, organizing and executing shows with as many as 70 student cast and crew members. Most recently she performed as Scuttle the seagull in CMT’s sold-out production of “The Little Mermaid.”

It’s a big, messy job, but “I run a tight ship,” she smiles. Whether captaining a lavish musical or transforming a jumble of code into an app that may one day change a life, Hughson is comfortable turning mayhem into magic.