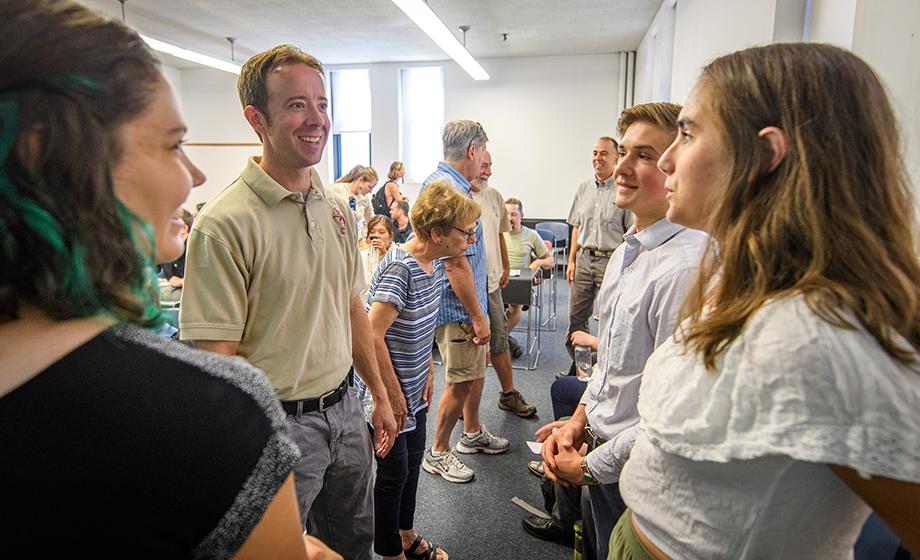 As a budding biologist in Wallingford, Pennsylvania, Elizabeth Lohr ’19 surveyed and mapped all the trees on her high school campus. Now an undergraduate at Clark University, she is pursuing her passion for trees on a much larger scale, through the Graduate School of Geography’s HERO (Human-Environment Regional Observatory) program.

“This program was almost custom-made to my interests. I really love learning everything about trees,” says Lohr, a double-major in biology and geography, Traina Scholar, and 2018-19 HERO Fellow.

For eight weeks this summer, Lohr and five other HERO Fellows checked the vitality of trees in Chicopee and Fall River and interviewed residents to see if Massachusetts’ Greening the Gateway Cities Program has paid off. The program aims to increase tree canopy by 10 percent in high-density neighborhoods by providing residents with trees and planting them along city streets. So far, conservation employees have planted more than 8,000 trees in 16 cities.

On July 12, the students presented their results to a roomful of stakeholders from the state Department of Conservation and Recreation (DCR), U.S. Department of Agriculture, Worcester Tree Initiative, and community members. Their data will be added to that of the 2017-18 HERO cohort, which focused on trees in the Gateway Cities of Holyoke, Chelsea, and Revere. Over 19 years, HERO Fellows have researched the interaction between humans and the environment, from residential lawn care to the area’s recovery from Asian longhorned beetle damage, and contributed data subsequently used by local, state, and federal officials.

“You’ve been doing this many years now, and it’s great to see the changes over time,” Mat Cahill, an urban forester for DCR’s Greening the Gateway Cities, told the student presenters. “This is usable information that we can take back to this program. Your work is valuable, and we appreciate what you do.”

In June and July, the students checked 2,271 trees planted in Chicopee and Fall River; about 92 percent had survived. Among their findings:

Based on feedback from residents, the students suggested more outreach and communication from planting organizations, including yard signs that denote trees planted by the organizations; more fliers; and expanded electronic communications.

Besides expanding their research and presentation skills, HERO Fellows receive an eight-week stipend, academic credit for independent projects they will complete in the upcoming year, and funding to attend and present research at the Association of American Geographers’ annual meeting. They will present posters at Clark’s Fall Fest and Academic Spree Day research events.

Lohr’s independent research project will focus on where particular tree species are planted, and how that affects their survival.

When she came to Clark, she fancied herself a biologist. Then she took American Cities, a geography class taught by Professor Martin, now director of the Graduate School of Geography, who oversees the HERO program with Professor Rogan. Lohr chose the course to fulfill the “Historical Perspectives” requirement under Clark’s Program of Liberal Studies curriculum.

“I thought, ‘This is a great way of thinking about things; everything is spatial.’ So I started taking more geography courses, and took it on as a minor, and then as a major,” she says.

Martin’s class also sparked her interest in urban studies, which she sees as naturally co-existing with a biology major.

“It’s exactly where my interests lie, where biology and geography overlap,” she says. “Urban studies is so fascinating because at the rate that urban areas are growing, if we want to have a sustainable society, we need to start thinking about urban ecology. This is a great way to start thinking about what the tree canopy in a city is like, and how we can make it better.”