Mark Vital ’83 has got veterans covered 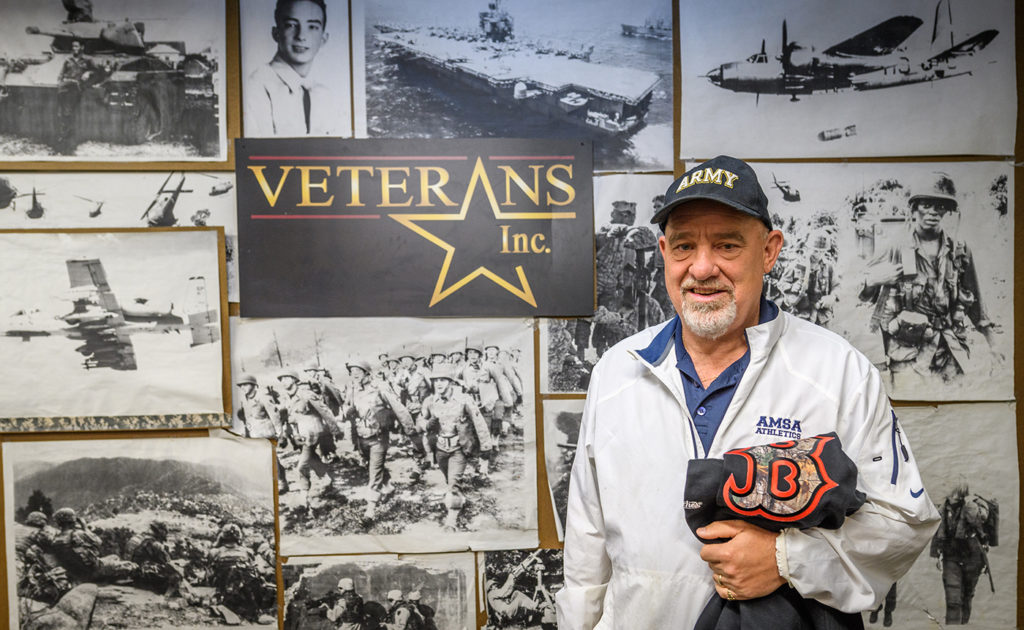 During his first year as a teacher at the Advanced Math and Science Academy in Marlboro, Mass., Mark Vital ’83 volunteered at a Christmas Eve breakfast for homeless veterans. “We had a lot of fun,” he says. “I spoke with an older man, probably a Vietnam vet, who was wearing a Washington Redskins sweatshirt. I warned him to be careful, because he was in Patriots nation.”

The vet quietly told Vital the sweatshirt was the only shirt he owned. At that moment, Sweats4Vets was born.

Vital founded the organization with a simple goal: to provide sports-related sweatshirts to homeless veterans each Christmas. Since 2011, he has done just that.

Homelessness is a very complicated issue for vets, Vital says. Many suffer from mental illness and substance abuse — particularly younger vets, who could be fighting PTSD, bipolar disorders, and depression — and have trouble with regimented rules at a shelter. “They have to eat when they’re told, turn off the lights at a certain time, go to specific counselors,” Vital says.

Less than 50 percent of them last 30 days in a shelter, he says. Instead, they choose to be homeless on their own, with no rules. Many turn to self-medicating. “Heroin dealers know they have a captive audience,” he adds.

“I don’t care if you’re an addict, what war you fought in, or if you have a mental illness,” Vital says. “I want to get you a warm Patriots hoodie for Christmas.”

In 2017, the Sweats4Vets campaign delivered 1,137 sweatshirts — surpassing Vital’s goal of 1,100 — and supported 54 facilities for homeless vets across New England. The sweatshirts are individually wrapped by Boy Scout and Girl Scout troops, youth sports teams, and other groups. The vets also receive gloves or a scarf.

One-third of the donations received are monetary; the rest are actual donated sweatshirts. Vital says that in December, his garage becomes Santa’s workshop. “I’m the sweatshirt king of the world,” he laughs.

Vital now spends Christmas at the New England Center for Vets in Boston. “Some of these guys are like kids – they’re so excited opening their Christmas presents,” he says.

Vital is a veteran himself. He was commissioned as a second lieutenant the day after he graduated from Clark and served in the Army Corps of Engineers from 1983 to 1987.

While at Clark, he was the university’s only ROTC student. He majored in psychology, but fondly remembers his Women in the Military class taught by Professor Cynthia Enloe. “I was the only man in the class,” he says.

After four years in the Corps of Engineers, Vital returned to Worcester to coach track at Clark. He now coaches at the high school level as well as teaching English and psychology. He’s also getting his Christmas list together. You can never start too early.