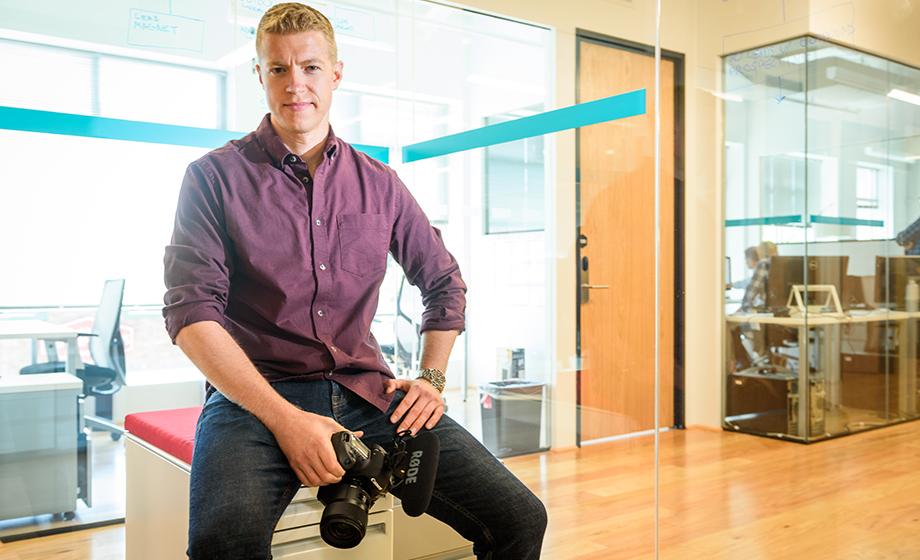 The “humble beginning” origin story is a common theme for many entrepreneurs.

Arthur Guinness signed a 9,000-year lease on a dilapidated brewery in Dublin.

An imaginative 22-year-old named John Pemberton concocted Coca-Cola, selling bottles of syrup to a local pharmacy for five cents each.

Add another name to this list of scrappy young entrepreneurs: Sam Shepler ’11, MSPC ’12, a double major in screen studies and communication and culture, who launched two companies while still in his 20s.

Now, with a brand new startup, Testimonial Hero, Shepler is ready to embark on his next entrepreneurial adventure.

A new age of corporate marketing video production has dawned. In the past, corporate videos — used for training, recruiting, customer testimonials, and advertising — often came across as stale and inauthentic. While still at Clark, Shepler and his soon-to-be business partners perceived a growing demand for a new, fresh type of branding opportunity. They recognized that corporate clients wanted video marketing that appeared genuine and human.

Shepler’s new company continues in the same vein. His strategy is to “hook” viewers by capturing captivating stories and strong emotional reactions on video — that is, showing versus telling. The videos he has produced for Skyscope — and now Testimonial Hero — humanize his corporate clients, revealing the people and stories woven into the company culture. His astute insight into this budding cinematic trend has allowed Shepler to succeed in a growing competitive market.

Although he had been shooting videos since childhood, Shepler’s production skills soared at Clark. He benefited from taking classes with professors who nurtured his creative spirit, accepting his assignments as video projects instead of papers. Given his all-consuming passion for video, Shepler “learned that a healthy obsession was possible … a positive and necessary thing for growth and achievement.”

Once enrolled in Clark’s Master of Science in Professional Communication program, he took Professor Julie Frechette’s social media marketing course, which required him to submit assignments as public blog posts. A Worcester entrepreneur, Mark Arvanigian, ran across Shepler’s blog and liked the material so much he offered the student a job at his e-commerce company.

“Working for him gave me the confidence and self-belief that I could do it,” he says.  “Once you can truly see yourself doing it, and envision the outcome you want, everything becomes much easier.”

Now that he’s achieved success, Shepler continues to give back to the academic community that supported him from the beginning. He mentors Clark students and provides internships and professional development workshops, building a pipeline of entrepreneurs between the University and his Boston-based startup.

Shepler offers this advice to budding entrepreneurs: “Pay attention to the problems that individuals and businesses have, and figure out how to solve them in a different or better way.

“You need to involve your skills and your interests, but fundamentally, entrepreneurship is not about you,” he adds. “It’s about your customer, understanding their problems, and solving them.”

Shepler urges anyone interested in entrepreneurship not to wait, but to jump into the mix. “Thanks to the internet and social media, it’s easier than ever to talk to any market figure out their pain points and what they desire,” he says. “Start by finding a significant problem, and then put your own spin on the solution.”

As Shepler has demonstrated, the next 22-year-old with an unconventional idea and a strong work ethic is just waiting to be discovered.